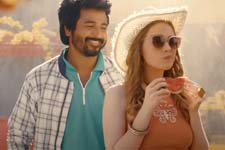 Sai Tulasi Neppali / fullhyd.com
EDITOR RATING
6.5
Performances
Script
Music/Soundtrack
Visuals
6.5
7.0
8.0
8.0
Suggestions
Can watch again
No
Good for kids
No
Good for dates
Yes
Wait for OTT
Yes
Up is down and down is up in Anudeep KV's latest comedy-drama, Prince. It's his signature style: turn a deeply-rooted prejudice on its head and make a big joke of it. In Prince, a small-town man bars his son from marrying a girl of the same caste or religion (call it reverse casteism?). A high-school teacher bunks classes to watch matinees, and encourages his students to cheat on exams. A cool dad, a mischievous teacher, a servile goonda, an India-loving Brit girl... these are just some of the characters that make up Prince's topsy-turvy world.

More so than in Anudeep's previous films, Prince has a solid storyline - and one with a weighty theme, too. When the "mischievous teacher", Anand (Sivakarthikeyan), falls in love with a foreign girl, Jessica (Maria Riaboshapka Vijayan), his "cool dad" Viswanath (Sathyaraj) is ecstatic at first. But then he realises that the girl is British, and his patriotic idealism can't stand the thought of fraternizing with colonisers.

Even the townspeople rise against this cross-country romance. But nobody can quite articulate why. They think they have righteous anger over Britain's 200-year oppressive rule, but in reality, all they have are simple prejudices and selfish reasons. For example, one villager is upset that his children watch too much foreign TV. And another is a land shark who wants to drive away Jessica's family and occupy their home.

With a heavy dose of college-level humour, the story also teases apart one of the biggest hypocrisies of Indian culture: that we are nationalistic and prideful but still crave the White Man's approval. And we still slobber over fair-skinned beauties. In an extended comedy sequence that pokes fun at our elevation of the English language, a vegetable-seller is too embarrassed to admit to Jessica that he doesn't know what a "bottle gourd" is.

However, Prince's writing is so caught up in satirizing Indian nationalism that it hurries through other portions of the story. Anand and Jessica's romance is childish and awkward - even a peck on the cheek induces blushing. Fortunately, Thaman's music score with three vibrant dance numbers does somewhat make up for the leads' lack of chemistry.

There is also a sub-plot that involves a lot of teeth-gnashing and angry stares between Jessica's father and the land shark, but it gets lost in the weeds by the end.

Despite the warts, however, die-hard fans of Anudeep's repertoire will still be pleased with Prince - he brings out all his favorite tricks here. Characters use twisted logic or talk in circles to diffuse conflicts. For example, at the beginning of the movie, Viswanath breaks up a fight between two castes by arguing that a person's family is the source of one's beliefs. If a person were switched at birth by a deviant nurse, they'd grow up with an entirely new belief system, he postulates. So the real reason for caste feelings? Birthing nurses!

Obvious facts are also made to sound funny, like when Anand introduces his father as a man who is "older than him" (vayasulo nakante peddavaru). And just as in Anudeep's previous comedies (Jathi Rathnalu or First Day, First Show), there is an epic closer: an utterly nonsensical monologue jam-packed with puns and absurd tangents.

This single-minded focus on getting laughs wouldn't be such an issue if the characters were written and had acted better. While Sathyaraj and Sivakarthikeyan nail their comic timing and body language, the film's entire foreign cast is abominable. Maria's dubbing, even the English bits, is so horrendous, it is as if the recording studio grabbed a passerby, sat them with a microphone and asked them to parody a foreign accent. Maria's acting, her fake laugh and her aloof expressions dampen the lighthearted vibe of the movie. She comes across as an exotic object on the screen - someone to be looked at and coveted but serving no real purpose.

Prince is ultimately an Anudeep movie through and through. Which means that Comedy, with a capital 'C', is its main character, or maybe even the only character of import. It is the hurricane that gobbles up the entire story and warps it for laughs. And just as every storm weakens and peters out, so does Prince by the end. It exhausts you in the way a two-hour Reel might. 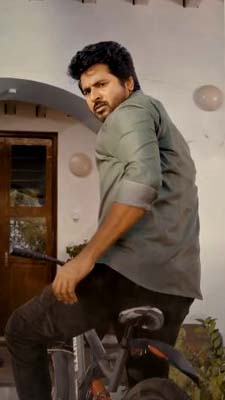 ADVERTISEMENT
This page was tagged for
Prince telugu movie
Prince reviews
release date
Sivakarthikeyan, Maria Riaboshapka
theatres list
Follow @fullhyderabad
Follow fullhyd.com on
About Hyderabad
The Hyderabad Community
Improve fullhyd.com
More
Our Other Local Guides
Our other sites
© Copyright 1999-2009 LRR Technologies (Hyderabad), Pvt Ltd. All rights reserved. fullhyd, fullhyderabad, Welcome To The Neighbourhood are trademarks of LRR Technologies (Hyderabad) Pvt Ltd. The textual, graphic, audio and audiovisual material in this site is protected by copyright law. You may not copy, distribute, or use this material except as necessary for your personal, non-commercial use. Any trademarks are the properties of their respective owners. More on Hyderabad, India. Jobs in Hyderabad.