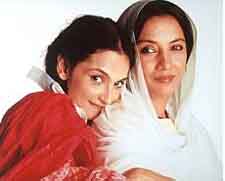 Feroz Hassan / fullhyd.com
EDITOR RATING
10
Performances
Script
Music/Soundtrack
Visuals
NA
NA
NA
NA
Suggestions
Can watch again
NA
Good for kids
NA
Good for dates
NA
Wait to rent it
NA
Remember Hum Aapke Hain Kaun? Of course, you do! But do you hate it and all the other marriage videos that passed for movies in its wake? It was just too much to read that such movies celebrated the institution of family blah, blah, blah. What baloney! All those guys should come and watch Hari Bhari. This is an NFDC film that carries the mandatory messages on family planning, women's rights and so on, but in the process it offers a very interesting look into the workings of a joint family. Despite the strong proclamations on the posters that this a 'heroic tale of five women', it is no Mrityudand, and thankfully so.

So now out with palatial mansions with a bhabi, bhayya, jijajee, and back to the village where Ghazala (Shabana Azmi) is having trouble with her husband as he keeps turning her out. He does it once too many times and Ghazala is back with her family for good. Here there are few more women with a few more sob stories. Her sister-in-laws are diametrically opposite, with Najma (Alka Trivedi) looking after the chores and Afsana (Nandita Das) having a penchant for sharp talk. Najma has had seven children of whom two survive and when she considers an operation, she finds stiff opposition in Afsana who gets a shock when she discovers that her husband Khursheed (Rajat Kapur) has gone in for vasectomy.

As for the men, Ghazala's husband is a promiscuous man, while Najma's is the one who looks after the whole family. Khursheed looks to go away to Meerut and is looking to get some money out of his brother to buy a house there.

Finally, there is Ghazala's daughter, Salma (Rajeshwari Sachdev), who goes to school and dreams of becoming a teacher. She is on her way to meeting the same fate as the other women as her mother looks to marry her off to a 40-year-old rich man. But the movie ends with her mother giving in after the granny is diagnosed with cancer, said to be long-term fallout of early marriage.

The climax is proof enough that this is no two-hanky affair and Shyam Benegal's touch ensures that it is no Mala-D campaign. It suggests that the rot of dogma has to stop somewhere and that it might. Here, it stops with Salma. The screenplay is amusing and touching in turns, as the characters do have problems with each other, but everyone more or less accepts the quotidian. It is a strangely gregarious film, shorn of the superficial bonhomie of the earlier mentioned film.

Performances are expectedly exceptional, but it's the music score that is the surprise. From the title track in our very own Dakhni to the folk touch of other parts, it is a bonus. Believe me, it's an entertaining movie, unless of course you have been numbed by what passes for entertainment on the mainstream circuit.
Share. Save. Connect.
Tweet
HARI - BHARI SNAPSHOT

ADVERTISEMENT
This page was tagged for
Hari - Bhari hindi movie
Hari - Bhari reviews
release date
Shabana Azmi, Nandita Das
theatres list
Follow @fullhyderabad
Follow fullhyd.com on
About Hyderabad
The Hyderabad Community
Improve fullhyd.com
More
Our Other Local Guides
Our other sites
© Copyright 1999-2009 LRR Technologies (Hyderabad), Pvt Ltd. All rights reserved. fullhyd, fullhyderabad, Welcome To The Neighbourhood are trademarks of LRR Technologies (Hyderabad) Pvt Ltd. The textual, graphic, audio and audiovisual material in this site is protected by copyright law. You may not copy, distribute, or use this material except as necessary for your personal, non-commercial use. Any trademarks are the properties of their respective owners. More on Hyderabad, India. Jobs in Hyderabad.