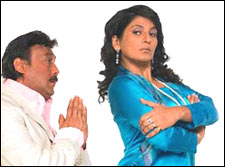 Samrat Sharma / fullhyd.com
EDITOR RATING
1.0
Performances
Script
Music/Soundtrack
Visuals
NA
NA
NA
NA
Suggestions
Can watch again
NA
Good for kids
NA
Good for dates
NA
Wait to rent it
NA
Rohit Kaushik's debut film as director, Mera Dil Leke Dekho, is like a wax fruit. It looks like an apple, and if you hold it in your hand, you might still be fooled into thinking that it is an apple. But when you take a bite, instead of a delicious juicy apple core, you get bitter wax instead.

Mera Dil Leke Dekho looks like a comedy. Some jokes on the promos may even make you think that it is a comedy, but when you actually sit down to watch it, it leaves a bad, bitter taste in your mouth.

This is, of course, not to say that it is terribly deceptive in its packaging or promotions. It's not. It’s one of those films that flies under most radars, and only the most hardy (or foolhardy?) of movie fans actually register a blip on their movie-dar. This from a movie being touted as Jackie Shroff's comeback film.

Produced by Shatrughan Sinha's Shotgun Movies, this film teams up a debutante director with a first time screenplay writer in Nandita Puri. Big mistake. Both of them are clearly not adept at what they purport to do, and have a very loose grip over their story, characters, and the themes they are trying to handle.

This would not be so much of a problem if the actors had any charisma, or the film had any genuinely funny moments. While the actors are largely uninspiring, with the exception of Archana Puran Singh and Koel Purie who at least do a serviceable job, the humor is open to your interpretation of funny.

London-bred Punjabi girl Archie (Koel Purie) is desperate to get married, when she meets Rahul (Punit Tejwani) in London and promptly falls in love with him. Rahul, meanwhile, is disinterested in commitment. In bizarre twist after bizarre twist, she lands up in India to marry him, but ends up believing that he's gay, and that he is in love with his friend.

This is compounded by the fact that Rahul's mother (Archana Puran Singh) starts believing the same thing. She also believes that her husband (Jackie Shroff) is bisexual, and is having a gay affair with her son's friend. This confusion leads poor Archie to fall in love with Rahul's gay friend, thinking that he is the only straight one.

If the plot seems confusing, you should see it being executed in bad gay joke after bad gay joke masquerading as humor. I am willing to bet that even if (God forbid) crass, oafish, distasteful comedy is your cup of tea, you will find the goings on in this film unfunny and largely uninspired.

Of the cast, Singh, being used to over-the-top comedies on television and film, does her usual schtick and manages to keep her character in control, and makes her presence felt by injecting her brand of comedy to the proceedings. Purie manages to do a passable London Punjabi girl impersonation, and might even raise a laugh or two. Shroff is singularly disinteresting in his hammy portrayal of a womanizer, and has three stock expressions to fit all scenes. Which is more than that can be said about the rest of the cast, including the lead guys.

Please don't mistake this film for what it is not – a smart comedy about sexual orientation and relationships. Hell, even if you don't even expect more than 5 laughs out of the whole thing, you might be disappointed with just 3. I strongly recommend catching repeat viewings of Lage Raho... or Khosla Ka Ghosla, instead of wasting your time on this film. This is a movie that takes unnecessary digs, infuses sexual humor, and yet manages to come out a cropper in the funny quotient. Stay away and save yourself a migraine.
Share. Save. Connect.
Tweet
MERA DIL LEKE DEKKHO SNAPSHOT

ADVERTISEMENT
This page was tagged for
Mera Dil Leke Dekho
dekkho
Mera Dil Leke Dekkho hindi movie
Mera Dil Leke Dekkho reviews
release date
Follow @fullhyderabad
Follow fullhyd.com on
About Hyderabad
The Hyderabad Community
Improve fullhyd.com
More
Our Other Local Guides
Our other sites
© Copyright 1999-2009 LRR Technologies (Hyderabad), Pvt Ltd. All rights reserved. fullhyd, fullhyderabad, Welcome To The Neighbourhood are trademarks of LRR Technologies (Hyderabad) Pvt Ltd. The textual, graphic, audio and audiovisual material in this site is protected by copyright law. You may not copy, distribute, or use this material except as necessary for your personal, non-commercial use. Any trademarks are the properties of their respective owners. More on Hyderabad, India. Jobs in Hyderabad.