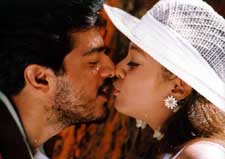 EDITOR RATING
7.0
Performances
Script
Music/Soundtrack
Visuals
NA
NA
NA
NA
Suggestions
Can watch again
NA
Good for kids
NA
Good for dates
NA
Wait for OTT
NA
It is surprising to see Ajit, who has an action hero image in Tamil Nadu, donning the role of a soft guy silently pursuing his obsession of becoming a music director. And this, despite the fact that no one has the time or the inclination to listen to him for eight long years, forget about giving him an opportunity. Unlike in routine film drama, Ajit does not turn the heat on the filmmakers, but resigns to his fate. Isn't it strange? Strange it has to be, for it is a middle-of-the-road cinema trying to fuse the art and commercial elements to make it appealing to the people. But will it succeed?

Ajit aspires to become a music director in this dubbed version of the Tamil hit Mugavari, and from 1991, in every diary of his the first sentence would be that he would become the music director 'this year', and in 1999 it is 'definitely'. The film is set in 1999, and there seems to be no hope of this talented artiste becoming a music director.

But 1999 turns out to be a good year as he gets a girlfriend in Jyotika, who turns out to be the most understanding woman that he has come across in his life, apart from his brother Raghuvaran and his friend Manivannan. All of them see the spark of genius in this young man and feel that it is only a matter of time.

But time can be the worst villain, and Ajit cannot even enjoy the company of the bubbly Jyotika with the goal lurking in the far corners of his mind. His hopes and those of everyone else are dashed to the ground when one fine morning Ajit decides that enough is enough about music and settles down to a supervisor's job in his uncle's company. This he does to help his brother in running the family. Is his decision a right one? Well, decide for yourself.

It is a film that begins well and ends well, but is a drag in between. There is something missing in the film for it to strike a chord with the audiences. Watching Ajit is like watching Arjun in Rhythm - subdued, collected, and an oasis of calm. Despite being a good film, Rhythm couldn't do well because of the slow pace of the movie. And Chirunama, too, might end up like that. This one has another drawback: it's dubbing is horrible.
Share. Save. Connect.
Tweet
CHIRUNAMA SNAPSHOT

ADVERTISEMENT
This page was tagged for
chirunama movie review
Chirunama telugu movie
Chirunama reviews
release date
Ajit, Raghuvaran
Follow @fullhyderabad
Follow fullhyd.com on
About Hyderabad
The Hyderabad Community
Improve fullhyd.com
More
Our Other Local Guides
Our other sites
© Copyright 1999-2009 LRR Technologies (Hyderabad), Pvt Ltd. All rights reserved. fullhyd, fullhyderabad, Welcome To The Neighbourhood are trademarks of LRR Technologies (Hyderabad) Pvt Ltd. The textual, graphic, audio and audiovisual material in this site is protected by copyright law. You may not copy, distribute, or use this material except as necessary for your personal, non-commercial use. Any trademarks are the properties of their respective owners. More on Hyderabad, India. Jobs in Hyderabad.