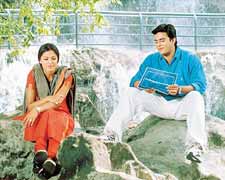 Smriti Kashyap / fullhyd.com
EDITOR RATING
1.0
Performances
Script
Music/Soundtrack
Visuals
NA
NA
NA
NA
Suggestions
Can watch again
NA
Good for kids
NA
Good for dates
NA
Wait to rent it
NA
POOF! That is the scriptwriter making a hasty exit as he manages to palm off his crap to the unsuspecting producers - Paravasam being the product. Here's a poison is so wretched, it's being overrated when you give it one star. The flick sucks, and how!

Dr. Madhava (Madhavan) has just been in a hit film, his first, and makes every gal this side of the dosa swoon. He's hot and obviously uncomfy with the whole thing. And so like a nice Telugu boy, he tells his mom to find him a suitable match. And thus he finds himself in matrimonial bliss with Simmi (Simran, who incidentally is good at playing wife).

But as fate would have it, the marriage sours soon with the unexpected arrival of one 'Plumcake Rekha' (Sneha). This female is from London, and during her medical school, has had a fling with Madhava. She gets pregnant, and unknown to him, has the kid. She turns up years later with the kid in tow to wish the couple good luck. Heck, don't look at me, I just review the tripe. Really, you can't believe the stuff you're expected to digest these days.

Anyway, the whole shaadi thing goes whacko and Simmi walks out on him. They remain good friends, though. And then comes the worst part (for all of us, too) - her father kicks the bucket. The poor lass gets all lonely, and the great friends that she and her ex are, they decide that they should get married - not to each other, silly, but to some vague persons whom they hardly know. And from the looks of it, they seem to be hardly bothered by this fact.

So each ex-spouse gets busy fixing the other with the new person - people whom we all know as being extras in the flick. Simmi and Madhava seem to be real busy trying to get married just for the heck of it - hell, it's a lifelong commitment we're talking about here, not a date for the prom.

The race to walk down the altar begins, but the bummer is that the couple still harbor feelings of love for each other, and they obviously haven't heard about the benefits of open communication - and hence all the heartache. If only they could have had a tête-à-tête about their real feelings, all that film roll and Amrutanjan could have been salvaged. The movie continues to shake its death rattle, and just when you think that it will end, there's another twist, and the rattle continues.

The film elicits a bit of empathy from the audience - Simran and Madhavan make a handsome couple and you really wish they'd get back together; but then the director throws a real troll called Anandam (Lawrence) in the way. This guy wants to marry Simmi and vice versa, but for some vague reason, we have to watch him dance through two whole songs - thanks a lot Lawrence, we know you're fab; if you can just move out of the way, we'd like to know what happens in the end.

No such luck. The inane songs and scenes are dished out with religious regularity (just about every scene is punctuated with a song) and just like the Energizer bunny, the movie keeps going on and on and on and on...

You'd think that A R Rehman would play savior, but no, he dishes out the worst score of his career. None of the songs is hummable, and you go home with the shortchange complete.

This is veteran director K Balachander's 100th film, and it's such a shame that it doesn't quite live up to the niche that he has carved for himself. It really is disappointing, and we hope he'll have better luck (and scripts) the next time on.
Share. Save. Connect.
Tweet
PARAVASAM SNAPSHOT

ADVERTISEMENT
This page was tagged for
Paravasam telugu movie
Paravasam reviews
release date
Madhavan, Simran
theatres list
Follow @fullhyderabad
Follow fullhyd.com on
About Hyderabad
The Hyderabad Community
Improve fullhyd.com
More
Our Other Local Guides
Our other sites
© Copyright 1999-2009 LRR Technologies (Hyderabad), Pvt Ltd. All rights reserved. fullhyd, fullhyderabad, Welcome To The Neighbourhood are trademarks of LRR Technologies (Hyderabad) Pvt Ltd. The textual, graphic, audio and audiovisual material in this site is protected by copyright law. You may not copy, distribute, or use this material except as necessary for your personal, non-commercial use. Any trademarks are the properties of their respective owners. More on Hyderabad, India. Jobs in Hyderabad.