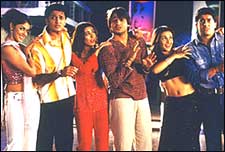 Deepa Menon / fullhyd.com
EDITOR RATING
5.0
Performances
Script
Music/Soundtrack
Visuals
NA
NA
NA
NA
Suggestions
Can watch again
NA
Good for kids
NA
Good for dates
NA
Wait to rent it
NA
The trailers of Masti inspired two typical reactions. Either you thought this was going to be one hysterical, rip-roaring ride, or you dreaded the level of toilet humor that would embarrass a 13-year-old. Masti confirms both suspicions.

This film is so thoroughly stupid that it comes out the other side. And actually makes you laugh, thanks mostly to some well-placed one-liners. But then towards the end, the entire script turns around and decides to make you pay for those few guffaws that you might have enjoyed earlier. And man, do you pay.

The story is about three men whose lives are miserable because their wives are devoted, pretty and filthy rich. That, as we all know, is enough to bum anyone out. So to rejuvenate their flagging marriages (or so they assure themselves) they decide to have one wild fling each.

So when the three classmates meet up after years and compare their marital tragedies, they arrive at the conclusion that some frenzied sowing of oats is called for. But on the next review meeting, they realise they've been romancing the same Monica (Lara Dutta), and when she blackmails them for money, they have no choice but to steal from their wives. But after all that fuss - which, you, dear viewers, will have to slumber through - they find Monica dead in a stranded car.

Masti abounds in gags, which is a very appropriate name for some of the more revolting sequences. Satish Shah, for example, plays the resident homophobic who keeps running into Amar and Prem in compromising situations. Haha, isn't that funny, especially the sixtieth time around? Archana Puran Singh as the militant mother-in-law is tiresomely unamusing. Ajay Devgan, who plays the cop hounding the three guys, is decent but he isn't around much. So much for the suckeroos.

What works in its favor is that Masti doesn't take itself seriously at all and the three guys have great chemistry together, although Shivdasani is the real find. You just know there are going to be rip-offs on the three-drooling-guys theme sometime in the future, with one or more of the same actors. The lines are absolutely corny, and some of the jokes are actually painful, but there's such a deluge of punchlines that on the whole, you're a satisfied customer. So far, so good? Ah, wait till the tears start.

The guys finally discover that Monica was in cahoots with a knife-weilding maniac, who, predictably enough, won't stop at anything. To top it all they're being shadowed by the intimidating Devgan. Overcome by how deep they're in it, the guys finally break down and realise just how valuable their wives truly are. Then all three of them start crying with careless abandon, and you wonder if you just missed something.

To make matter worse, after things get irredeemably senti, they stay that way for a long, long time. Masti might've made it big, but sadly, all the goodwill it generates in the first half, it bludgeons to death in the last half-hour.
Share. Save. Connect.
Tweet
MASTI SNAPSHOT

ADVERTISEMENT
This page was tagged for
Masti hindi movie
Masti reviews
release date
Vivek Oberoi, Aftab Shivdasani
theatres list
Follow @fullhyderabad
Follow fullhyd.com on
About Hyderabad
The Hyderabad Community
Improve fullhyd.com
More
Our Other Local Guides
Our other sites
© Copyright 1999-2009 LRR Technologies (Hyderabad), Pvt Ltd. All rights reserved. fullhyd, fullhyderabad, Welcome To The Neighbourhood are trademarks of LRR Technologies (Hyderabad) Pvt Ltd. The textual, graphic, audio and audiovisual material in this site is protected by copyright law. You may not copy, distribute, or use this material except as necessary for your personal, non-commercial use. Any trademarks are the properties of their respective owners. More on Hyderabad, India. Jobs in Hyderabad.