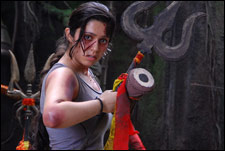 Deepa Garimella / fullhyd.com
EDITOR RATING
5.5
Performances
Script
Music/Soundtrack
Visuals
7.5
5.0
7.0
7.5
Suggestions
Can watch again
No
Good for kids
No
Good for dates
Yes
Wait to rent it
Yes
It takes immense talent to make uncharted territory look good. While the makers of Mangala might not have crafted a product that feels exactly like what audiences have come to expect post their previous sellout, it still is a fine example of the kind of talent Tollywood ought to make more space for (just like the film's witty tirade on Tamil filmmakers points out).

For one, there's a serious dearth of good woman-centric films around (the only heroine-oriented movies in recent times have belonged to the horror genre), and Charmme has been one actress who visibly (and repeatedly) forays into this category of films that are written mostly for the heroine.

Then, there's this entire glut of second-rung actors in our cinema that are rarely given their due - like Uttej, for example - and who need flicks like Mangala to be pushed to the front.

And although Mangala's horror and suspense are diluted by the writers' choice of infusing the story with mysticism, it is a slickly-made movie that deserves credit for its no-fuss approach to the plot.

Mangala is about this good-natured movie actress (Charmme), who is possessed by a dangerously dark spell cast upon her by a vengeful sorcerer (Pradeep Rawat). The man's son was unintentionally wronged by the actress, and the unfortunate incident ripples off into a dimension that wreaks total havoc on her life.

The plot is predictable, and the film takes twists and turns that you can figure out well in advance. But then, there are a few thrills that are nicely done. There's no tackiness in these scenes, and they suitably quench your anticipation. Horror fans, though, are likely to be put off by how few in number these thrills are.

One of the things that are interesting about Mangala is the movie's ongoing sub-plot on the heroine's film-in-the-making, which the director uses to have a hearty laugh at Tamil directors. Uttej plays a quietly-anguished movie producer here, and is hilarious in this well-written track. There's also that whole angle of Pradeep Rawat's character having some deeply dark powers, which is never explored, though.

The main flaw in Mangala is the whole of its closing half hour, when the story moves to the world of ash-covered agoras - nothing much actually happens here. Charmme is made to engage in a silly fight sequence when, as a possessed woman, she beats up some sleazy eve-teasers to pulp, and the story degenerates from then on. The plot is closed in a pretty disappointing way, in a climax that stands out more for a hyperactive Charmme and a horde of dancing agoras, than for anything else.

Charmme puts in a pretty good performance, but the people who stand out for their presence are on the sidelines. Subhash (who plays the "hero" of the film, as the heroine's trusted aide) is a talented actor, and his character has an endearing relationship with that of the leading lady. Vijay Sai is good, too, as are a number of several less-known faces.

Mangala has sleek, sepia-tinted visuals, and boasts of good taste in aesthetics overall. A good soundtrack helps the cause of the scares and thrills.

In all Mangala could have been a brilliant film. However, for those who champion the cause of the upcoming "multiplex genre" in local cinema, here might be a pretty decent find.
Share. Save. Connect.
Tweet
MANGALA SNAPSHOT

ADVERTISEMENT
This page was tagged for
mangala full movie
Mangala telugu movie
Mangala reviews
release date
Charmme, Subhas
Follow @fullhyderabad
Follow fullhyd.com on
About Hyderabad
The Hyderabad Community
Improve fullhyd.com
More
Our Other Local Guides
Our other sites
© Copyright 1999-2009 LRR Technologies (Hyderabad), Pvt Ltd. All rights reserved. fullhyd, fullhyderabad, Welcome To The Neighbourhood are trademarks of LRR Technologies (Hyderabad) Pvt Ltd. The textual, graphic, audio and audiovisual material in this site is protected by copyright law. You may not copy, distribute, or use this material except as necessary for your personal, non-commercial use. Any trademarks are the properties of their respective owners. More on Hyderabad, India. Jobs in Hyderabad.