Arjun plods on on a Mac, nods off while with his boss, enjoys junk cinema on weekends, eats junk food, scrolls junk on the social media for hours and sleeps late. His biggest fear in life is money.

Arjun is enjoying summer in his village. He wakes up early, leisurely strolls the fields, banters on about mundane topics, has delicious home-cooked food, watches old movies on an older television, and sleeps like a baby. His biggest concern in life is marriage. What kind of person will he marry? What kind of romance will he have? Will it have the feeling of that Ilayaraaja song he loves?

Ashoka Vanamlo Arjuna Kalyanam is about the latter Arjun. Mind you, the movie doesn't bring anything too novel to the screen. No other region in the world has explored arranged marriage as thoroughly as Indian cinema. But the way AVAK weaves its narrative leaves you spellbound.

Exhausted by the pestering from his family, relatives and people around, Arjun Kumar Allam (Vishwak Sen), a 33-year-old bachelor, decides to get hitched to any girl who says yes. His family's pursuit of a bride ends with Madhavi (Rukshar Dhillon), whose engagement with Arjun is set in her ancestral house in Ashokapuram. How the announcement of the lockdown tears apart Ashok's plans and creates chaos in this family ecosystem is the rest of the plot.

Let's first talk about what doesn't work in the movie - because a lot of things work pretty well. Somewhere after the second act, the screenplay becomes non-existent. The film runs out of solid plot points in the pre-climax portion, and the story just feels like it's waiting to end. Frankly, it feels like Arjun understood the point much before the film claims he has.

What also bugs you a little is the choice of a model-like actress for the role of Madhavi. In a film that's talking about the beauty in ordinariness, a shining, attractive face distracts the viewer from the stand-out, well-done elements of the movie. Tollywood's obsession with non-Telugu, fair-skinned actresses being cast as conventional Telugu women is puzzling, and movies like this make you realise the importance of actresses like Sai Pallavi.

Now, let's talk about what works. The brilliance of AVAK is that it's set in a single location. We have seen films needlessly incorporate large-scale CGI, and travel across borders and periods to make a small love story work. AVAK thumbs its nose at all of that. All it needs is a typical village home and a small terrace to sell you a gentle love story. And it does its job without missing out on any world-building details. In many big-budget movies, the filmmakers tend to show a world and not take the pain of building it. In just a single location in AVAK, we understand the Allams, and tap in to their family grapevine, the life of Arjun, his past love interests, his fears, his insecurities and, most importantly, how he treats the women in his life. The lockdown never feels shoehorned in for the sake of comedy - it just blends with the story.

And every dialogue in AVAK builds the character of the world. People talk about caste, emasculation, female birth ratio, occupations, and everyday food like upma all in the same paragraph. And it's not just the dialogue in the foreground - it's also the background chatter that's layered and exciting. In one scene, the elders from the groom's side can be heard demanding special sweets from the bride's family, and in another, a character says, "Memu Telanganollam, maaku maryaada okkate saripodu, Mutton kuda kaavale." (We are Telangana people, just respect isn't enough, we also expect meat). All of this while there is an engaging story running in the foreground.

Indeed, in today's larger-than-life world of KGFs and RRRs, AVAK nestles tenderly in the space between the real and the impossible - the plausible. Arjun doesn't beat up men because he is fearless - he hits a few of them more out of fear than anything else. Madhavi drools over him walking in a towel, in stark contrast to the way men tend to ogle at the women in our mainstream films. And she doesn't make it appear tasteless. Why shouldn't a 33-year-old, stout, hairline-receding Indian male appear attractive to the heroine, the film asks mildly.

Vishwak Sen, as acclaimed, delivers his career-best. In his previous films Sen never stood out for his performance - he appeared as a person-of-interest because of his taste in cinema. But for the first time, he leaves a lasting impact with his performance, diction and that invisible bodily communication. Yet, the best performer of the film is Goparaju Ramana who plays that foul-mouthed relative ready to nit-pick everything. He steals the show in every scene of his.

Karthik Palani's frames are lively and don't shy away from going wide. And especially in those wide frames, the film looks fresh. The native flavour of the music by Jay Krish leaves a unique signature. The songs are not regular chartbusters - they exist only to poetically elevate the plot, not the Youtube views. "Sinnavaada" and "Oo Aadapilla" are especially dense lyrically, and need attentive listening to be appreciated.

AVAK doesn't want to be a movie that puts Telugu cinema on the Indian map - it just wants to remain a pleasant memory. Sure, we need our KGFs and RRRs to have a mighty feast in the theatres, but we also need films that remind us that, on most days, we just eat a decent meal of rice and hot dal. Instead of categorising a film like this as an OTT watch, it's more rewarding to go to the theatre with family and enjoy this on the big screen.

Ravi Kiran Kola is a storyteller who needs our attention. Just like in his first film, his writing is culturally rooted and resonating. This new wave of young Telugu filmmakers is an extremely promising one. Their sensibilities, narrative choices and themes are diverse, and provide us with hope. Can't wait for the future of Telugu cinema! 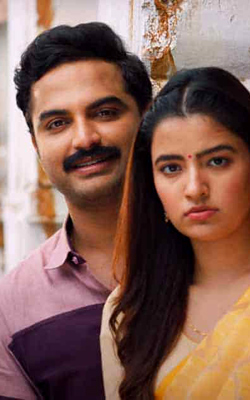 ADVERTISEMENT
This page was tagged for
Ashoka Vanamlo Arjuna Kalyanam telugu movie
Ashoka Vanamlo Arjuna Kalyanam reviews
release date
Vishwak Sen, Rukshar Dhillon
theatres list
Follow @fullhyderabad
Follow fullhyd.com on
About Hyderabad
The Hyderabad Community
Improve fullhyd.com
More
Our Other Local Guides
Our other sites
© Copyright 1999-2009 LRR Technologies (Hyderabad), Pvt Ltd. All rights reserved. fullhyd, fullhyderabad, Welcome To The Neighbourhood are trademarks of LRR Technologies (Hyderabad) Pvt Ltd. The textual, graphic, audio and audiovisual material in this site is protected by copyright law. You may not copy, distribute, or use this material except as necessary for your personal, non-commercial use. Any trademarks are the properties of their respective owners. More on Hyderabad, India. Jobs in Hyderabad.