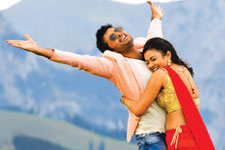 Ravi Kandala / fullhyd.com
EDITOR RATING
5.5
Performances
Script
Music/Soundtrack
Visuals
7.0
3.0
6.0
7.0
Suggestions
Can watch again
No
Good for kids
No
Good for dates
No
Wait for OTT
No
Safe - that is what Nithiin (a numerologically enhanced name) is playing these days. He pairs up with Karunakaran, the director who directed his idol (Pawan Kalyan), and makes a safe movie with some romance, some comedy and some decent music thrown in. The safe element here also includes an extended gay joke - something that we saw in Gunde Jaari Gallanthayyinde first. While that one was offensive, this one is plain boring. Either which way, he seems to now believe that having a gay joke in the movie guarantees a hit.

Chinnadana Nee Kosam is about Nitin (Nithiin), a typical Telugu hero with nothing to do. He has doting parents (Naresh and Kokila), who do nothing but encourage their boy to fall in love and get married. Nitin spots Nandini (Mishti Chakravarthy) one day on the road and instantly decides that she's the girl he's getting married to. He then starts pursuing her in typical Telugu-hero style.

Nandini, meanwhile, is doing her best to inveigle herself into the life of Reddy Garu (Nasser), a businessman who lives all alone. When she finds out that Nitin is close to Reddy Garu, she gets friendly with Nitin and gets close to Reddy Garu. Come interval and Nitin finds out that Nandini is actually from Barcelona and she's flown away taking Reddy Garu with her. He now sets out to find out the story behind the entire drama. What follows is a typical cat-and-mouse game between the two.

While the story is mostly old as the hills, the treatment is older than that. What keeps Chinnadana Nee Kosam going is the lightness that Karunakaran manages to infuse into the proceedings. The first half of the film proceeds at a fair pace and the comedy is decent enough to keep you from getting distracted. However, the screenplay wanders all over during the second half, and the humor gets forced - especially the aforementioned gay joke stretch.

Nithiin enacts his character with aplomb - he dances and emotes well, shoehorns in three references to his matinee idol Pawan Kalyan, and fights like a stud. Mishti, on the other hand, makes you wonder what directors look at while selecting these girls who cannot lip sync to save their lives. The supporting cast including Nasser, Naresh, Kokila, Ali and others do a standard job.

It is the festive season and there's nothing else in sight if the reviews of Mukunda are anything to go by. Chinnadana might be your safest (there's the safe word again!) bet this season until Pawan Kalyan himself arrives with Gopala Gopala.
Share. Save. Connect.
Tweet
CHINNADANA NEE KOSAM SNAPSHOT 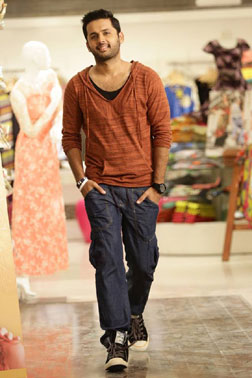 ADVERTISEMENT
This page was tagged for
Chinnadana Nee Kosam telugu movie
Chinnadana Nee Kosam reviews
release date
Nithiin, Mishti
theatres list
Follow @fullhyderabad
Follow fullhyd.com on
About Hyderabad
The Hyderabad Community
Improve fullhyd.com
More
Our Other Local Guides
Our other sites
© Copyright 1999-2009 LRR Technologies (Hyderabad), Pvt Ltd. All rights reserved. fullhyd, fullhyderabad, Welcome To The Neighbourhood are trademarks of LRR Technologies (Hyderabad) Pvt Ltd. The textual, graphic, audio and audiovisual material in this site is protected by copyright law. You may not copy, distribute, or use this material except as necessary for your personal, non-commercial use. Any trademarks are the properties of their respective owners. More on Hyderabad, India. Jobs in Hyderabad.