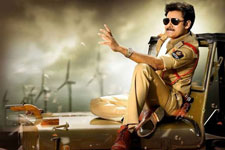 Ravi Kandala / fullhyd.com
EDITOR RATING
4.0
Performances
Script
Music/Soundtrack
Visuals
5.0
2.0
4.0
4.0
Suggestions
Can watch again
No
Good for kids
No
Good for dates
No
Wait for OTT
No
There is such a thing as trying too hard. And when someone does it, it shows clearly, and is generally not very pretty. Such a thing happened in Sardaar Gabbar Singh around halfway into the second half. In this scene, Pawan Kalyan and Brahmanandam are facing off in a cowboy-style shootout. Brahmi manages to shoot Pawan's hat off, and then Pawan shoots a couple of bullets that end up taking Brahmi's pants off. He then leapfrogs off the screen. And there was pindrop silence in the theatre. Not a chuckle, not a single laugh, not even a sarcastic snigger.

That pretty much sums up the movie as well. In every scene of Sardar Gabbar Singh, you see the desperation to repeat the success of Gabbar Singh. Some of the elements that succeeded in part one succeed here, too - those are Pawan Kalyan's swagger and his mannerisms, and some crowd-pleasing elements that again involve him. And that's about it. In short, Pawan Kalyan works, and nothing else does.

For starters, the script - if you're going to make Sholay again, at least give it a modern twist. Sardaar Gabbar Singh has a plot as old as the hills, and plot devices older than the Mahabharata. The plot involves a village, Rattanpur, which is bossed over by Bhairav Singh (Sharad Kelkar). There is a royal family headed by Princess Arshi (Kajal Agarwal) that tries to do good to the village, but they are helpless against Bhairav Singh. The Dalapati of the royal family, Harinarayan Singh (Mukesh Rishi), requests an honest police officer who can do some good to the village, and in comes Sardaar Gabbar Singh (Pawan Kalyan).

How Sardaar demolishes Bhairav Singh's empire, falls in love with the princess, dances to songs in Switzerland and tries his damnedest to repeat the success of Gabbar Singh forms the rest of the 165-minute plot.

Sardaar Gabbar Singh has so many loopholes, it is difficult to decide where to begin. For starters, the whole film is shot on two different sets, and the village set that the majority of the movie is shot on looks too fake to believe such a place would exist. Then, the plot has too many characters whose arcs are never completed. Bhairav Singh, for example, is already married. His wife keeps mutely staring at him whenever he expresses his desire to marry the princess, and in the end, when he is beaten up by Gabbar Singh, she is seen jumping over to the latter's side without so much as a word.

Then, the villagers are living in refuge after their entire village has been uprooted and turned into a mine, but there is nothing that Gabbar Singh really does for them despite visiting them. And the antyakshari scene that was such a success in the first part is rehashed as a Sangeeth scene in this one, but only ends up compounding your agony further.

The other issue is the villain himself. All Bhairav Singh does is scream at the top of his voice and make empty threats. All his henchmen, too, walk around glaring at Gabbar Singh, but when the time comes, they fall without as much as landing a punch on him. The plot devices used are terrible as well. When a rich and powerful mining baron wants to get a police officer out of his way, he plants evidence of corruption and gets him suspended - can it get any more routine than that?

Performance-wise, Pawan Kalyan does his best to satisfy his fans - and even his brother's fans. He imitates Chiranjeevi's famous veena step, dances to Shankar Dada Zindabad and does some of his Kung Fu moves as well. Kajal Agarwal is good as the helpless princess. Sharad Kelkar is ineffective, and the remaining cast hardly get any scope. A host of comedians are in the movie, but they barely get a dialogue or two.

The music is less than enchanting, and the songs shot in Switzerland seem to have been done in a desultory fashion. There is no finesse in the song placement, either.

Sardaar Gabbar Singh will surely leave a sour taste among the hardcore fans as well - after all you want to see your hero pulling off roles effortlessly, and not making all sorts of compromises for success. Just watch Gabbar Singh again - that one's nearly always worth another watch.
Share. Save. Connect.
Tweet
SARDAAR GABBAR SINGH SNAPSHOT 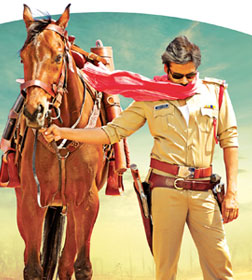 I expected a better knowledge from you in terms of ratings AD was a blockbuster, meaning all film lovers watched it and justified the 8,5 given by FH.
Comparing it to Revenant is like comparing oranges and apples.
Swaroop Thotada on 8th Apr 2016, 8:44pm | Permalink
AD was a crowd pleaser, and may be a blockbuster in terms of the business it has done. But that's no reason to give it a better rating. It is a cliche ridden film that takes its audience for granted at numerous places.
Jayz on 8th Apr 2016, 7:58pm | Permalink
I never compared the movies..I compared the rating given to the movies....AD maybe a blockbuster and all,but it was a cliche filled, predictable movie which showed the " hero" slapping around his employees for fun.Average is a generous description for film..
The Common Movie Goer on 8th Apr 2016, 10:10pm | Permalink
The ratings on fullhyd.com are not usually reflective of the content, Jayz. The ratings are more speculative in nature and are the reviewer's prediction of how well he/she expects the movie to do in general. His/her views are reflected accurately in the actual body of the review. There are times when there is no sync between the two.

Since fullhyd tries to be brutally honest and needs to grab eyeballs/traffic at the same time, they strike a middle path. This is just my observation and need not be accurate. Personally, I hated AD. And any chance I get, I keep pointing out in the comments section that Raghuvaran B.Tech. deserved a 10. However, it received a 6.0 which eventually turned out to be a measure of how well the movie did at the box office.

Some of my other comments on fullhyd also harp on how some stupid movies like Temper which deserved a 0 ended up getting a 6.5. (Check out my comment in Temper's review). At the end of the day, the rating is at the discretion of the reviewer and takes into account other factors.

ADVERTISEMENT
This page was tagged for
sardar gabbar singh full movie in telugu
Sardaar Gabbar Singh telugu movie
Sardaar Gabbar Singh reviews
release date
Pawan Kalyan, Kajal Agarwal
Follow @fullhyderabad
Follow fullhyd.com on
About Hyderabad
The Hyderabad Community
Improve fullhyd.com
More
Our Other Local Guides
Our other sites
© Copyright 1999-2009 LRR Technologies (Hyderabad), Pvt Ltd. All rights reserved. fullhyd, fullhyderabad, Welcome To The Neighbourhood are trademarks of LRR Technologies (Hyderabad) Pvt Ltd. The textual, graphic, audio and audiovisual material in this site is protected by copyright law. You may not copy, distribute, or use this material except as necessary for your personal, non-commercial use. Any trademarks are the properties of their respective owners. More on Hyderabad, India. Jobs in Hyderabad.