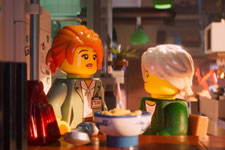 T J Reddy / fullhyd.com
EDITOR RATING
4.5
Performances
Script
Music/Soundtrack
Visuals
7.0
4.0
3.0
6.0
Suggestions
Can watch again
No
Good for kids
Yes
Good for dates
No
Wait for OTT
Yes
Right, so this weekend I'm reviewing three films. The first one is a remake and the last one is a sequel to a film that saw the light of day in 1982. The one in the middle is a spin-off from the inexplicable LEGO cinematic universe. These are the times that the one snooty friend of yours who mocks you for watching films (the derivative entertainment medium of the proletarians) while reading high literature gets a few chips stacked in his/her favour.

Before we get into the meat of the matter here, let's outline what we have going in terms of plot and characters. A random white kid walks into a store filled with artefacts which are curated by JACKIE CHAN!

Okay, this movie earned a brownie point just for letting me look at Jackie Chan's salt-of-the-earth smile again. I mean, how could anyone not like him? No reasons. I thought so.

Here, the kid expresses his detachment with the world by equating himself to a broken LEGO piece. Mr Liu fixes the boy's LEGO man and narrates an old wives' tales written by a group of eight, directed by a trio, produced by six and edited by a five-some. This orgy of ideas, critiques and no focus leads to the story of one Lloyd Garmadon (Dave Franco), son of evil Lord Garmadon. Evil Lord Garmadon (Justin Theroux) wants to destroy the city of Ninjago for some unspecified reason whereas Lloyd and his group of Planeteer-inspired ninjas (remember Captain Planet?) with the aid of their Master Wu (Jackie Chan Role Deux) make it their life's work to stop Lloyd's dad who strangely resembles Aku from Samurai Jack.

While dissecting this movie and its plot, I'd like to direct your attention to the myriad of pop culture references I've used and deliberately avoided while describing the movie's basic plot thread (note the derivativeness) as I want the folk who dare watch this film have a unique experience of their own which is no ruined by a pop-culture savvy show-off like moi. That being said, this film stumbles out of the starting gate as its galloping legs are immobilised by two nunchuk shots it can't recover from.

The first hit comes in the form of the film being a part of this self-deprecating cinematic universe. While the original Lego Movie and to a lesser extent The Lego Batman Movie had a sea of built-up history and purity of intent to work with to create their jokes, worlds and characters, this film suffers from being a wholly recent property that many a person has little to no bond with. There are no Batmen or Supermen or Saurons or Voldemorts. What we are left with are a bunch of interchangeable supporting characters and a plot which that can be classified as an abominable fusion of Star Wars and Kung Fu Panda.

As the movie rubs its shins and tries to play through the pain, a swift second shot immobilises it completely. The Lego Universe works by endlessly poking holes at overused movie clichés and tropes. Think of it as a film written by the good people at Cinemasins or Honest Trailers. For this to work, the nit-picking needs to be on point while also having a wholly original take on an age-old story. The movie has neither. The jokes come off as clunky rehashes of the first film without any of Lord's or Miller's creative sparkle, and the conflicts presented lack any semblance of depth.

While my taking a kids' movie animated by Lego blocks so seriously seems a tad insensitive, I'd like to point out that the first film had clarity of narration with its real life and animated conflicts aligning perfectly onto each other like a couple of Lego pieces clicking into place. This movie, while being a good distraction to the tiny tots of the world, rarely tries to use the world it has created for itself to any level of effect.

Stepping away from those paragraphs of analytics, the movie does have a stellar voice cast to bolster its sagging narration. Justin Theroux doing his best Will Arnett impression is combined with the rapidly rising Dave Franco. They deliver belting lines to make their undercooked conflicts of not being able to catch and throw while inexplicably being able to build mechs seem more epic. The interchangeable supporting cast serve their purpose well while Jackie Chan is back doing his brand of self-referential comedy again, and each moment of him trolling his students by offering up a series of red herrings and overly vague life lessons is reminiscent of the martial arts masters of yore.

The animation bringing these characters to life, while not overly inventive, is passable at best. Gone are the days of endless sight gags, and even if the world is rendered better than in the previous iterations, it lacks a sense of wonder and unpredictability that the previous movies of this series had on offer.

The film has one of the most forgettable scores of any big budget film I've seen in a while. A random series of "eastern"-inspired sounds masquerades as the score so much so that I was expecting some character to start humming Om for good measure just to fill out all avenues of Asia.

And therein lies the problem with The Lego Ninjago Movie. While The Lego Movie and The Lego Batman Movie cannibalised the film industry they were a part of to make their properties entertaining, The Lego Ninjago Movie needed to go the Tarantino route and learn to take inspiration from the brand of hokey Eastern cinema it is trying to ape. Reviewing largely unfunny comedies is a task for both the reviewer and the reader as both are trying to understand why a film failed at its primary goal of being a light-hearted romp.

Simply put, The Lego Ninjago Movie is derivative of its predecessors and is not a whole new avenue of filmmaking. Need proof? We have a laser pointer instead of super glue, the moral stand point of the power being within you and the extremely uninventive name of Ninjago which is unsurprisingly the catchphrase of its characters - Ninja Go! A Vanilla Ice cameo with him singing Go Ninja Go Ninja Go might have put a wider smile on my face and added to this film's enjoyability, but as it stands, the comical overuse of the Wilhelm scream and a few well-placed zingers are the only things I found chuckle-worthy in this one.
Share. Save. Connect.
Tweet
THE LEGO NINJAGO MOVIE SNAPSHOT 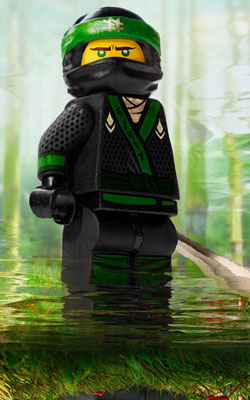 See The Lego Ninjago Movie full details
THE LEGO NINJAGO MOVIE USER REVIEWS
1 - 1 OF 1 COMMENTS
POSITIVE  |  NEGATIVE |  NEWEST  |  OLDEST  |  MOST HELPFUL  |  LEAST HELPFUL
The Common Movie Goer on 8th Oct 2017, 2:46am | Permalink
+1 for the Aku reference. +1 for the CinemaSins and the Honest Trailers reference. Is this your longest review yet, TJ?

P. S. Saw blade runner yesterday. Brilliant visuals and attempts to ask some deep philosophical questions. It keeps to you engaged because if them, but the film is very boring overall and has no plot going for it. Go in with minimal expectations and you might walk out not feeling disappointed.

Battle of the sexes on the other hand, was good fun and had a lot of humor in it. Definitely would recommend it over Boring Bystander 2049. Eager to read what you think.
TJ Reddy on 8th Oct 2017, 7:28am | Permalink
My longest review ever is probably Chef. Glad you enjoyed this one mate, And I'm quite sure we cordially disagree on Blade Runner 2049.
The Common Movie Goer on 8th Oct 2017, 8:48am | Permalink
I figured. Obviously, I am the odd man out (89% on Rotten Tomatoes). Just thought asking you to go in with low expectations would improve the experience for you, but it looks like you didn't need it in the first place. I was expecting Sicario and Arrival levels, still trying to figure out what didn't click for me. I was definitely engaged and wanted to know what's going to happen next, but there was only one "aha" moment. I expected it to be a slow burn, but I guess I didn't know what to make of my experience in the end. I hope Josh shares his opinion of the movie as well.
TJ Reddy on 8th Oct 2017, 9:32am | Permalink
I had many such moments throughout the film TCMG. My favorites were
that moment K sees the gigantic hologram ad of Joi and what that implies
the fact that his purpose is told to him by the underground dwelling Nexus 8s which makes his search for humanity all the more warped as he is still being infused with thoughts instead of coming up with them
Racheal being recreated and all that it implies
Luv and K's dichotomy of urging to be special while being at varying sides on the humanity spectrum
Joi's whole purpose as a character and so much more.
My review has been written and sent with no spoilers but if I were to go into it, I could write another 1000 words on some of the moments of sheer genius in this film.

ADVERTISEMENT
This page was tagged for
The Lego Ninjago Movie english movie
The Lego Ninjago Movie reviews
release date
Dave Franco, Justin Theroux
theatres list
Follow @fullhyderabad
Follow fullhyd.com on
About Hyderabad
The Hyderabad Community
Improve fullhyd.com
More
Our Other Local Guides
Our other sites
© Copyright 1999-2009 LRR Technologies (Hyderabad), Pvt Ltd. All rights reserved. fullhyd, fullhyderabad, Welcome To The Neighbourhood are trademarks of LRR Technologies (Hyderabad) Pvt Ltd. The textual, graphic, audio and audiovisual material in this site is protected by copyright law. You may not copy, distribute, or use this material except as necessary for your personal, non-commercial use. Any trademarks are the properties of their respective owners. More on Hyderabad, India. Jobs in Hyderabad.