The Curse Of The Weeping Woman Review 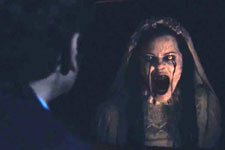 Punarvasu Pendse / fullhyd.com
EDITOR RATING
5.0
Performances
Script
Music/Soundtrack
Visuals
6.0
4.0
6.0
5.0
Suggestions
Can watch again
No
Good for kids
No
Good for dates
Yes
Wait for OTT
Yes
Many a disobedient child has been scared into behaving by vexed parents using the legends of mythical creatures who whisk children away. Like that of the bogeyman in Anglophone countries or of Baba Yaga (and her equivalents) in Russia, the Mexicans tell the tale of La Llorona or the Weeping Woman who is on the lookout for children.

Director Michael Chaves delves into this piece of Mexican folklore and weaves its darker, more macabre origin story into James Wan's established Conjuring universe. Wan himself is one of the producers, and plenty of tricks from his playbook are seen in The Curse Of The Weeping Woman (titled The Curse Of La Llorona in the United States).

The legend of La Llorona is that of a beautiful young woman married to a gentleman who was passing through her village. She found her husband with another woman, and in a fit of blind rage murdered her own children, who were her only remaining link with her husband, by drowning them in the river. Realising what she had done, she committed suicide, and was doomed to search eternally for her children.

Anna Tate-Garcia (Linda Cardellini), a Child Protective Services social worker, draws the wrath of La Llorona on her family when she unknowingly tries to help the children of a woman who show signs of abuse. The family of three has to enter a game of cat and mouse with a dark spirit, with nothing but the tricks of a faith healer called Rafael Olvera (Raymond Cruz) to aid them.

The story is virtually non-existent. The Curse Of The Weeping Woman is pretty much all about Anna trying to outdo the ghost. The movie has a rather tacked-on connection to the Conjuring universe, with the appearance of a certain priest mentioning the titular doll in the Annabelle movies.

The James Wan brand is very evident, though - flashing lights, dark corridors, reflections in mirrors, eerie sounds, dripping water and more such horror tropes are used liberally. Which is a pity, frankly, since the movie showed potential due to the mood it set for the entirety of the first half - that of unsettling and permeating horror - before it gave way to the gung-ho use of flashy, cheap jump-scares.

Linda Cardellini who plays the single mother whose family is plagued by the weeping woman has precious little to do but scream, yet somehow does manage to make the audience feel sympathy for her predicament. Raymond Cruz is fantastic as the disillusioned priest turned "curandero" (faith-healer or shaman) - with his deadpan delivery of one-liners that are a nice contrast to the rest of the movie, and his steely demeanour in front of the ghost that seems like his character doesn't care (come to think of it, he does end up having to be more worried about of people than ghosts). The children, played by Jaynee-Lynne Kinchen and Roman Christou, do what is demanded, which is basically just looking scared for the most part. Marisol Ramirez looks more tired than menacing as La Llorona, with layers of makeup that she ruins as she weeps.

The music is the key to building the atmosphere for a horror movie, and Joseph Bishara does a decent job of complementing the unnerving atmosphere with equally creepy music. Our only issue with the score is that it sometimes potentially alerts you to a jump scare before it actually happens.

If you enjoyed the Conjuring formula, The Curse Of The Weeping Woman is a lighter take which can be fun, as evidenced by the people in the theatre where we went - laughing and generally having a merry time. If you are, however, looking for a horror film that makes you uneasy and keeps you on your toes the whole time, this is not it.
Share. Save. Connect.
Tweet
THE CURSE OF THE... SNAPSHOT
THE CURSE OF THE WEEPING WOMAN SNAPSHOT 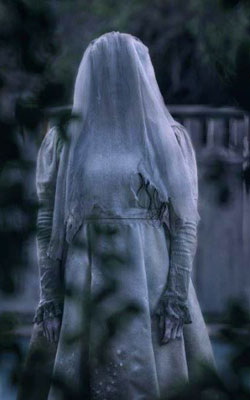 ADVERTISEMENT
This page was tagged for
the curse of the weeping woman english movie review
watch movie the curse of weeping woman online
The Curse Of The Weeping Woman english movie
The Curse Of The Weeping Woman reviews
release date
Follow @fullhyderabad
Follow fullhyd.com on
About Hyderabad
The Hyderabad Community
Improve fullhyd.com
More
Our Other Local Guides
Our other sites
© Copyright 1999-2009 LRR Technologies (Hyderabad), Pvt Ltd. All rights reserved. fullhyd, fullhyderabad, Welcome To The Neighbourhood are trademarks of LRR Technologies (Hyderabad) Pvt Ltd. The textual, graphic, audio and audiovisual material in this site is protected by copyright law. You may not copy, distribute, or use this material except as necessary for your personal, non-commercial use. Any trademarks are the properties of their respective owners. More on Hyderabad, India. Jobs in Hyderabad.