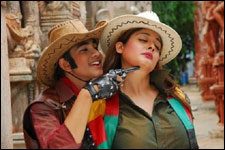 Deepa Garimella / fullhyd.com
EDITOR RATING
1.0
Performances
Script
Music/Soundtrack
Visuals
3.0
1.0
4.0
3.0
Suggestions
Can watch again
No
Good for kids
No
Good for dates
No
Wait for OTT
No
Like most movies of its IQ band, High School is a flick to be endured from a safe distance - preferably, 10 light years. As for the High Court ordering a stay on its screening on grounds of obscenity, it's nothing more than a publicity stunt - there's more titillation in 10 minutes of Sadhyam than in 2 hours of High School.

The story begins with a woman called Saraswathi (Kiran Rathod) testifying in a court hearing because she's willingly languishing in jail for a murder she did not commit. Then, while this part of the story gets discarded like a gutkha wrapper thrown into a spittoon, we have the flashback building up the much-touted elder-woman-young-boy romance.

Bablu is a gawky buck-toothed bespectacled adolescent with only one thing on his mind - his neighbour Saraswathi aka Saru, a lonely software engineer who eats breakfast with a towel wrapped around herself. Bablu spends all his free time peering into her home with a telescope. His friends apparently all have girlfriends, and he swears to them he'll get one, too.

Now Saru has a boyfriend Rohit, who in turn has a very mean father. The old man, when interviewing her, discovers that she's an orphan and lives alone, and asks her how many men she has slept with and how many abortions she has had so far. Livid at the insult, she breaks up with Rohit. Bablu enters her life and makes friends with her, filling the void in her lonesome existence.

The next thing we know is that the boy has an image makeover and starts wooing her big time, even after getting slapped by her. Though the audience's appetite for some real steam has been whetted to scary proportions now, nothing happens to their "love story". Saru and Bablu's parents all try to convince him to forget these evil thoughts and study and get a good job and settle down in life, while all Bablu can think of is marrying the lady.

One day when Rohit and Saru are fighting, Bablu hits him on the head, killing him. Saru takes the blame for the crime and lands in jail, while Bablu swears to make up for this mammoth favour. He then studies to become a lawyer, fights for her release from jail, and enters jail himself. In the end they both walk into the sunset together.

High School is not content with being an awe-inspiringly shoddy movie, and proceeds to enlighten audiences with several moral science lessons. Apart from the pretty obvious message of undying love, High School also preaches about how parents neglect their children thereby leading to disastrous hobbies for kids as they grow up. Then, there's also some sermonizing about the strong independent woman. Unfortunately, all of this is dispensed with the intellectual capacity of a broken fingernail.

Kiran Rathod and her body language show great promise of smut, but apart from one scene where she takes her pallu off, the censors seem have chopped out quite a lot. Her acting skills and the lousy lip-sync compete with one another to bring every scene of hers down. The kid has acted pretty decently, but we wonder which school he goes to. Gundu Hanumantha Rao and a few character actors are clearly in this for money, and that hurts.

Not wanting to do a wholesomely slipshod job, the makers have managed some innovation in the music department, with 3 retro-themed songs.

Watch High School only if you've attended classes on how to check if you're still alive at the end of 2 hours.
Share. Save. Connect.
Tweet
HIGH SCHOOL SNAPSHOT

ADVERTISEMENT
This page was tagged for
High School telugu movie story
kiran rathod highschool movie Wikipedia
kiran rathod high school hindi dubbed movie Wikimedia
high school 2 telugu movie review
Kiran Rathod High School script
Follow @fullhyderabad
Follow fullhyd.com on
About Hyderabad
The Hyderabad Community
Improve fullhyd.com
More
Our Other Local Guides
Our other sites
© Copyright 1999-2009 LRR Technologies (Hyderabad), Pvt Ltd. All rights reserved. fullhyd, fullhyderabad, Welcome To The Neighbourhood are trademarks of LRR Technologies (Hyderabad) Pvt Ltd. The textual, graphic, audio and audiovisual material in this site is protected by copyright law. You may not copy, distribute, or use this material except as necessary for your personal, non-commercial use. Any trademarks are the properties of their respective owners. More on Hyderabad, India. Jobs in Hyderabad.