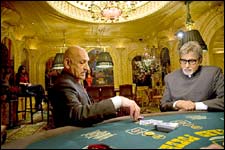 Deepa Garimella / fullhyd.com
EDITOR RATING
3.0
Performances
Script
Music/Soundtrack
Visuals
8.0
3.0
4.0
5.0
Suggestions
Can watch again
No
Good for kids
No
Good for dates
Yes
Wait to rent it
Yes
Other than re-affirming the fact that Amitach Bachchan keeps getting better and better by the day, Teen Patti is an impenetrable haze of vague events reluctantly culminating in an ending so unsure of itself you want to go give it a pep talk. And the obscureness has absolutely nothing to do with the fact that the premise of the film is a mixture of math and gambling.

Teen Patti starts off with a promise of thrill. Venkat Subrahmaniam (Amitabh Bachchan) was a math professor at Bombay Institute Of Technology, where he was popular with his students thanks to his practical methods of teaching. His research projects, on the other hand, kept getting trashed as obscure theory, by an exceptionally rude Head Of The Department.

He makes a breakthrough in Probability Theory, when he starts predicting the winners of an online game of Teen Patti. Excited - mildly put, going by Bachchan's demeanor - Venkat proceeds to involve another professor, Shantanu (Madhavan), and a few students, in the trial.

All around there's astonishment at the finding, and Shantanu and the students excitedly propose to extrapolate the experiment to the real gambling world, and then present it as a research finding bound to take the mathematical world by shock. Venkat is reluctant, and his worst fears come true when the group faces some boors and other rough types in the first den they visit.

They go back yet again when the students - tempted by the wicked amount of money they could make off this - demand that they must not give up, and the problems they face go higher up in intensity. Venkat is adamant to pull out of the dreaded exercise, until an anonymous caller starts blackmailing him for the money.

You can't expect a filmmaker to dole out math lessons to an audience who's come to watch a thriller, but you certainly want to know what the excitement is about when Venkat's discovery is being raved about. However, never are you involved in whatever it was that Venkat discovered, nor is there a clever strategy on display while they're testing the whole algorithm.

Both intellect and intrigue go for a toss, because the movie is a collection of little events and conversations taking place at casinos, gambling dens and their campus, and there's no story in place - at least, none that you can't smell from a mile away. To the film's credit, the second half picks up where holding audiences' interest levels is concerned, but travels an unfortunate further distance down when it delivers a rather shoddy climax and ending.

Less mumbling around and stronger dialogues may yet have helped the flick, but most of the time, the dialogues are comprehensible only to someone who's focusing very hard indeed.

While all the performances are good, including that of Madhavan, it is Amitabh Bachchan who actually holds your attention. In all probability he's the only one your eyes are on in every scene, and as always, worth the instinctive attention. Ben Kingsley plays a magician who Venkat is narrating his story to, and he's interesting to watch. The bunch of guest appearances in the flick -Shakti Kapoor, Jackie Shroff and Ajay Devgan, to name a few - are about as exciting as the magazines in your dentist's waiting room.

There are only 2 or 3 songs in the flick, and except for Neeyat Kharab Hai there's nothing much to the music. The visuals, too, aren't anything to rave about - the film has been shot in casinos and indoor locations, and though contemporary and slick in technical appeal, rather run-of-the-mill in the creative department.

You could watch Teen Patti for the Big B if you want to, and that is just what the makers counted on.
Share. Save. Connect.
Tweet
TEEN PATTI SNAPSHOT

ADVERTISEMENT
This page was tagged for
Teen Patti hindi movie
Teen Patti reviews
release date
Amitabh Bachchan, Madhavan
theatres list
Follow @fullhyderabad
Follow fullhyd.com on
About Hyderabad
The Hyderabad Community
Improve fullhyd.com
More
Our Other Local Guides
Our other sites
© Copyright 1999-2009 LRR Technologies (Hyderabad), Pvt Ltd. All rights reserved. fullhyd, fullhyderabad, Welcome To The Neighbourhood are trademarks of LRR Technologies (Hyderabad) Pvt Ltd. The textual, graphic, audio and audiovisual material in this site is protected by copyright law. You may not copy, distribute, or use this material except as necessary for your personal, non-commercial use. Any trademarks are the properties of their respective owners. More on Hyderabad, India. Jobs in Hyderabad.