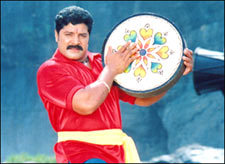 Moving on to the story, the mighty Dasanna (Srihari) is a loyal servant of the aged zamindar (the late Raghuvaran) of a village, and doesn't know that he is in fact a villain. One day, the zamindar sees the shapely Malli (Meena) in a village fair, and tells his attendants that he wants to sleep with her. Unfortunately, no one tells him he's not "Sexagenarian" in that sense. They say that since she's from a reputed family, he must marry her first.

Next up is a plan hatched - by the zamindar as well as her own folks - to get her to marry the zamindar, while making her think all the while that she's being hitched to Dasanna. Dasanna knows none of this, of course - he simply thinks his master is getting married, and makes sure that everything goes on smoothly. Malli comes to know the truth after the wedding, and is thoroughly shocked. She writes to her brother (Suman) who is in Dubai, and who comes back to fight the injustice but is clobbered to death.

The movie ends with Dasanna ultimately carrying the heroine out to safety, kicking 50 goons (while he's carrying her), jumping off a waterfall (while he's still carrying her), and finally, telling his master that he will marry her (while the theatre owners are carrying us).

Meena is a brilliant actress and is the only one who puts in a sincere performance, but this film was clearly a bad idea for her career. Srihari isn't around for a lot of the time in this flick, but does a decent job. The others could have done a decent job, too - by staying out of the movie. Posani pitches in for some intellectually stimulating satire, but ends up with a pile of sludge.

M M Sreelekha's music is quite good in parts, but won't make a difference to the fortunes of the film. And though the film seems to have been quite professionally made, the dated look doesn't manage to open any eyelids.

In sum, here's a movie that you should avoid till it hurts.
Share. Save. Connect.
Tweet
DASANNA SNAPSHOT

See Dasanna full details
DASANNA USER REVIEWS
1 - 1 OF 1 COMMENTS
POSITIVE  |  NEGATIVE |  NEWEST  |  OLDEST  |  MOST HELPFUL  |  LEAST HELPFUL
USER RATING
1.0
1 USER
Performances
Script
Music/Soundtrack
Visuals
2.0
1.0
2.0
1.0
Can watch again - Yes
Good for kids - Yes
Good for dates - Unsure
Wait for OTT - Yes
KrisRay on 19th Mar 2010, 6:50pm | Permalink
I knew it... Deepa, that I'll have a very good laugh here. That's the reason why even before reading the review for Yemaya Chesave, I came here to read this.
>>we mean the family that'll sentimentally disown you after you tell them you watched this flick
LOL... nice one.
>>By comedy, of course, we mean the stunts, the dialogues, the twists and the climax.
So... this is going to grab the 'best comedy film' at Nandi awards... right. and will eventually give more reason to laugh at Nandis, as we do every year.
Good one. keep it up.


Pros: Comedy... all the twists, dialogues, & climax... what else?
Cons: Titles - the only serious part in this comedy

ADVERTISEMENT
This page was tagged for
Dasanna telugu movie
Dasanna reviews
release date
Srihari, Meena
theatres list
Follow @fullhyderabad
Follow fullhyd.com on
About Hyderabad
The Hyderabad Community
Improve fullhyd.com
More
Our Other Local Guides
Our other sites
© Copyright 1999-2009 LRR Technologies (Hyderabad), Pvt Ltd. All rights reserved. fullhyd, fullhyderabad, Welcome To The Neighbourhood are trademarks of LRR Technologies (Hyderabad) Pvt Ltd. The textual, graphic, audio and audiovisual material in this site is protected by copyright law. You may not copy, distribute, or use this material except as necessary for your personal, non-commercial use. Any trademarks are the properties of their respective owners. More on Hyderabad, India. Jobs in Hyderabad.