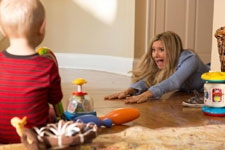 Nupur Barua / fullhyd.com
EDITOR RATING
4.0
Performances
Script
Music/Soundtrack
Visuals
5.0
3.0
4.0
5.0
Suggestions
Can watch again
No
Good for kids
No
Good for dates
Yes
Wait to rent it
No
Film critic Dwight Macdonald famously said, "Parody is making new wine that tastes like the old but has a slightly lethal effect." In its latest offering, the makers of the Scary Movie franchise have managed to concoct a foul-tasting cocktail, just because they can, and serve it to an already-satiated audience, expecting accolades. Scary Movie 5 is an offence to the most spoof-hardened zealot, and the absence of regulars Anna Faris and Regina Hall does not help matters much.

As with earlier films, Scary Movie 5 begins with a spoof on a horror film - this time, Paranormal Activity. What is scarier, though, is that Charlie Sheen and Lindsay Lohan play live-in lovers in this version (actually, that is a horror movie in itself, enhanced by the fact that they play themselves). Lindsay is possessed, and kills Charlie. Charlie's three kids disappear.

The rather sporting Snoop Dogg and Mac Miller, also playing themselves, find the missing children in a cabin in the woods (reference - The Cabin In the Woods) while the duo are looking for cannabis plants. They collect the reward for the now feral children, and hand them over to the authorities, who eventually hand them over to Charlie's brother Dan (Simon Rex) and his wife Jody (Ashley Tisdale).

Jody tries to bond with her new wards, and to impress them with her latest career move - a lead role in a ballet performance (reference - Black Swan).

Life is not that simple, however. Strange occurrences in the house make Dan and Jody almost lose their minds. Then they realise that (in Mama style) the children's mother is trying to rid herself of a curse and, therefore, attacking the house. In the meantime, Dan has enough on his plate as a scientist at the primate research facility (reference - Rise Of The Planet Of The Apes).

As the new family goes through (in alphabetical order) Evil Dead, Fifty Shades Of Grey, Inception, Insidious and Sinister, the villainous Mama is finally defeated, but the twist comes after the credits roll, if you are still around to watch it.

The movie is actually a series of little skits, and after the first 10 minutes or so, you realise that you are going to be subjected to agonising farces and slapstick with no definite plot. On the brighter side, some of the gags are funny enough to make you want to discuss them later, but most of them border on the obscene and unnecessary.

The repeated name-dropping, apparently used as a device to garner giggles, becomes the most irritating aspect of the film. Most of the story revolves around the evil Mama, which may irk some fans.

Surprisingly, the comic relief comes not from the actors, but from the cameo roles, especially Snoop Dogg and Charlie Sheen. They seem sporting enough to parody themselves, but this also proves that they have nothing better to do. Also, wasn't Lindsay Lohan supposed to be in jail?

The music and the production design are nothing to write home about, but avid film buffs will recognise the movies they are inspired from. Imitation, in this case, is not the best form of flattery, though.

Watch only if you are a Scary Movie fan, and if you think the second instalment of the franchise was the worst ever. This one may make you change your mind. A better alternative would be to watch Bol Bachchan again - the desi slapstick humour is more relevant to the Indian audience.
Share. Save. Connect.
Tweet
SCARY MOVIE 5 SNAPSHOT 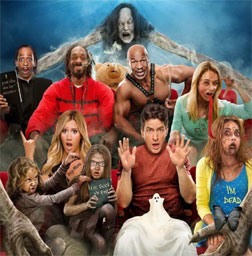 ADVERTISEMENT
This page was tagged for
Scary Movie 5 english movie
Scary Movie 5 reviews
release date
Charlie Sheen, Lindsay Lohan
theatres list
Follow @fullhyderabad
Follow fullhyd.com on
About Hyderabad
The Hyderabad Community
Improve fullhyd.com
More
Our Other Local Guides
Our other sites
© Copyright 1999-2009 LRR Technologies (Hyderabad), Pvt Ltd. All rights reserved. fullhyd, fullhyderabad, Welcome To The Neighbourhood are trademarks of LRR Technologies (Hyderabad) Pvt Ltd. The textual, graphic, audio and audiovisual material in this site is protected by copyright law. You may not copy, distribute, or use this material except as necessary for your personal, non-commercial use. Any trademarks are the properties of their respective owners. More on Hyderabad, India. Jobs in Hyderabad.