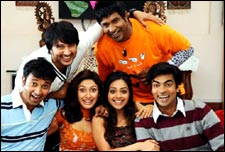 Deepa Garimella / fullhyd.com
EDITOR RATING
3.0
Performances
Script
Music/Soundtrack
Visuals
6.5
2.5
5.5
6.5
Suggestions
Can watch again
No
Good for kids
Yes
Good for dates
Yes
Wait to rent it
Yes
Inkosari is an attempt to deliver a "different" product, and features some good performances and fairly bright music. Sadly, all it ends up as is a sorry picture of wasted potential. Not just because of it being based on a simplistic high-school fantasy, but because it is just how a rookie attempt to convert a simplistic high-school fantasy into a full-fledged movie would turn out to be.

The film opens with an intimate pack of friends in college. On their last day together they vow to keep in touch forever and meet every year at a mutually agreed place. Dissenting voices that point out that things are bound to change even one year from the present are frowned upon, and the gang parts ways with the warm buddy-buddy treaty of staying in touch no matter what.

Priorities naturally change drastically, and no one shows up one year later. 7 years hence, Ajay (Raja) rounds up his friends, who're now well-ensconced in their own lives - lives that the film firmly wants you to believe are miserable.

Bala (Vennela Kishore) is the crown comic of the gang, whose wife has just walked out on him. Sudhakar (Ravi) is trapped in his rich businessman father's shadow, Vicky (Sandeep) is the slogger and office-nobody, Deepti (Richa) is married to a workaholic husband, and Shruti (Manjari Phadnis) is engaged to a weirdo. The rest of the story is about how the 7 days together make up for some much-needed emotional release for all of them.

That there was an effort to stay away from the beaten track is quite obvious from the word go. The basic concept of Inkosari is quite refreshing, and the mood of the film is light all through, helped by the ample sprinkling of cheerful banter right till the end. In several places, the dialogues are a transplant from real-life canteen chit chat.

Unfortunately, there is no directorial genius here, and this makes the film fall flat on its face. It is slow, there's a certain lack of cohesiveness that comes across throughout, and amateurishly handled scenes lead to several awkward gaps all over - even between different dialogues within a single scene.

While Raja is the anchor of the flick and puts in a spontaneous performance, it is Manjari Phadnis who brings out the anguish of why there was not a better helmsman sculpting the film and making use of the acting skills on display. She and Raja end up having a clumsy romantic track together. Raja himself is a victim of sporadic, weak success, and despite the energy he exudes, Inkosari is hardly going to bring out the champagne.

Richa looks ravishing, but there's not much she's given to do. The other faces - Vennela Kishore, Ravi and Sandeep, in particular - look earnest, too, and in need of a good film. Gollapudi and Rao Ramesh appear in uninteresting bit roles.

Some peppy numbers keep with the "friendship" frame of mind, but will hardly top the charts. The rest of the soundtrack is quite bland, and rhere's some terrible lip-sync wherever the women are involved.

As for the visuals, it's a pretty low-budget film. There's been some emphasis on de-emphasizing the background - with sparse but modern indoor settings - and keeping to the characters. There are some pretty shots of the Vizag beaches, though.

Some of the sequences show creative ambition - for example the long beach conversation between Bala and Sudhakar seems to have been shot in one go - but the overall effort looks quite amateurish.

It's barely recommended for an inkosari watch, but go aiming strictly to enjoy yourself, and you'll find that one watch of Inkosari doesn't really drag you down if you go with low expectations.
Share. Save. Connect.
Tweet
INKOSARI SNAPSHOT

See Inkosari full details
INKOSARI USER REVIEWS
1 - 2 OF 2 COMMENTS
POSITIVE  |  NEGATIVE |  NEWEST  |  OLDEST  |  MOST HELPFUL  |  LEAST HELPFUL
USER RATING
7.0
3 USERS
Performances
Script
Music/Soundtrack
Visuals
8.0
6.7
7.0
7.0
Can watch again - Unsure
Good for kids - Yes
Good for dates - Unsure
Wait to rent it - No
ravi2010 on 10th Mar 2010, 11:29am | Permalink
A great clean comedy that can be watched by the entire family. It was a refreshing change from some of the other run of the mill films. I recommend watching the film for some good laughs. After seeing the movie I did feel that the critics have been unfair to it.

chandra on 1st Mar 2010, 2:06pm | Permalink
copy of rock on story with some stupid comedy.
direction looks pathetic though writer tried to create something

ADVERTISEMENT
This page was tagged for
Inkosari telugu movie
Inkosari reviews
release date
Raja, Manjari Phadnis
theatres list
Follow @fullhyderabad
Follow fullhyd.com on
About Hyderabad
The Hyderabad Community
Improve fullhyd.com
More
Our Other Local Guides
Our other sites
© Copyright 1999-2009 LRR Technologies (Hyderabad), Pvt Ltd. All rights reserved. fullhyd, fullhyderabad, Welcome To The Neighbourhood are trademarks of LRR Technologies (Hyderabad) Pvt Ltd. The textual, graphic, audio and audiovisual material in this site is protected by copyright law. You may not copy, distribute, or use this material except as necessary for your personal, non-commercial use. Any trademarks are the properties of their respective owners. More on Hyderabad, India. Jobs in Hyderabad.