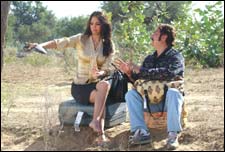 Nupur Barua / fullhyd.com
EDITOR RATING
3.0
Performances
Script
Music/Soundtrack
Visuals
7.5
5.0
4.0
5.0
Suggestions
Can watch again
No
Good for kids
Yes
Good for dates
Yes
Wait to rent it
Yes
Challo Dilli has been in the news for a while now. There was much hype surrounding Lara Duttaâ€™s debut as a producer - her production house, named Bheegi Basanti Entertainment, joined hands with Mahesh Bhupatiâ€™s production house, Big Daddy Productions, to produce this movie. It is not an easy business to run, but Lara took the risk. Was it worth it?

There are a number of reasons that will draw crowds to this movie, at least during the opening weekend. Curiosity, for one - the unusual pairing of the two leads, Vinay Pathak and Lara Dutta. Then, there is Vinay Pathak himself. And then you learn that it is a road movie, and we all know how Jab We Met was received.

Mihika Banerjee (Lara Dutta) is a snooty, prim and proper investment banker, who misses her flight from Mumbai to Delhi (where her husband lives), and finds herself stranded in Jaipur. She somehow ends up travelling with a Karol Bagh resident, Manu Gupta (Vinay Pathak), the man who is involuntarily responsible for her predicament.

Both of them need to reach Delhi as soon as possible. True to character, Mihika has a problem with the kind of car she has to travel in, the calories in the food at a roadside dhaba, the wild animals so close to where she has to spend a night, and just about everything else.

Manu, true to his character, is unfazed by all these factors, and more. His oft-repeated line in the movie is, roughly translated, 'So whatâ€™s the big deal?â€™.

So far so good. Stellar performances by both actors and the going seems good. Not surprisingly, the shrew will be tamed. Even less surprisingly, she will be exposed to the 'otherâ€™ India, or at least a version of it. And this is where the movie takes a turn for the worse.

Deprived of her worldly belongings, including a laptop, the high-flying Mihika, who has a problem taking a 'budgetâ€™ airline, seems to forget to throw a fit, in keeping with her character, at the appropriate places. There are times when she looks positively vacant, and then realizes with a jolt that she has to act selfish and cold. The tobacco-chewing, spit-splashing Manu takes it upon himself to keep her entertained by not reacting to his co-passenger.

Vinay Pathak does a brilliant job as the goofy man (think Bheja Fry), but the intermission is when the movie should have been over.

Instead, the script, drags and meanders post-interval, and the characters find themselves in situations that seem to be added in just for kicks. Even Manuâ€™s constant supply of hilarious statements and jokes become dull. Of course, what makes the entire movie stand out is the unconventional relationship between the two lead actors. There is no romance, and no possibility of one either.

And, please - 'ruralâ€™ India is not all about thugs, lecherous men, and corrupt cops. The sooner our film industry accepts this, the better. Also, men from Karol Bagh are not always the belching, farting, over-eating type. In fact, the humour seems rather forced at this point. However, the Bengali family in the train was a nice touch, despite the stereotyping.

The music is not great, but there are some nice visuals that enhance some of the songs, despite the dreadlocked boys singing a folksy tune (again, a bit forced). The movie has all the right intentions, with its heart in the right place, but the execution lacks direction. However, 2 things to watch out for - the cameo role of Mihikaâ€™s husband, and the unexpected twist in the climax.

Chalo Dilli is just the beginning of Laraâ€™s career as a producer, and she seems to know what she wants, in terms of content. However, here's hoping for some better stuff soon.
Share. Save. Connect.
Tweet
CHALO DILLI SNAPSHOT

ADVERTISEMENT
This page was tagged for
Chalo Dilli hindi movie
Chalo Dilli reviews
release date
Lara Dutta, Vinay Pathak
theatres list
Follow @fullhyderabad
Follow fullhyd.com on
About Hyderabad
The Hyderabad Community
Improve fullhyd.com
More
Our Other Local Guides
Our other sites
© Copyright 1999-2009 LRR Technologies (Hyderabad), Pvt Ltd. All rights reserved. fullhyd, fullhyderabad, Welcome To The Neighbourhood are trademarks of LRR Technologies (Hyderabad) Pvt Ltd. The textual, graphic, audio and audiovisual material in this site is protected by copyright law. You may not copy, distribute, or use this material except as necessary for your personal, non-commercial use. Any trademarks are the properties of their respective owners. More on Hyderabad, India. Jobs in Hyderabad.