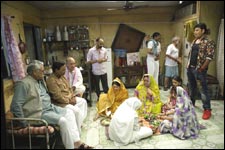 Deepa Garimella / fullhyd.com
EDITOR RATING
1.5
Performances
Script
Music/Soundtrack
Visuals
6.0
3.0
3.0
2.0
Suggestions
Can watch again
No
Good for kids
No
Good for dates
No
Wait for OTT
No
In its presentation at least, Na Ghar Ke Na Ghat Ke is so incongruous that more than annoyance, it evokes pity. The kind of pity that you get not for being Doordarshan, but for being like DD. Couple that with a weak attempt at one of the toughest genres to execute - comedy - and what you get is nothing less than one mighty dose of yawns coming up.

The movie is the tale of Devki (Rahul Aggarwal), a young graduate from a cinematically detailed village setting, who moves to Mumbai to work. Like most such instances that we've seen earlier, he is fascinatingly ignorant of the ways of the big bad city, and steps into quite a few puddles of muck. He moves in with a loafer called Madan (Ravi Kissen).

On his first visit back home, his folks (Neena Gupta, Om Puri) decide he's wasting away. They get him married immediately, to an extremely homely and meek bride Mithilesh (Narayani Shastri). Thanks to religious customs he can't take his wife back to Mumbai, but pretty soon, his parents and his wife land up at his home.

Disgusted with the filth of the city, and mostly with Devki's foul-mouthed roommate, the parents return to their village while Mithilesh offers to stay back. A mess unfolds soon after, what with Mithilesh's exasperating innocence and the high-handed ways of the Mumbai police, and the second half of the film is dedicated to how Devki and almost his entire village run around to get things untangled back to normal.

It is indeed a cute concept to be showing the naÃ¯ve simpleton Devki dealing with a rough city. However, while the situations he lands in are sometimes real, they're not built up well enough to actually evoke laughter. Further, the ludicrous plot twist just before the interval spoils any chances of the film even making it halfway to its finish line.

Then, the movie is slow all through, and amateurish direction makes the humour insipid. There's too little by way of characterization and drama as well, and almost all the lines and jokes fall pretty flat.

Om Puri is in his umpteenth grumpy-man role, Paresh Rawal livens up things a bit, Neena Gupta can't be bad even if she chooses to, and the lead pair (involving, by the way, the debutant director of the movie, Rahul Aggarwal) do their best to stay earnest. In the middle of the blahness of it all, Ravi Kissen does a cringe-worthy Madan to actually pull off the brightest part of the flick.

Incredibly dull cinematography and cheesy graphics make Na Ghar Keâ€¦ stand out for its mediocrity. The music has some interesting bits, and the songs aren't really for the bathroom breaks - they're situational.

ADVERTISEMENT
This page was tagged for
na ghar ke na ghaat ke movie
na gharna ke na ghatna hindi comedy movies
Na Ghar Ke Na Ghaat Ke hindi movie
Na Ghar Ke Na Ghaat Ke reviews
release date
Follow @fullhyderabad
Follow fullhyd.com on
About Hyderabad
The Hyderabad Community
Improve fullhyd.com
More
Our Other Local Guides
Our other sites
© Copyright 1999-2009 LRR Technologies (Hyderabad), Pvt Ltd. All rights reserved. fullhyd, fullhyderabad, Welcome To The Neighbourhood are trademarks of LRR Technologies (Hyderabad) Pvt Ltd. The textual, graphic, audio and audiovisual material in this site is protected by copyright law. You may not copy, distribute, or use this material except as necessary for your personal, non-commercial use. Any trademarks are the properties of their respective owners. More on Hyderabad, India. Jobs in Hyderabad.