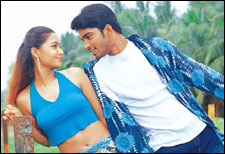 And - this is not easy for us to say - the opening titles of Rambabu Gadi Pellam, the film, have just started rolling.

Then on, the number of times you laugh depends on your faith in the Telugu film comedy industry and what it takes for you to sit through an entire film thinking how funny it is just to have Allari Naresh on screen.

The story is about how Rambabu (Allari Naresh) suppresses his carnal urges throughout life. It's a difficult task, for several reasons. Firstly, at office he's surrounded by a sleazy bunch of much-married colleagues (Venu Madhav, Ali, M S Narayana, Chinna) who poke fun at him because he doesn't take part in their sleazy extra-curricular activities, namely placing orders for women on the weekends.

Secondly, Rambabu is surrounded by nymphomaniacs of quite a few types, including his neighbours and his maradalu Rambabu Gadi Pellam. Thirdly, he's falling in love with a girl (Sonali Joshi) who fell in love with him because he didn't leer at her.

And then, when he gets himself transferred to someplace else to escape his cousin, he falls into the trap of the ultimate nympho of them all â€" the boss' girlfriend (Jyothi), who takes him home on some pretext, seats him outside her bedroom, wraps a towel round her waist, removes her panty and tosses it â€œaccidentallyâ€ in front of him, goes to a bathroom to bathe, and asks him to get her her lingerie that's lying on her bed.

It's a terrible idea to enter the movie if you're a woman or a kid, or even anything else for that matter. However, if you're in the mood for some irresponsible chuckles, Rambabu Gadi Pellam might just entertain you. Quite a few bawdy jokes abound and it's a largely miserably formless script, but some of the humour makes it a couple of notches superior to being downright disastrous, making it worthy of a 2.5 rating overall.

Allari Naresh could even file a sexual harassment case against the makers of this movie. He's done well, though - wearing just one helpless and frustrated expression throughout the movie, which tickles you endlessly. The galaxy of comedians also does a decent job of adding weight to the jokes. And except for Gajala and Sonali Joshi, the other women are black holes of talent.

The flick seems to have been in the cans for at least 5 years, going by the ages of some of the characters. The visuals are shoddy, but the music surprises sometimes, making you wonder how on earth they managed to rope in Hariharan and Chitra for the songs.

You can perhaps watch Rambabu Gadi Pellam, but only if you're sure no one's looking.
Share. Save. Connect.
Tweet
RAMBABU GADI PELLAM SNAPSHOT

See Rambabu Gadi Pellam full details
RAMBABU GADI PELLAM USER REVIEWS
1 - 1 OF 1 COMMENTS
POSITIVE  |  NEGATIVE |  NEWEST  |  OLDEST  |  MOST HELPFUL  |  LEAST HELPFUL
USER RATING
10
1 USER
Performances
Script
Music/Soundtrack
Visuals
10.0
10.0
10.0
10.0
Can watch again - No
Good for kids - No
Good for dates - No
Wait to rent it - No
Aakasa Ramanna on 1st Mar 2010, 8:42am | Permalink
damn ..Just got summoned by the court for giving that rating !!
Damn !!! I got capital punishment for that !!!
But guess you cant kill a man whoz already dead mentally and spiritually after seein a horrific movie on the lines of rambabu gaadi pellam .
BAD BAD BAD MOVIE Which im sure wouldve been a hit bac in the 80s .. Damn now the old age society is summoning me :-(

ADVERTISEMENT
This page was tagged for
jio rockers Rambabu movie
rambabu gadi pellam full movie in Jio rockers
Rambabu gadi pellam telugu full movie moviezwap
Rambabu gadi pellam telugu full movie
rambabu gadi pellam full movie download
Follow @fullhyderabad
Follow fullhyd.com on
About Hyderabad
The Hyderabad Community
Improve fullhyd.com
More
Our Other Local Guides
Our other sites
© Copyright 1999-2009 LRR Technologies (Hyderabad), Pvt Ltd. All rights reserved. fullhyd, fullhyderabad, Welcome To The Neighbourhood are trademarks of LRR Technologies (Hyderabad) Pvt Ltd. The textual, graphic, audio and audiovisual material in this site is protected by copyright law. You may not copy, distribute, or use this material except as necessary for your personal, non-commercial use. Any trademarks are the properties of their respective owners. More on Hyderabad, India. Jobs in Hyderabad.