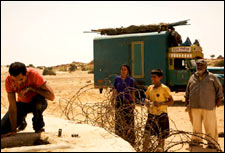 Deepa Garimella / fullhyd.com
EDITOR RATING
2.0
Performances
Script
Music/Soundtrack
Visuals
7.0
4.0
7.0
9.0
Suggestions
Can watch again
No
Good for kids
No
Good for dates
Yes
Wait to rent it
Yes
Road is like a caricature of the quintessential "art movie" - the kind that embarrasses to no end your innermost urges to expect a plot out of a film. There are vague movies and there are rambling movies, but Road quite takes the cake as far as the business of taking artistic license and absconding with it is concerned.

A restless Vishnu (Abhay Deol) sets out on a battered truck to escape the rut of having to take part in his father's hair oil business. The truck is apparently to be sold to a museum across the desert, and while all Vishnu wants to do is be liberated, his father arms him with a bunch of cartons of the foul-smelling hair oil, to be sold during the journey.

On his way he reluctantly picks up a kid (Faizal) working in a roadside tea stall who wants to desperately run away to a better place, and then a miscellaneous vagrant (Satish Kaushik). All the while during his journey across the frighteningly sterile desert, Vishnu grudges company. He tries to shake his co-passengers off, until he slowly realizes he needs their favours as much as they need the ride.

The truck happens to carry an ancient cinema projector and several film reels - the movie never makes it clear whether Vishnu already knew this or not - and the trio start screening movies to little clusters of awe-struck village populace during their stops.

A search for water ominously takes over their frame of reference. They let in a gypsy who offers them a sip, and later, encounter water goons who threaten to take their life. The film ambles on until it reaches what the makers are convinced is a logical end to the whole premise.

Though an expertly shot film, Road is ridiculously slow and pointless. The bareness of the desert and the nothingnesses in the dialogue and screenplay are vexing to sit through, even though this is a film with a run time of less than one-and-a-half-hour.

Indeed, if not for Satish Kaushik's occasional wisecracks, it wouldn't have been half as tolerable as it is currently. On the other extreme, there are touches of the outrageous - one scene that shows Abhay Deol crapping (!!); and towards the end, a long love-making session between Abhay Deol and the heroine.

Every scene looks pregnant, but you don't know with what - for example, the sequences in which the cinema projector entertains the villagers, or the scenes of the mela. The whole set-up reeks of a focus on the "arty" types who love suggestiveness but don't bother that it leads nowhere.

As for the performances, they all deserve accolades, but Satish Kaushik stands out for refreshingly bringing to life his character - and more importantly, the movie. Abhay Deol, the 12-year-old Faizal and the heroine Tannishtha Chatterjee put in a fine effort as well. Faizal is especially fun to have around, for his chirpy presence.

And like we said, it's a brilliantly made film, technically. The starkness and the heat of the desert and the rawness of being of all the 4 protagonists - have all been captured flawlessly. The journey in the truck is real enough for you to even smell the dingy interiors. Some fine classical tunes lace the background, and the soundtrack is innovatively woven into some of the scenes.

Watch it, if you like your movies with a lot of commas, at more places, than are, tolerable, or even grammatically correct, and... plenty of ellipses... where the commas run out... and also... if you don't mind your films not having a full stop
Share. Save. Connect.
Tweet
ROAD MOVIE SNAPSHOT

See Road Movie full details
ROAD MOVIE USER REVIEWS
1 - 2 OF 2 COMMENTS
POSITIVE  |  NEGATIVE |  NEWEST  |  OLDEST  |  MOST HELPFUL  |  LEAST HELPFUL
Aakasa Ramanna on 10th Mar 2010, 7:00am | Permalink
I always thought there were two types of movies .. Movies which were the run of the mill , dreamy , fun types ... and movies which laid emphasis on technical brilliance even at the cost of story telling . Then I saw Balayya babu's movies . Thankfully Road movie does not fall in the 3rd category . But what we see is a movie filled with technical brilliance .. wouldve been better if only it was refilled with more substance :-(
Road movie has that typical europian movie touch to it where the mood of the story is the storyline .We have a story of a hair oil salesman ( who isnt ranbir kapoor , to find his job interestin ) who goes on a journey across the destert to sell his 1930s truck and some hair oil on the move, The story ' predictablly 'deals with the trials and tribulations he faces during the journey of this unforgiving desert .
Like any other 'Art' movie attention in detail is given to build up the mood of the film - which invariably is somber in most of the cases. The performances are top notch . The music - though inspired from babel and motorcycle diaries suits the mood of the film , the crapping scenes were brilliantly taken (:P) but where this movie takes u by awe is the cinematographic brilliance and the art direction (Dont expect glossiness like devdas) . And ya .. the delightful portrayal of the effects of cinema on the mood of people .
All in all ... If you have the patience and the time you might find this movie interesting if your okay with the fact that the story goes tel bechne .

Aamchi on 9th Mar 2010, 12:02pm | Permalink
Definitely not for those who prefer their movies to be run-of-the-mill, predictable fare. Also, those whose sensibilities are pseudo-conservative should steer clear of this work of art. When did appreciating a work of art become pretentious? The only problem I had with the movie, is those occasions where they 'borrowed' the soundtrack form 'Babel', and where the some risque phrases/words have been silenced. Other than that, this is a work of art so sincere, that Benegal's previous works pale in comparison. Here's looking forward to his next one.

ADVERTISEMENT
This page was tagged for
Road Movie hindi movie
Road Movie reviews
release date
Abhay Deol, Satish Kaushik
theatres list
Follow @fullhyderabad
Follow fullhyd.com on
About Hyderabad
The Hyderabad Community
Improve fullhyd.com
More
Our Other Local Guides
Our other sites
© Copyright 1999-2009 LRR Technologies (Hyderabad), Pvt Ltd. All rights reserved. fullhyd, fullhyderabad, Welcome To The Neighbourhood are trademarks of LRR Technologies (Hyderabad) Pvt Ltd. The textual, graphic, audio and audiovisual material in this site is protected by copyright law. You may not copy, distribute, or use this material except as necessary for your personal, non-commercial use. Any trademarks are the properties of their respective owners. More on Hyderabad, India. Jobs in Hyderabad.