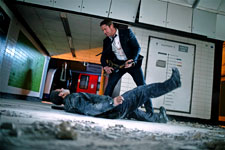 Punarvasu Pendse / fullhyd.com
EDITOR RATING
4.0
Performances
Script
Music/Soundtrack
Visuals
6.0
4.0
4.0
4.0
Suggestions
Can watch again
No
Good for kids
No
Good for dates
No
Wait for OTT
Yes
We were not sure what to make of Angela Has Fallen, honestly, about an hour into the movie. Is it a social commentary on trigger-happy militia enthusiasts? Does it portray a longing for a time when a soft-spoken, erudite man was in office?

Angel Has Fallen is the next film in the Fallen series after the equally gung-ho action movie London Has Fallen. And the apple doesn't fall far from the tree - Angel Has Fallen is every bit as campy as its predecessor. Everything is as absurd, including the over-the-top premise of the movie.

Allan Trumbull (Morgan Freeman) is now the President of the United States, who survives an assasination attempt on a fishing trip despite slipping into a coma. The only other survivor is Secret Service agent (and soon-to-be director) Mike Banning (Gerard Butler), as the drones that kill 18 other agents spare him.

The President's guardian angel has now fallen - Mike is now public enemy number one, and his wife Leah (Piper Perabo) is receiving death threats and media harassment. Mike realises that he is being set up after his escape is facilitated by a planned, armed militia. So off we go, alongside, to see Mike race against time to make sure that the President - the only man who can clear his name - is safe.

The thing about Angel Has Fallen is that director Ric Roman Waugh makes no pretenses about subtlety or nuance. Factors like logic and continuity are secondary to Waugh's vision for this movie - unadulterated, in-your-face action. Generic gunfights and hand-to-hand combat are not an issue, as long as you get to see all of it. Neither is less-than-spectacular CGI, particularly explosions, as long as they are a part of the action.

You could try to argue all sorts of things here - the ridiculously predictable plot, the complete lack of logic from multiple side actors (looking at you, FBI Agent Helen Thompson (Jada Pinkett-Smith)), the complete lack of extra security detail on a President who has just survived an attempt on his life - but they are all moot points here. The movie shows you what it wants to show you, and your brain is told to be as uninvolved as possible.

Gerard Butler is playing the same role for the third time, and the movie demands two expressions from him - angry and pained. He pulls them off, surprising nobody, apart from his primary duty of looking cool in action scenes.

How many times has Morgan Freeman played the role of a President, or a similar authority figure? This role is probably as easy as A-B-C for the veteran actor, and he plays it with a level of non-chalance that borders on being satirical.

Jada Pinkett-Smith seems to be all business, and is almost on the plot before the film decides it is done with her. The rest of the supporting cast is competent, but there are characters that seem to spoil the movie by simply being in it. Furthermore, it always seems like the cast, like the movie itself, is onto an inside joke that the rest of us plebs cannot fathom. 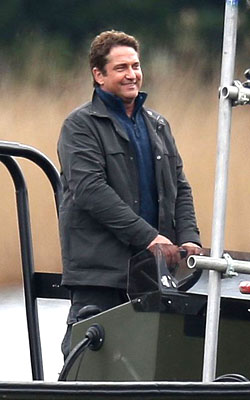 ADVERTISEMENT
This page was tagged for
+review angela has fallen
Angel Has Fallen english movie
Angel Has Fallen reviews
release date
Gerard Butler, Morgan Freeman
Follow @fullhyderabad
Follow fullhyd.com on
About Hyderabad
The Hyderabad Community
Improve fullhyd.com
More
Our Other Local Guides
Our other sites
© Copyright 1999-2009 LRR Technologies (Hyderabad), Pvt Ltd. All rights reserved. fullhyd, fullhyderabad, Welcome To The Neighbourhood are trademarks of LRR Technologies (Hyderabad) Pvt Ltd. The textual, graphic, audio and audiovisual material in this site is protected by copyright law. You may not copy, distribute, or use this material except as necessary for your personal, non-commercial use. Any trademarks are the properties of their respective owners. More on Hyderabad, India. Jobs in Hyderabad.