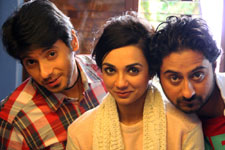 Nupur Barua / fullhyd.com
EDITOR RATING
3.0
Performances
Script
Music/Soundtrack
Visuals
5.0
3.0
5.0
5.0
Suggestions
Can watch again
No
Good for kids
No
Good for dates
No
Wait for OTT
No
A guy should romance a college girl, fool around with the office hottie, flirt with his sister-in-law, but never get serious with anybody but a Delhi girl. Or so the protagonist of the rather misogynist Dilliwaali Zaalim Girlfriend thinks. Directed by Japinder Kaur, the movie is yet another story of a few people from Delhi, and how funny they are in everything they do - from drinking like fish to behaving in the most chauvinistic manner possible.

Dhruv (Divyendu Sharma) wants to be an IAS officer. He shares his living quarters with close friend Happy (Pradhuman Singh). Life does not seem to be moving in the direction they wanted, but that does not stop them from dreaming - about women, mostly. Needless to say, they are also unsuccessful in the romance department, given their lack of wealth and influence.

Then Dhruv meets with Sakshi (Prachi Sharma), who works in the loan department of a bank. Since she shows some interest in him, or so he thinks, Dhruv decides to impress her or die trying. With the help of the equally clueless Happy, Dhruv manages to gather enough to apply for a loan for a car, which he then purchases. And hopes that Sakshi thinks he is cool.

Since it is Delhi, nothing is safe - not even the car. Dhruv discovers that his precious new drive is stolen, and the culprit is none other than the garage owner with a dubious existence, Minocha (Jackie Shroff). The man has the law in his pocket, and there is no way that Dhruv can get his car back by lawful means.

All is not lost, however, since his friend Nimmy (Ira Dubey) is a journalist who has access to all kinds of information and somewhat shifty methods of seeing to justice. Happy, Nimmy and Dhruv join hands to bring down Minocha, as they jump headlong into an adventure that will claim lives and relationships.

The first impression you get of the screenplay is that it has all been done before. This is a con comedy, a genre that most of us are familiar with. If you can't beat 'em, join 'em - this is the mantra that is not only familiar, but also predictable. With some untidy writing and weak plot points, the script pans out slowly into a tedious and not-so-funny movie.

The characters are not people you would want to invest two hours of your life in. Each one, imperfect as they are, comes across as self-involved and unworthy of affection. The interpersonal relationships, friendships and romances are not played out in a convincing manner. The comedy outstays its welcome, and the resolution goes on forever. The plot stretches itself thin with what can only be considered unreal tenacity. The dialogues are monotonous, and the twists in the tale are irritatingly unwanted.

This is not Divyendu Sharma's best. He gets on to your nerves with his smart-yet-innocent act. Pradhuman Singh looks bored. Ira Dubey tries to raise the level of spunkiness in the film, but fails miserably. And Prachi Sharma cannot act.

The surprise element in the movie is Jackie Shroff with his unintentionally funny Punjabi accent. He is so sincere that you almost weep for him. The other actors do their bit, but overall, the cast do not look very interested in the film.

The production and costume designing are pretty lazily put together, or so it seems. Any effort to try and make this world authentic is missing. The movie boasts of more music directors than actors, and that is why the soundtrack, although mostly Punjabi-music-based, seems hollow, and loud. The cinematographer seems equally disinterested. And the editing is loose, and erratic.

Dilliwaali Zaalim Girlfriend, despite its claims, is not a fun movie. It is a mash-up of many other films, from both Bollywood and Hollywood, that you have seen. It is easily avoidable, unless you want to sit through stale jokes again. Avoid it.
Share. Save. Connect.
Tweet
DILLIWAALI ZAALIM GIRLFRIEND SNAPSHOT 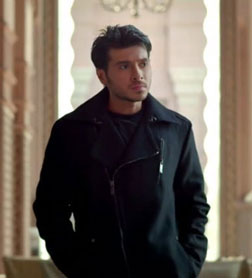 ADVERTISEMENT
This page was tagged for
zaalim girlfriend hindi review
Dilliwaali Zaalim Girlfriend hindi movie
Dilliwaali Zaalim Girlfriend reviews
release date
Divyendu Sharma, Ira Dubey
Follow @fullhyderabad
Follow fullhyd.com on
About Hyderabad
The Hyderabad Community
Improve fullhyd.com
More
Our Other Local Guides
Our other sites
© Copyright 1999-2009 LRR Technologies (Hyderabad), Pvt Ltd. All rights reserved. fullhyd, fullhyderabad, Welcome To The Neighbourhood are trademarks of LRR Technologies (Hyderabad) Pvt Ltd. The textual, graphic, audio and audiovisual material in this site is protected by copyright law. You may not copy, distribute, or use this material except as necessary for your personal, non-commercial use. Any trademarks are the properties of their respective owners. More on Hyderabad, India. Jobs in Hyderabad.