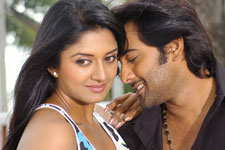 Deepa Garimella / fullhyd.com
EDITOR RATING
4.0
Performances
Script
Music/Soundtrack
Visuals
7.0
3.0
6.0
6.0
Suggestions
Can watch again
No
Good for kids
No
Good for dates
Yes
Wait for OTT
Yes
You know a movie has lost hope on itself when you see that ubiquitous funny-men Brahmanandam and Dharmavarapu aren't even dubbing their own lines in it. This is one of the many things wrong with Chukkalanti Ammayi Chakkanaina Abbayi, a movie that joins the swelling heap of films that are being released after having been in the cans for donkey's years.

Everyone involved in the movie is pretty much aware that releasing it serves no purpose at all. Except to remind people that there was once an actor called Tarun. Who should probably open another restaurant or something if refreshing public memory is an aim, because movies like these will only seal the end of his acting career (or whatever of it is left).

If it's any consolation, CACA could have actually been a good film. This is primarily because of a few very expressive actors, and a notable background score. However, onto the story.

CACA is a rip-off of Salaam Namaste, tweaked to suit Telugu sensibilities or whatever they are. That means that one premarital pregnancy has been subtracted, and that the love-making has been summarized into a short, but jerky, procedure.

So this is how it goes. Sanjay (Tarun) is an extraordinarily useless lout who lives in Bangkok with his friends. He starts wooing Sameera (Vimala Raman) using stalking tactics that should ideally put him in a lock-up. Sameera, however, falls for him and his supposedly inexplicably irresistible looks.

But Sameera and Sanjay are as different from each other as chalk is from cheese. Sameera, a medical student, is hardworking and responsible; while Sanjay, a TV anchor who works one day a week and parties the rest of the time, is irreverent and carefree.

Sameer'a aunt breaks them up for this very reason, and you regain faith in humanity. However, Sanjay is convinced about the purity of their love, so he proposes a live-in relationship. At this point, you realize that they're not exactly chalk and cheese. They're more like chalk and tofu - equally intolerable.

The two decide to live together, and Sameera practically wears the pants in the house, trying to reform him. She lands him a job, makes him quit smoking and drinking, and turns him into a family man. Until, when one day, all hell breaks loose.

CACA has its moments of sentiment. For example, the airport climax scene is well-done. The whole romance track might have worked, but the problem with the film is that every scene looks like the scriptwriter was just going through the motions. The romance, then, is bland and uninteresting.

The film, as a whole, seems a misfit and outdated in the age of rom-coms like Ala Modalaindi and Ishq, which were not spectacular love stories but were loaded with zillions of little moments of fun.

Feeble attempts at comedy by Tarun and gang hardly help CACA. And whose idea was it to dub the voices of Brahmanandam and Dharmavarapu? It's downright creepy to hear someone else speak for them.

Both Tarun and Vimala Raman are good actors, emoting well through the whole range of expressions. There's zero chemistry between them, though. Chitram Seenu helps the humour tracks a little, and Vijay Sai is about okay. Pragathi, who plays Sameera's aunt, inspires respect.

Anoop Rubens seems to have used some tunes from this film in other movies that released during the whole while CACA waited to see the light of day (there's one song that strongly reminds you of Ishq). The visuals are nothing to write home about - the film looks faded out and uncared for.

In sum, catch CACA on television if you have nothing else to do except clip your toenails.
Share. Save. Connect.
Tweet
CHUKKALANTI AMMAYI CHAKKANAINA ABBAYI SNAPSHOT 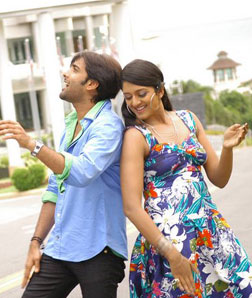 ADVERTISEMENT
This page was tagged for
telugu movie chukkalanti ammayi released
Chukkalanti Ammayi Chakkanaina Abbayi telugu movie
Chukkalanti Ammayi Chakkanaina Abbayi reviews
release date
Tarun, Vimala Raman
Follow @fullhyderabad
Follow fullhyd.com on
About Hyderabad
The Hyderabad Community
Improve fullhyd.com
More
Our Other Local Guides
Our other sites
© Copyright 1999-2009 LRR Technologies (Hyderabad), Pvt Ltd. All rights reserved. fullhyd, fullhyderabad, Welcome To The Neighbourhood are trademarks of LRR Technologies (Hyderabad) Pvt Ltd. The textual, graphic, audio and audiovisual material in this site is protected by copyright law. You may not copy, distribute, or use this material except as necessary for your personal, non-commercial use. Any trademarks are the properties of their respective owners. More on Hyderabad, India. Jobs in Hyderabad.