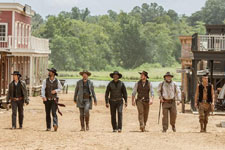 Jaiwantika Dutta-Dhupkar / fullhyd.com
EDITOR RATING
6.0
Performances
Script
Music/Soundtrack
Visuals
7.0
6.0
8.0
8.0
Suggestions
Can watch again
No
Good for kids
No
Good for dates
Yes
Wait for OTT
No
The Magnificent Seven is a nice walk down memory lane - if only to see how things have changed. Yet, the film doesn't go all out and exploit the fact that it's remaking a classic: it retains the Old-West look and the feel of the original, and experiments with the casting, characterization and narrative.

The film harks back to the Wild West era celebrating great men and great stories, in a social mileau of poor law and order. The simple village folk at Rose Creek, harassed by Bartholomew Bogue (Peter Sarsgaard), live a life of misery and oppression until a widow, Emma Cullen (Haley Bennett), hires a bounty hunter with a personal vendetta - Chisolm (Denzel Washington) - to lead an army of seven and draw up a strategy to avenge her husband's death. Together, they set out to accomplish a near-impossible task - defeat Bogue and his men, and free the villagers.

For this, they gather a crew of skilled fighters, all anti-heroes with an expertise in their own fields - Josh Faraday (Chris Pratt), Jack Horne (Vincent D'Onofrio), Billy Rocks (Lee Byung-hun), Red Harvest (Martin Senmeier), Vasquez (Manuel Garcia-Rulfo) and Goodnight Robicheaux (Ethan Hawke). They arrive at Rose Creek and thereupon interact with the villagers during their week-long stay there.

They then draw up what seems like an unsuccessful plan to arm the villagers and prepare them for battle, and also spend time at the local inn gossiping bawdily. They simply take charge like people born to command, but the already oppressed villagers offer little resistance. But the stakes are high, and a few of the Seven are martyred early in the attempt. Then ensues a struggle between Chisolm and Bogue in an old church, which is what you need to look out for.

For a film that has just so much baggage, this one re-invents the wheel - and does rather well. However, it fails to elaborate upon what exactly prompts the villagers to follow the seven blindly in unison, and also doesn't dwell much on what makes the team stick together, either. Considering Emma Cullen is out to seek revenge for her late husband, the film fails to elaborate on the special bond she shared with him as well.

The Magnificent Seven, therefore, leaves a bunch of questions unanswered, and has a rather moth-eaten plot that can almost disappoint. If only Fuqua's creative interpretation of the masterpiece could resist the temptation to focus too much on the aesthetics and less on the story, The Magnificent Seven would be more interesting.

The cinematography (Mauro Fiore) is exceptional, especially Rose Creek's prairie setting. The editing could have been better. Fuqua's direction isn't particularly imaginative, and his storytelling skills need improvement. The Magnificent Seven, nevertheless, has some good acting - Denzel Washington and Ethan Hawke give solid performances. In fact, all the seven pack a punch, and have great screen presence. The film also has brilliant music (James Horner and Simon Franglen).

The Magnificent Seven offers nothing new, but is still a good movie that blends the Old-West aesthetics with guns, scruffy dudes and good music. This one's clearly the director's experiment, but doesn't swim too far from the original, and can win hearts at the BO as well.
Share. Save. Connect.
Tweet
THE MAGNIFICENT SEVEN SNAPSHOT 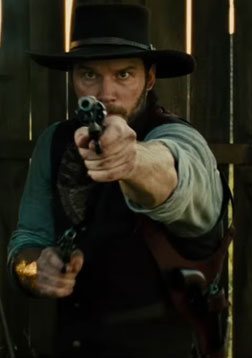 ADVERTISEMENT
This page was tagged for
The Magnificent Seven english movie
The Magnificent Seven reviews
release date
Denzel Washington, Ethan Hawke
theatres list
Follow @fullhyderabad
Follow fullhyd.com on
About Hyderabad
The Hyderabad Community
Improve fullhyd.com
More
Our Other Local Guides
Our other sites
© Copyright 1999-2009 LRR Technologies (Hyderabad), Pvt Ltd. All rights reserved. fullhyd, fullhyderabad, Welcome To The Neighbourhood are trademarks of LRR Technologies (Hyderabad) Pvt Ltd. The textual, graphic, audio and audiovisual material in this site is protected by copyright law. You may not copy, distribute, or use this material except as necessary for your personal, non-commercial use. Any trademarks are the properties of their respective owners. More on Hyderabad, India. Jobs in Hyderabad.