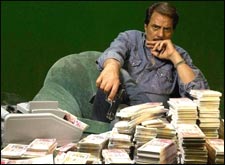 Slickness is what jumps out at you when you're watching Johnny Gaddaar. Is this what a Bollywood movie would look like if Tarantino made it?

Not quite. But if the Gettysburg Address was about Johnny Gaddaar, Lincoln would've probably said that it's a movie "about movies lovers, by a movie lover, for movie lovers". From the get go, it's apparent that Sriram Raghavan loves his movies, and Johnny Gaddaar is peppered with hat-tips and homage moments to a whole host of classics from Indian and world cinema.

As the tagline says, it's a "tingling tale of crime and betrayal, love and murder", so we can't give away too much of the plot. Vikram (Neil Nitin Mukesh), Seshadri (Dharmendra), Shardul (Zakir Hussain), Prakash (Vinay Pathak) and Shiva (Daya) are partners in semi-legal gambling adda operated by Prakash.

On the side, they engage in several quasi-legal and illegal businesses, one of which involves selling dope that the venal police inspector Kalyan (Govind Namdeo) provides them from police heists. During one such deal, Shiva is entrusted with carrying the partners' payment to Kalyan by train from Bombay to Bangalore.

Unbeknownst to the others, Vikram ke iraade nek nahin hain, and explicitly inspired by the 1971 Amitabh starrer Parwana, hatches a plan to steal the money. Vikram's affair with Mini (Rimi Sen) adds a twist of infidelity to an already dark and gloomy affair.

The first half is fast and gripping, and superbly done - a montage of set pieces, jump cuts and freeze frames and whatnot thrown in - and leaves you panting for more at the interval. Then the narrative sags a bit in the middle, but picks up the pace again towards the end, which isn't as much "climactic" as it is simply unexpected.

Neil Nitin Mukesh's debut outing is good, perhaps even very good, but scratchy in places, especially when he is pleading his innocence to various people. All said and done, a memorable portrayal of a young, ambitious and earnest go-getter's reluctant descent into treachery and casual murder.

Dharmendra is wonderful as a one-time smuggler (named Seshadri!), currently sentimental and idiosyncratic (he listens to his dead wife's voice on tape for time-pass), father figure to the others. They should've axed all his English lines, though. Except the wonderful "it's not the age, it's the mileage" bit that's in the trailers.

Vinay Pathak as the casino's manager with a gambling problem, and Zakir Hussain as the operator of an upmarket lounge, are also very good, and (surprise, surprise) if you keep the clothes on Rimi Sen and give her a decent role to play, she can more than stand and deliver.

Johnny Gaddaar is marked by way-above-par technical qualities. The titles in the beginning and the background score throughout the movie are used very effectively to impart a delightful retro '70s Hindi movie look and feel. All of which just take the slickness (there's that word again) quotient into the troposphere.


After what seems like eons, this isn't a movie about the actors or the characters or the music or the budget or the story. It's a director's movie; it's Sriram Raghavan with a tale to tell in his own very personal way, and there's no stopping him.

Johnny Gaddaar is far from perfect - there are inconsistencies and incongruity that will doubtless keep pickers of nits happy - but that shouldn't get in the way. It's better than your average multiplex movie and definitely worth a dekko for the taut storyline and the craftsmanship on display. If you know and love your movies, it moves from the "worth a dekko" category into the "don't miss it for anything" realm. A splendid time is guaranteed for all.
Share. Save. Connect.
Tweet
JOHNNY GADDAAR SNAPSHOT

See Johnny Gaddaar full details
JOHNNY GADDAAR USER REVIEWS
1 - 6 OF 6 COMMENTS
POSITIVE  |  NEGATIVE |  NEWEST  |  OLDEST  |  MOST HELPFUL  |  LEAST HELPFUL
USER RATING
7.9
27 USERS
Performances
Script
Music/Soundtrack
Visuals
NA
NA
NA
NA
Can watch again - NA
Good for kids - NA
Good for dates - NA
Wait for OTT - NA
Arpan on 23rd Oct 2007, 7:16pm | Permalink
Why would you write a review like that and give the movie a 2.5? It deserves a 4, if a Hindi movie ever did!
RATING
8
Kris Ray on 10th Oct 2007, 4:51pm | Permalink
Leave the arguments and enjoy this movie; it
RATING
8
J Chase on 8th Oct 2007, 11:47am | Permalink
My apologies for making an equivocal comment. What I meant was that the lead character (not the lead actor) was not established as someone that may not flinch at murdering his friends. Nothing about the character (not the actor) in its build-up suggested that he has the DNA of a criminal. The behaviour of the lead character (not the actor) might have been more appropriate if the build-up had shown there had been instances where his criminal traits surfaced. He's depicted as a die-hard romantic. And it's tough to accept a guy like that (character not actor) icing his buddies meticulously.
RATING
6
Cut The Chase on 7th Oct 2007, 12:01pm | Permalink
no Chase bhai, his innocent chweet looks adds to the shock value of the film. Neil performs convincingly as the angel faced "gaddaar" and that is the USP of the film, apart from the magnificent screenplay and direction
RATING
10
J Chase on 1st Oct 2007, 1:49pm | Permalink
Movie primarily misfires because of the unconvincing DNA of the lead character. It's hard to establish a dovey-eyed tween as a cold-blooded opportunist. If only THAT part was taken care of, this already entertaining movie, would have been brilliant.
RATING
6
Priyanka Rao on 29th Sep 2007, 11:41am | Permalink
Very good movie. Spend your bucks on this one and not on Chirutha
RATING
8
LEAVE A COMMENT
fullhyd.com has 700,000+ monthly visits. Tell Hyderabad what you feel about Johnny Gaddaar!
MORE MOVIES
Latest Reviews
Elvis
Sammathame
Jugjugg Jeeyo
Godse
Nikamma
more
Virata Parvam
Ante Sundaraniki
Janhit Mein Jaari
Jurassic World: Dominion
Jurassic World: Dominion (Te...
Jurassic World: Dominion (Hi...
Vikram
MAJOR
MAJOR (Hindi)
F3: Fun and Frustration
Contemporary Reviews
Next
Heyy Babyy
Spiderman 3
Adavari Matalaku Ardhale Ver...
Lakshyam
more
The Transformers
Pellaindi Kaani
Adavi Ramudu
Shivaji - The Boss
Vijayadasami
No Smoking
Chanti
Baadal
Bangaru Kamini
Random Reviews
Gamyam
AI: Artificial Intelligence
Resident Evil (Hindi)
Kingdom Of Heaven
Pandugadu
more
Jhummandi Naadam
Toy Story 3
Mark
Batman 3 - The Dark Knight R...
Ship Of Theseus
X-Men: Days Of Future Past
Pandaga Chesko
Dhruva
Blackmail (2018)
Pagalpanti
SEARCH MOVIES
Dissatisfied with the results? Report a problem or error, or add a listing.
ADVERTISEMENT
SHOUTBOX!
{{todo.name}}
{{todo.date}}
[
ip{{todo.ip}}
]
{{ todo.summary }}... expand »
{{ todo.text }} « collapse
First  |  Prev  |   1   2  3  {{current_page-1}}  {{current_page}}  {{current_page+1}}  {{last_page-2}}  {{last_page-1}}  {{last_page}}   |  Next  |  Last
{{todos[0].name}}

ADVERTISEMENT
This page was tagged for
the johnny gaddaar movie in hindi
Johnny Gaddaar hindi movie
Johnny Gaddaar reviews
release date
Neil Nitin Mukesh, Dharmendra
Follow @fullhyderabad
Follow fullhyd.com on
About Hyderabad
The Hyderabad Community
Improve fullhyd.com
More
Our Other Local Guides
Our other sites
© Copyright 1999-2009 LRR Technologies (Hyderabad), Pvt Ltd. All rights reserved. fullhyd, fullhyderabad, Welcome To The Neighbourhood are trademarks of LRR Technologies (Hyderabad) Pvt Ltd. The textual, graphic, audio and audiovisual material in this site is protected by copyright law. You may not copy, distribute, or use this material except as necessary for your personal, non-commercial use. Any trademarks are the properties of their respective owners. More on Hyderabad, India. Jobs in Hyderabad.