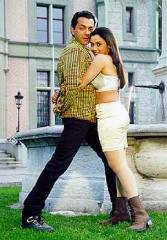 It appears that the action bug has finally bitten Bobby Deol really hard. However, in his attempts to don the mantle of the angry-young-man, he fails miserably. Director Raj Kanwar gives a shabby treatment to the script which is supposed to be based on the Hollywood thriller, Devil's Own. The director's perspective on the issue of terrorism lacks sensibility and is misleading. His justification of the hero's purchase of arms from Pakistani militants raises questions about the principles of the censor board, which while raising hue and cry over the issue of obscenity in films, has let off a film that conveys an outrageous message to the public.


The story has nothing new to offer. It's just a tale of a youth who takes up arms to seek revenge on those who killed his parents. Rajbir (Bobby Deol) is a terrorist who clamours that terrorists are not born and that it is the society that creates terrorists. Unlike the conventional terrorists who have grand agendas, Rajbir's only agenda is to kill Ashutosh Rana, a corrupt DIG, who years ago wiped out the entire family of Rajbir. So Rajbir changes to Badal, a simple garage owner and enters a hill-station where Ashutosh Rana is posted. He befriends Amrish Puri, a police officer who works under Ashutosh Rana and simultaneously romances with Rani Mukherji. After a few songs and some drama, Badal's true colours are revealed and Amrish Puri goes to catch him. But since an Indian hero cannot be stopped from accomplishing his task, Amrish Puri changes his mind in the last moment to allow Badal to kill Ashutosh Rana and thus ends another morbid Bollywood movie.


The movie lacks the touch of reality. It is strange that Bobby Deol had to become a full fledged terrorist looting banks and purchasing arms from Pakistanis when his only aim was to kill Ashutosh Rana, which could have been done in a simpler manner. Bobby Deol in his reticent behaviour as Badal was probably trying to do a Manisha Koirala in Dil Se but fails in his role as a terrorist. In the end, he appears to be nothing more than a trivial street fighter. Anu Malik's music is hummable in a few songs. Ashish Vidhyarthi, as Rajbir's mentor, Johnny Lever as the satirical Sardarji Guler Mehndi, Ashutosh Rana and Amrish Puri perform well, but the unconvincing storyline lets down this film.

ADVERTISEMENT
This page was tagged for
BAADAL
Baadal hindi movie
Baadal reviews
release date
Bobby Deol, Rani Mukherjee
Follow @fullhyderabad
Follow fullhyd.com on
About Hyderabad
The Hyderabad Community
Improve fullhyd.com
More
Our Other Local Guides
Our other sites
© Copyright 1999-2009 LRR Technologies (Hyderabad), Pvt Ltd. All rights reserved. fullhyd, fullhyderabad, Welcome To The Neighbourhood are trademarks of LRR Technologies (Hyderabad) Pvt Ltd. The textual, graphic, audio and audiovisual material in this site is protected by copyright law. You may not copy, distribute, or use this material except as necessary for your personal, non-commercial use. Any trademarks are the properties of their respective owners. More on Hyderabad, India. Jobs in Hyderabad.