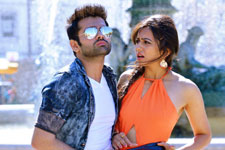 Josh / fullhyd.com
EDITOR RATING
5.0
Performances
Script
Music/Soundtrack
Visuals
6.0
4.0
5.0
7.0
Suggestions
Can watch again
No
Good for kids
No
Good for dates
No
Wait for OTT
No
Clichés by themselves are not a huge problem. Barring a few pathbreaking creators, most makers work with templates. A lot of creative story-telling works with long-standing traditions often telling the same stories. Practically everybody is attempting to flesh out the skeleton they've chosen and breathe life into it. Some end up being God. Some, Frankenstein. But that has its own merits. The sorry ones are the those who hand you over a bag of bones. It can be gross.

Here's a sundry list of things that feature in Pandaga Chesko - appended to each item are some other examples employing the same or similar trope.

1. Title comprising popular phrase or word which has no connection to the plot (Racha, Keka, Rabhasa, Biryani)
2. Wealthy hero living abroad (Attarintiki Daredi, Greekuveerudu, NVNV, Santosham)
3. Comes to India for some contrived, often family related reason (same list as the previous one)
4. Bird-brained heroine whose supposed activism is used for comic effect and is conveniently forgotten later on (Temper, Baadshah)
5. Feuding (members of) families who were inseparable at one point but can't see each other in the eye now (oh, come on, you know them all - anyway, Brundavanam, Govindudu Andari Vadele, Peddarikam, Ready...)
6. Move to rural setting for the entire second half to one of the large houses of the fractured families (Ready, Darling, Brundavanam, Mirchi, Denikaina Ready)
7. Give Brahmanandam an unlikely name with very specific nomenclature - one word of non-Telugu origin and the next a common Telugu name (Gachibowli Diwakar, McDowell Murthy, Paris Prasad, ISKCON Ramana, and a favourite - Kill Bill Pandey)
8. Manhandle Brahmanandam (Pokiri, Dookudu, Doosukeltha, Chennakesava Reddy, Jalsa, Brundavanam... sigh)
9. Elaborate ploy to trick the dangerous goonish patriarchs of the families to soften up and realise the importance of values like love and friendship (umm, there's a word limit to the review)

You've probably figured out the story by now, but nevertheless - Karthik (Ram) is a self-made millionaire living in Portugal with his family. Engaged to another business tycoon (Sonal Chauhan), he is obsessed with productivity and profit. A few days to the marriage, he has to leave for India to sort out a certain inconvenience.

While in Hyderabad he runs into an activist (Rakul Preet Singh) running an environmental NGO. The heroine has a father and an uncle who have shared custody over her and who get into bitter fights with each other over this matter. Thereon it's about Karthik rebuilding those burnt bridges whilst attempting to woo his lady love.

Now with a core this copi... oops, inspired, the script is hungrily looking for some good execution. Of which there is very little.

Yes, what Pandaga Chesuko has going for it is that through an almost mechanical narrative that lasts over two hours, the audience frequently bursts into peals of laughter. And that is perhaps the philosophy of the makers - doesn't matter if the story has no originality, doesn't matter if the execution is as ordinary as it comes, doesn't matter if we hit the new thresholds of implausibility, we'll at least dish out some good comedy. The only place in the movie where the writers and the director seem to have put in some heart into the work is in the funny sequences and the punchy lines. They even try their hand at prosody (praasa as we fondly call it). Sure, it's no Trivikram or Srinu Vaitla, but it's funny all right.

So you'll like the gigs involving Brahmanandam, JP, Vennela Kishore, and even Abhimanyu Singh. And the hilarious SVSC spoof featuring a duo called the 'Bezawada Brothers'. There's also the joy watching some of the seasoned actors like Saikumar, Sampath, Pavitra Lokesh and M S Narayana. The latter has a comedy track which makes you laugh out loud. Then you remember something, and you might take a moment to get out of that dull melancholy.

Oh, and Sonal Chauhan is creating a trend of her own - the Bikini Scene. Legend had a few seconds, maybe. There's a full song here for anyone interested.

The production values are high as would be expected from a film of this budget - the producer's checklist has all the boxes ticked. And the choreography is top notch (Ram dances like a dream).

Pandaga Chesko would normally be a tedious watch, but watch it with extreme open-mindedness, and you will be entertained quite reasonably. You'll also perhaps appreciate Ram's hard work and the fact that Rakul Preet Singh is actually speaking Telugu. And if you begin to get bored, don't worry about it. There's a joke right around the corner. Depending on your bent of mind, it might just be worth that trip to the theatre. 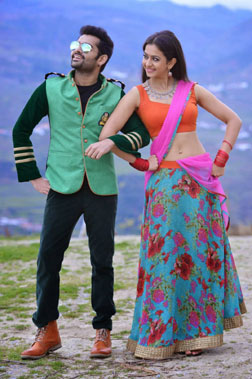 See Pandaga Chesko full details
TOP COMMENT
The Common Movie Goer on 30th May 2015, 3:24pm | Permalink
Also, a more apt title would have been Thaddinam Pettuko.
5
1
PANDAGA CHESKO USER REVIEWS
1 - 2 OF 2 COMMENTS
POSITIVE  |  NEGATIVE |  NEWEST  |  OLDEST  |  MOST HELPFUL  |  LEAST HELPFUL
USER RATING
1.0
1 USER
Performances
Script
Music/Soundtrack
Visuals
3.0
1.0
2.0
10.0
Can watch again - No
Good for kids - No
Good for dates - No
Wait for OTT - No
Omar the chechen on 5th Jun 2015, 7:31pm | Permalink
rakul preet singh should be given the title of queen of commercial bullcrap.All her movies,maybe barring venkatadri express are brainless commercial masala mass movies where she does nothing more than flaunt her abs,pout and dance around. Her upcoming movies with Ravi Teja and Ram Charan will be no different. Acting wise I think she is the worst "actor" in mainstream Tollywood
Hari on 6th Jun 2015, 4:02pm | Permalink
No, the worst actress in TFI crown goes to Kajal Agarwal
omar the chechen on 6th Jun 2015, 4:09pm | Permalink
Kajal cant act..but she appeared in some decent movies, like darling and.....oh I cant name a decent movie...you win..its kajal
The Common Movie Goer on 30th May 2015, 2:45pm | Permalink
TL;DR Not an entertainer, and definitely not a family entertainer.

This movie plain sucked. At least one of the people responsible for the existence of this film was high when they decided to make this film. As my user name suggests, I am a common movie goer who expects to either laugh and/or be excited by violence at the very least. Great screenplay is a bonus This movie fails in almost every department imaginable except for styling and production values.

First up, the plot. It's non-existent. Nothing much to write here.

Then comes the screenplay, which seems to be a mish-mash of all the movies that have preceded this movie. Highlighting the hypocrisy of the villain/antagonist is a done to death trope and should be retired form TFI with grace. Or is it too late for that?There's only so many times you can unite a broken family by making the bad guy realize his folly through "cleverly/deceitfully"(notice the quotes) orchestrated confusion. I am willing to leave my brain behind at home but when the hero needs luck at least a hundred times to hide the truth, it becomes grating.

The comedy. Wow. It was bad. Deplorable even. Brahmi probably has the worst role of his career here. It was just nerve-wracking listening to him utter repeatedly that he wants to molest Sonal Chauhan (full disclosure- I am a huge Sonal Chauhan fan). The rest of the comedy is vulgar, and the filmmakers were desperate enough to make Raghubabu drop his pants. Lungi to be more precise.

Coming to the leads. Ram's dance is great and sticks to the family-drama template of acting. Sonal Chauhan's role was certainly conceived by a misogynist. And it's not because she chooses to ooze glamour. It's because she is treated like a total bakra in the movie. And what was with that step in a song where Ram juggles her head with his feet? That was just sad. Rakul Preet brought life to an otherwise cardboard character. Both heroines deserve better.

I only laughed once in the movie. Once. That too in a song which goes "lekapothe mana Thaman laga dappu kotti naatu ga cheppana."

Stay away if you are a part of the mass audience. Stay even farther away if you are considering going with your family. The censor board officials were definitely catching up on sleep when this was being screened. Unintentional or not, we will never know. They even let WTF slip through. I know it's not a big deal but when words like dobbay, em pikavu, bongu and Bombay are being censored, they should take care.