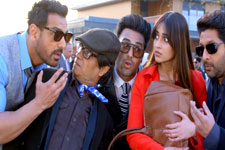 T J Reddy / fullhyd.com
EDITOR RATING
1.0
Performances
Script
Music/Soundtrack
Visuals
2.0
1.0
1.0
2.0
Suggestions
Can watch again
No
Good for kids
No
Good for dates
No
Wait to rent it
No
Paagalpanti (madness) is doing the same thing over and over again but expecting different results.

Paagalpanti is hoping and praying that this film has a plot.

Paagalpanti is expecting a story that begins with an explosion at a fireworks store in London, and then moves to a truck chase, and then to a gangster's mansion, and then to a horse race, and then to a "haunted house" where the ghost does an item dance, and then to a Nirav Modi rip-off, and then to CGI lions, to make any semblance of sense. Let alone a human, the grammar editor on my laptop couldn't make sense of that sequence of events. This plot killed AI.

Paagalpanti is expecting me to remember any of these characters' names and waste the precious little space I have left in my brain after this movie violently bludgeoned my delicate skull with its stupidity.

Paagalpanti is watching the character played by Kriti Kharbanda be as dumb as bricks about every little thing the world has to offer yet somehow never forget to wear clothes that show off just the right amount of cleavage for maximum sex appeal.

Paagalpanti is a film whose editing flow is akin to that of a Tik Tok video. I know this because I used Tik Tok's big brother Vine a long time ago and had to delete it before I poured bleach into my eyeballs.

Speaking of pouring bleach into one's eyeballs, Paagalpanti is director Anees Bazmee expecting an audience to be okay with an item song that has a dad singing about how hot his daughter is.

The employees of the theatre indulged in some Paagalpanti, too. They chose to revel in the misfortune of their patrons like the makers of this film. The least they could have done was to find out the brand of super-glue the characters in the film used, and handed over a tub of it to every paying customer. The viewers would have at least had a choice to glue their eyes and ears shut.

Why would an audience do that, you may ask? I'd say, if you are masochistic enough to walk into this film willingly, you will enjoy torturing yourself more. It's par for the course. Why not bring the Paagalpanti full circle?

But Paagalpanti doesn't end with that circle. Like a virus, the circles multiply out of control until they take control of your senses and emotional state. You watch in horror as Anil Kapoor and Saurabh Shukla turn into painfully unfunny caricatures. Anil Kapoor plays a character Tushar Kapoor would reject, and yet he dives into it, throwing caution to the wind.

We commend the Paagalpanti of every actor who chose to be a part of this film. Every single one of them dives into this film's script head-first with no concern for their well-being. But little do they know that there is no water in the pool in terms of good writing. There is nothing to cushion the blow except for the cold, hard, unforgiving floor. Every joke lands with a hard thud and the splatter of viscera everywhere.

Paagalpanti is expecting my mind not to be at the bottom of the gutter where this script lay when I hear character names such as Tulli and Bulli.

Paagalpanti is expecting my anger with this film not to be turned to 11 when I heard pieces of score from Vikram Vedha, Aadukalam, Theri and many more movies used in this film. Blatant theft from a film that criticizes Nirav Modi for robbing the people of this country. The irony is strong with this one.

This paagalpanti with the audio is not limited only to the score. The world is a cruel place, lest we forget. The film's climax is a horrible hodge-podge of dialogues with live recorded audio and ADR alternating every few seconds. We now feel bad for comparing this wretched excuse for a film to the videos on Tik Tok. At least the blokes and gals on that app are trying their very best to entertain with decent editing and passable audio.

Paagalpanti believes that horrendous CGI and a recurring combination of wide-mid-close serves as visual flair.

Paagalpanti believes an audience will forgive all these faults and many more by inserting a random Desh Bhakti angle into the mix with no setup. What? What do you mean that didn't work? Are you not a bhakt of this desh? Why are you not emotional and liking this film? You are an anti-national, aren't you? These libtards are always expecting common sense.

When a director insults the art of cinema by blatantly stealing another artist's expression, work and effort while simultaneously insulting his audience, his work deserves the harshest sentence possible. If you try to stop everyone you know from watching this, that's at least a start.
Share. Save. Connect.
Tweet
PAGALPANTI SNAPSHOT 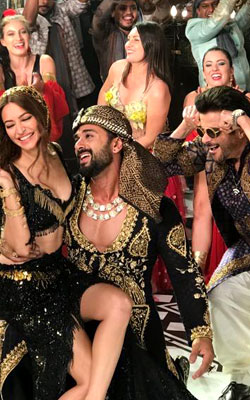 ADVERTISEMENT
This page was tagged for
Pagalpanti hindi movie
Pagalpanti reviews
release date
Anil Kapoor, John Abraham
theatres list
Follow @fullhyderabad
Follow fullhyd.com on
About Hyderabad
The Hyderabad Community
Improve fullhyd.com
More
Our Other Local Guides
Our other sites
© Copyright 1999-2009 LRR Technologies (Hyderabad), Pvt Ltd. All rights reserved. fullhyd, fullhyderabad, Welcome To The Neighbourhood are trademarks of LRR Technologies (Hyderabad) Pvt Ltd. The textual, graphic, audio and audiovisual material in this site is protected by copyright law. You may not copy, distribute, or use this material except as necessary for your personal, non-commercial use. Any trademarks are the properties of their respective owners. More on Hyderabad, India. Jobs in Hyderabad.