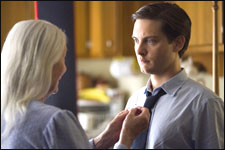 And occasionally comes an unexplained glob of viscous black goo, which propagates rectilinearly and accurately from outer space to the very spot where you're making out with your girlfriend.

The latest offering from the Spiderman franchise isn't the best one, but if you're the kind of person who wants to take a long hard look at a superhero's life when he's not in costume, you'll want to see version 3. The action actually takes the side seat, if not the back seat, and a lot of time is spent on exploring the emotional landscape of our arachno-human hero.

With a gigantic budget at his disposal, Sam Raimi appears to have super-sized everything. There's more mush, there are more villains, there's more CGI, and there's a whole bunch of introspection. One side effect of all this tremendous amount of stuff is that the story tends to get told in bits and pieces, and the patchwork effect is hard to forget.

Peter Parker (Tobey Maguire) is on top of the world. He's young, his nightdress is the rage of town, and he's deeply in love with Mary Jane Watson (Kirsten Dunst). MJ is all set to embark on a glittering career on Broadway, and life is more or less perfect.

Unbeknownst to them, some things are icky. One is the above-mentioned menacing glob which latches onto and eventually attaches itself to the costume and turns it black. The other is Harry Osborn (James Franco), erstwhile best buddy now Goblin junior (with a skateboard flying device thing from Hell), thirsting to avenge his father's death.

A third is Flint Marko (Thomas Haden Church), Uncle Ben's killer, who accidentally stumbles into an unexplained particle physics experiment and is reincarnated as the gravelly Sandman. The final incipient pestilence is photographer Eddie Brock (Topher Grace), who will gladly accept secondhand stellar goo from Peter and morph into Venom.

With so many baddies jostling for space, you'd think that Spidey will have his hands full trying to save the hapless citizens of New York. Not so. Most of the time the villains lie low, although when they're in full form, the effects are pretty spectacular.

Things begin to go downhill for Peter when MJ is fired and their relationship enters choppy waters, because of his popularity and irritating smugness. It doesn't help that the goo in his suit brings out the bad boy, the one who "dances" on the street, makes eyes at passing women, beats up and humiliates Harry and Eddie, and gets pleasure out of mindless revenge. It is a frightening look into that "what-if" world where superheroes abuse their powers (the possibilities with the Invisible Man alone are beyond contemplation!).

Eventually, though, sense prevails (and the goo decamps), and good 'ol Spidey comes back to kick some behind, with assistance from unexpected quarters. The climax is a dizzying 4-creature trapeze act with MJ hanging from a thread thrown in.

Tobey Maguire continues to impress with his ability to make us empathize with a surreal comic book character. Having worked in 3 movies together must've helped finetune the onscreen dynamic between him and Kirsten Dunst.

James Franco has a few noticeable moments, and Thomas Haden Church is suitably gritty as Sandman. It's a bit odd to have a character from That Seventies Show as a villain, but otherwise Topher Grace is decent as the annoying Eddie Brock. J K Simmons, alas, is seen only for a couple of minutes, but is sidesplitting.

If you really think they matter, a few things about the plot are iffy. The completely random coincidences pose several rhetorical questions. What is the blob? Where did it come from? Why did it choose Peter? What's with it and gongs? How did Eddie and Spiderman end up in close proximity when the blob decided to move house? Why does it leave Peter's teeth alone, but turn Eddie's mouth into piranhas' envy? What was that mysterious experiment in particle physics that created the Sandman all about?

For those of us who're old enough to remember the Sunday evening half hour with Spidey on DD, the Spiderman movies are revelations. We didn't know Spiderman could be human in ways we understand. Heck, we didn't want him to be human - we wanted him to be the dude who'd been bitten by a radioactive spider.

Then we grew up, and when the first Spiderman movie came out, we were amazed that we actually loved this superhero with everyday problems. Superman with his other-worldly powers and Bruce Wayne with his fabulous wealth are way out of our orbits. But Peter Parker with job trouble, girl trouble, rent trouble, costume design trouble and wedding proposal trouble is one of us.

Spiderman 3 is less about the spider and more about the man, and if you can let the inconsistencies be, and you have the stomach to watch a superhero pull off his mask and cry, you'll probably like it.

See Spiderman 3 full details
SPIDERMAN 3 USER REVIEWS
1 - 15 OF 15 COMMENTS
POSITIVE  |  NEGATIVE |  NEWEST  |  OLDEST  |  MOST HELPFUL  |  LEAST HELPFUL
USER RATING
6.6
69 USERS
Performances
Script
Music/Soundtrack
Visuals
NA
NA
NA
NA
Can watch again - NA
Good for kids - NA
Good for dates - NA
Wait for OTT - NA
Nikhil Pednekar on 19th May 2007, 11:04pm | Permalink
sounds like the reviewer has wedding proposal problems. can we mumbaikars offer some asha?
RATING
6
Omkar on 11th May 2007, 5:13pm | Permalink
5 stars just for spl effects.bow to spidey graphics persons
RATING
10
Venkatesh G on 10th May 2007, 9:25pm | Permalink
The movie is OK, but compare to 1st and 2nd parts it is not good. i think it is the only best film to watch in this summer
RATING
8
Gabbar Singh on 10th May 2007, 2:29pm | Permalink
Pretty disappointing, especially when compared to the first two movies. Not what was expected of the movie at all. A big disappointment for especially for the comic book fans. Good acting from all the actors, the director and the script writer just need to go back to school again.
RATING
4
Hyderabadi on 8th May 2007, 3:15pm | Permalink
The Webbed wonder is back again! And this time the web is more around himself rather than around his nemesises! Spiderman 3 brings to the screens an angst-ridden Peter Parker who is steadily letting the people
RATING
6
Aamchi Hyd on 7th May 2007, 8:49pm | Permalink
Overwhelming. Definitely one of the better additions to the genre and the series as well. There are gaffes in the plot that should have been more fleshed out, and Raimi should take responsibility of that. That said, definitely a comic movie of epic proportions, relegating the Superman and the Batman movies to the background, both in terms of scale and box office take. Hope there's a fourth instalment that keeps the plot free of cliches, and perhaps has few of the following villians - the Hobgoblin, the Lizard, the Scorpion, the Sandman, the Rhino, Mysterio, Morbius the Living Vampire, Morlun, Hydro Man, Shocker, the Vulture, Electro, Chameleon, Kraven the Hunter, Carnage, and the Kingpin. Or even perhaps the Sinister Six, where there are 6 villians to oppose Spidey.
RATING
6
A B on 7th May 2007, 7:05pm | Permalink
lousy movie....
RATING
2
Shakemam on 7th May 2007, 2:26pm | Permalink
Ok Movie.. Definately better than watching any tolly or bollywood movie...
RATING
8
Spidey Hello on 7th May 2007, 12:14pm | Permalink
never seen before graphics, which were so well executed, that u might never feel it happened on the screen. it involves u so much that u feel that ur part and parcel of the scene on the screen happenning. wow, best hollywood movie so far. kudos to sam raimi.
RATING
10
V Prashanth on 6th May 2007, 7:02pm | Permalink
really nice movie!definitely worth a watch and the graphics are too good to be true!!
RATING
10
Gaseous Beyondus on 6th May 2007, 3:53pm | Permalink
A very entertaining review by Ravi Mundoli and I enjoyed reading it. I will skip the movie though
RATING
2
Michael Corleone on 6th May 2007, 9:17am | Permalink
Good review. Left out the gay angle though: The Osborne Sr.'s secret lover comes out of the closet. That and spidey says "oh, you came" just too well. I have no problems with that but what I do have problems with americanising spidey's costume when spidey dons the good ol red n blue again. Another thing that annoyed me is that the movie sounded so much like a sermon when they talked so much about forgiveness. The only plesant surprise was to see Stan Lee in the movie(which went unnoticed by most of the ignorant audience). Btw, did the contract say 'there shall be only two active villans at any given point of time'. And those who see that there is a new hero who actually saves the girl and the posterboy even if it calls for sacrifizing his life... well don't like him too much because the movie contract says 'if your charecter saves more people than spiderman, the charecter shall perish'.
RATING
6
Sasi Kanth on 6th May 2007, 12:39am | Permalink
Please read the comics (the original origin) before you start passing up as if you knew everything about them and him.
RATING
6
Talonnicus on 5th May 2007, 9:05pm | Permalink
kept the verbal acrobatics at a minimum ... passable review..but far better than other fullhyd spawn must'say...so..toshing!
RATING
6
Lucifer on 5th May 2007, 4:52pm | Permalink
Good review - the first one on fullhyd.com that I managed to read from start to finish in a long long time.
RATING
6
LEAVE A COMMENT
fullhyd.com has 700,000+ monthly visits. Tell Hyderabad what you feel about Spiderman 3!
MORE MOVIES
Latest Reviews
Pakka Commercial
Rocketry (Telugu)
Rocketry (Hindi)
Shikaaru
Elvis
more
Sammathame
Jugjugg Jeeyo
Godse
Nikamma
Virata Parvam
Ante Sundaraniki
Janhit Mein Jaari
Jurassic World: Dominion
Jurassic World: Dominion (Te...
Jurassic World: Dominion (Hi...
Contemporary Reviews
Adavari Matalaku Ardhale Ver...
Lakshyam
The Transformers
Pellaindi Kaani
Shoot 'Em Up
more
Pournami
The Bourne Ultimatum
Heyy Babyy
Next
Johnny Gaddaar
Adavi Ramudu
Shivaji - The Boss
Vijayadasami
No Smoking
Random Reviews
Eshwar
Raju Chacha
Cheliya Cheliya Chirukopama
The Blue Lagoon (Hindi)
Sitakoka Chiluka
more
The International
Happy Returns
The Rise Of The Planet Of Th...
Batman 3 - The Dark Knight R...
Nasha
Kochadaiyaan - The Legend (3...
Dil Dhadakne Do
Trivikraman
Peter Rabbit
Frozen 2
SEARCH MOVIES
Dissatisfied with the results? Report a problem or error, or add a listing.
ADVERTISEMENT
SHOUTBOX!
{{todo.name}}
{{todo.date}}
[
ip{{todo.ip}}
]
{{ todo.summary }}... expand »
{{ todo.text }} « collapse
First  |  Prev  |   1   2  3  {{current_page-1}}  {{current_page}}  {{current_page+1}}  {{last_page-2}}  {{last_page-1}}  {{last_page}}   |  Next  |  Last
{{todos[0].name}}

ADVERTISEMENT
This page was tagged for
Spiderman 3 english movie
Spiderman 3 reviews
release date
Tobey Maguire, Kirsten Dunst
theatres list
Follow @fullhyderabad
Follow fullhyd.com on
About Hyderabad
The Hyderabad Community
Improve fullhyd.com
More
Our Other Local Guides
Our other sites
© Copyright 1999-2009 LRR Technologies (Hyderabad), Pvt Ltd. All rights reserved. fullhyd, fullhyderabad, Welcome To The Neighbourhood are trademarks of LRR Technologies (Hyderabad) Pvt Ltd. The textual, graphic, audio and audiovisual material in this site is protected by copyright law. You may not copy, distribute, or use this material except as necessary for your personal, non-commercial use. Any trademarks are the properties of their respective owners. More on Hyderabad, India. Jobs in Hyderabad.