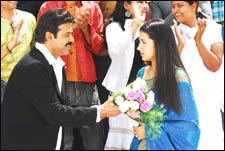 EDITOR RATING
6.0
Performances
Script
Music/Soundtrack
Visuals
NA
NA
NA
NA
Suggestions
Can watch again
NA
Good for kids
NA
Good for dates
NA
Wait to rent it
NA
It's hard to go into a show of Aduvari Matalaku Ardhale Verule without a sense of cheery anticipation. First, the name and the promos seem to suggest a romantic comedy that's also slick-looking. Then, Venkatesh and Trisha are both delightful at comedy. And finally, Venkatesh, an A-lister with universal appeal, is returning to the screens after 15 months.

AMAV however turns out to be a meandering, ho-hum film - at least in one half - that fails to deliver either on the romance or on the comedy. The movie is not happening in the first half and has déjà vu as the watermark for most scenes in the second, there are more gaps of logic than you paid for, and there are too many scenes where they do just a little more than necessary. For the most part, then, Venkatesh is the life-support system for the film, with nothing else going for it.

Ganesh (Venkatesh) cannot get a job even after a decade of trying, and has a strained relation with his father (Kota Srinivasa Rao) due to this. One day he sees Kirti (Trisha), and, falling in love with her instantly, follows her to realize that she is a software professional.

He makes a Herculean effort to get a job in that company as a programmar, and manages it in one of the several improbabilities dotting this film (another being how he completes a huge task single-handedly overnight, given how much of a novice he is). Incidentally, software professionals are going to find a lot of stuff funny in the first hour.

Kirti is his boss, and very intolerant. He tries to get close to her when they go to Australia on an assignment, but it just doesn't happen. The first half is also the bane of the film. There is just no depth in the characterization of Kirti or in the interaction between them - at the end of it, you don't know just what her problem is (actually, it's not convincing even by the end of the film). You don't get the point of the relation between Ganesh and his father either, and its relation to the second half hangs by a thread.

There is also no light-heartedness in the first half - Sunil, the only comedian in the film (with the exception of Suman Shetty in the second half), does almost nothing, and Venkatesh himself has no great lines or scenes. If you go in expecting a Nuvvu Naaku Nacchaav or even a Malliswari, it's easy to feel sorry for you. And there is simply no mush.

The first half ends with Kirti telling Ganesh to get out of her life and leave her alone since she is simply not interested. The second then sees a heart-broken Ganesh go to the marriage of his friend Vasu (Sriram) in a village for a change of scene, where he unexpectedly finds Kirti again in a complicated situation. But no, that doesn't taste nearly as good as it sounds. As he mingles with the huge family of Vasu and endears himself to them, you get a feeling of having seen this several times. While this part is generally more engaging than the first half, and is funnier, it still is average fare.

Venkatesh is the best thing about the film, of course, adding a half-star to the rating and 3-4 weeks to this one's box-office destiny. Trisha's character is poorly scripted, and unconvincing in how it evolves, leaving her little scope to impress. Sriram as Vasu turns in a dignified performance. The girl who plays Trisha's sister (Swati) who has a huge crush on Venkatesh is impressive. The music is pretty routine stuff.

One of the interesting aspects of the movie is its legitimizing software professionals as movie heroes. For an industry that considers academic success and nerdiness as limiting in empathy among viewers, and idolizes as heroes people who are bad as students since that is where the masses are, that's a leap forward. Perhaps in a couple of years you'll see a movie with its hero being an IITian. (Actually, we are told there is actually a movie coming up - Five Point Someone directed by Rajkumar Hirani - where the heroes, to be played by Abhishek Bachchan, Saif Ali Khan and Hrithik Roshan, are IITians.)

AMAV is worth a watch for the light-hearted parts of its second half and for Venkatesh's performance. There doesn't seem to be much challenging it this summer except maybe Munna, and that should help it at the BO.
Share. Save. Connect.
Tweet
ADAVARI MATALAKU ARDHALE VERULE SNAPSHOT

my congrats to all people who worked for this movie, to reach 100days.

RATING
10
S S on 20th Jun 2007, 1:04pm | Permalink
priyanka..dont you think 70 days is good these days seems like it is holding on inspite of all the movies out there
RATING
8
Dr.No on 12th Jun 2007, 1:57pm | Permalink
Rupa sastry,sridhar and ram yara are all RIGHT..This movie is a strict NO to even those who are really jobless.
RATING
2
Rupa Sastry on 5th Jun 2007, 2:20pm | Permalink
A very poor movie which just lacks credibility. The first half is ridiculous, wonder how a the hero manages to get job after 10 years of idle time.
The father and son seems to be of same age, Venky you are too lod to play such roles.
No chemistry between the hero & heroine, but suddenly in the end the heroine could manage to love him.
sec half is just a typical Venky type of movies.
This movie is a total nonsense with a ridiculous story line.

RATING
2
RAm Yara on 16th May 2007, 3:05pm | Permalink
Cheap Comedy and False Concept on IT Industry.Non Feasible Software activities are ridiculous.
RATING
2
Maggie on 13th May 2007, 2:20pm | Permalink
it lacks something which i couldnt pinpoint.but its o film
RATING
6
Priyanka Rao on 12th May 2007, 10:32pm | Permalink
though climax is predictable script & cast are perfect.
RATING
8
Srinu B on 9th May 2007, 4:33pm | Permalink
very good
RATING
10
Pratap Reddy on 6th May 2007, 10:06am | Permalink
Liked the movie. Can see once and not more. Has some tragic elements ... and some vulgar comedy in the second half. Venki's acting was excellent. Movie is pretty neat and unlike Someone called 'Sridhar' down here who commented on the direction, screenplay and stuff, I would have to say... Man, stop seeing South Indian movies if you cannot appreciate a good work as good work. The Direction was more or less a good job and neat... there were no great flaws and no great glitches to point out. These days it has become a fashion for people to praise Hollywood and downsize our own cinema. Try appreciating good work as good work when it is.
RATING
8
Vissu on 3rd May 2007, 2:26pm | Permalink
i st half beautyful,2nd worse
RATING
6
Sridhar on 2nd May 2007, 9:28pm | Permalink
Junk film. I was shocked to see Venky act in such an illogical film. The script is weak, screenplay shoddy, and the characters are poorly sketched. All in all, a very disappointing film. Unfortunately, it might be a hit since the Andhra audience wants movies which require no thinking just like Madhumasam and Desamuduru - crap films that did well at the box office.
RATING
2
Dinakar on 2nd May 2007, 5:49pm | Permalink
must watch movie.family movie that too venki hero.complete family entertainer
RATING
10
Suresh Kumar on 2nd May 2007, 10:11am | Permalink
umm very bored to watch this type of movie
RATING
2
S A on 1st May 2007, 2:26am | Permalink
Loved this movie. Good movie to watch.
RATING
8
Abilash on 30th Apr 2007, 11:23pm | Permalink
Good Movie.. Venky rocks....
RATING
10
1 - 15 OF 19 COMMENTS  |  NEXT  |  LAST
LEAVE A COMMENT
fullhyd.com has 700,000+ monthly visits. Tell Hyderabad what you feel about Adavari Matalaku Ardhale Verule!
MORE MOVIES
Latest Reviews
The 355
83
83 - Telugu
Shyam Singha Roy
The Matrix Resurrections - H...
more
The Matrix Resurrections
Pushpa: The Rise - Hindi
Pushpa: The Rise
Spider-Man: No Way Home
Spider-Man: No Way Home - Hi...
Spider-Man: No Way Home - Te...
Chandigarh Kare Aashiqui
Akhanda
Satyameva Jayate 2
Ghostbusters: Afterlife
Contemporary Reviews
Lakshyam
The Transformers
Pellaindi Kaani
Shoot 'Em Up
Pournami
more
The Bourne Ultimatum
Rakhi
Spiderman 3
Heyy Babyy
Next
Johnny Gaddaar
Adavi Ramudu
Shivaji - The Boss
Vijayadasami
Random Reviews
Race
Almost Famous
Dreams (2002)
Supari
Khullam Khulla Pyaar Karenge
more
Bangaru Babu
I Hate Luv Storys
Chala Mussaddi Office Office
Batman 3 - The Dark Knight R...
Bajatey Raho
Kochadaiyaan - The Legend (3...
Singham 123
Rogue One: A Star Wars Story
Krishnarjuna Yuddham
Frozen 2 (Telugu)
SEARCH MOVIES
Dissatisfied with the results? Report a problem or error, or add a listing.
ADVERTISEMENT
SHOUTBOX!
{{todo.name}}
{{todo.date}}
[
ip{{todo.ip}}
]
{{ todo.summary }}... expand »
{{ todo.text }} « collapse
First  |  Prev  |   1   2  3  {{current_page-1}}  {{current_page}}  {{current_page+1}}  {{last_page-2}}  {{last_page-1}}  {{last_page}}   |  Next  |  Last
{{todos[0].name}}

ADVERTISEMENT
This page was tagged for
aadavari matalaku ardhale verule fullhyd
Venkatesh adavari matalaku ardhale MP4 songs
advare matalaku ardla varuls foll move
adavari mataluku climax seen
Adavari Matalaku Ardhale Verule telugu movie
Follow @fullhyderabad
Follow fullhyd.com on
About Hyderabad
The Hyderabad Community
Improve fullhyd.com
More
Our Other Local Guides
Our other sites
© Copyright 1999-2009 LRR Technologies (Hyderabad), Pvt Ltd. All rights reserved. fullhyd, fullhyderabad, Welcome To The Neighbourhood are trademarks of LRR Technologies (Hyderabad) Pvt Ltd. The textual, graphic, audio and audiovisual material in this site is protected by copyright law. You may not copy, distribute, or use this material except as necessary for your personal, non-commercial use. Any trademarks are the properties of their respective owners. More on Hyderabad, India. Jobs in Hyderabad.