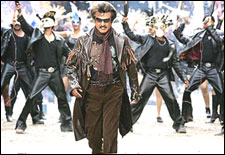 Ravi Mundoli / fullhyd.com
EDITOR RATING
6.0
Performances
Script
Music/Soundtrack
Visuals
NA
NA
NA
NA
Suggestions
Can watch again
NA
Good for kids
NA
Good for dates
NA
Wait for OTT
NA
To watch a Rajini starrer on the first day, you need to be an Olympic decathlete. You have to squeeze in through the metal detectors, nimbly avoid the sniffer dogs, jostle through the crowd, hop over all the cabling laid out by the TV crews, and stagger into your seat. But if you're a true Rajini fan, you can do this blindfolded on one leg.

Sivaji (Rajini) returns from the US where he has amassed Rs. 200 crores as a software systems architect. He returns with the burning desire to spend his time and money on helping the public. Yes, an unavoidable by-product of being a Shankar hero is to do unto society what a detergent does unto stained clothes in TV ads.

Along with his pal Sundaram (Vivek), he jumps through hoops to set up universities and hospitals, but is thwarted by Adiseshu (Suman) and his politician buddies who are worried, mostly because they have to face Rajinikanth with the masses behind him. This is probably a delicate hint to Tamil Nadu politicians, with about the same level of delicacy as an elephant backing into a crockery shop.

Eventually Adiseshu succeeds, and at the interval leaves Sivaji with a Re. 1 coin (played by a Re. 1 coin) in his hand, and leaves the audience atremble with thoughts of our hero's retaliation.

The storyline isn't terribly inventive or engaging. Good rich man wants to do good, bad rich man wants to stop him, and oh, by the way, there's a girl involved. What is different, of course, is that this is Rajinikanth. You put him in a movie, and you've suddenly created a parallel universe to which earthly logic, aesthetics and reasoning don't have a visa.

Truth be told, this is an older Rajinikanth - one whose cheeks are a bit fuller and steps are a bit slower. This is visible in the first half of Sivaji. However, that is entirely beside the point, because he is still inimitable at what he does best. There are a couple of trademark gestures with the coin and with chewing gum that will join the pantheon of Rajini mannerisms.

A couple of other aspects of Sivaji are noteworthy. After a long time, the dubbing from Tamil to Telugu seems to really work, and because of this, the comedy track is more than adequate most of the time, and surreally good at others. For example, a scene where two goons who are helping in a small surgical procedure clink saline bottle and blood packet and go 'Cheers'. As Sivaji keeps saying, 'Cool'!

Since it's such a big release in AP, care has been taken to 'localize' as much of the movie as possible. This is carried so far as to shoot 3 small 'tribute' songs to legends of Tollywood cinema with Rajini and Shriya standing in for their Tollywood counterparts, that will have AP audiences clapping and hooting in the aisles.

For the connoisseur, Sivaji is replete with references to Rajini's life and career. Starting from the fact that the very movie is named after Rajinikanth's real name, to the references that Adiseshu makes about Sivaji having to take up a bus conductor's job, there seems to be subtext after subtext throughout Sivaji.

The music is good, though not the same kind of stuff that Rahman could do in his heyday. A couple of the song picturizations are completely over the top, as are the action sequences, but please refer to our earlier comments about parallel universes etc. By the way, Shriya appears in most of the songs and some other scenes too.

In the final analysis, Sivaji is the archetypal Rajini movie, with all the expected ingredients. If you're a Rajini fan, don't miss it for anything in the world. If you understand Tamil, you'll probably want to see it in the original as well! Even otherwise, you can get to see a decent movie with a tight storyline and good to excellent production values.

Rest of the movie is plain crap and totally devoid of logic or story.

Rajni is a great actor though, I wonder if we will ever get to see him in a serious, sensible and mellowed down role. I think he and even chiru needs to go the amitabh way in chosing roles.
RATING
2
Chalam on 20th Jun 2007, 10:19am | Permalink
Our Mr. Mundoli seems to be a big time fan too and I bet he must have seen it in Tamil as well (even if he doesn't understand it..)

No offense to Ravi here..the point I am trying to make is, that was a pain in the ass movie with absolutely nothing in it and you guys give it 2.5(playing safe as usual)..well, you can say production values, songs picturization, "THE RAJANI" ingredients, blah-blah-blah..the fact is poor direction and screenplay. The reason to a great extent is the same as above..the movie has too much focus on Rajani that everything else was totally neglected. As an example, one particular scene that was poorly written and directed is when suman gets arrested and Rajani taunts him..lol..haha..suman says after Rajani mocks him that Rajani shouldn't have said all that stuff as he(suman) is SENSITIVE (what?)..haha.." its not a freaking love story..he is supposed to be a ferocious villain. Having said that, I don't think suman is a miscast, its just that he was poorly handled.

Well, thanks to Shriya Shravan for being a reason of relief ( oh..with her beauty and with her acting for pete's sake) and a kilo thanks to Vivek for being there in the movie.
Good comedy.

As per Reddy's comments below, I agree it's like that but I still enjoy those movies psychotically speaking..not this one..naah..

ADVERTISEMENT
This page was tagged for
the sivaji: the boss movie
sivaji: the boss movie
sivaji the boss telugu hd movie
shivaji the boss watch online telugu
sivaji the boss telugu movie online movierulz
Follow @fullhyderabad
Follow fullhyd.com on
About Hyderabad
The Hyderabad Community
Improve fullhyd.com
More
Our Other Local Guides
Our other sites
© Copyright 1999-2009 LRR Technologies (Hyderabad), Pvt Ltd. All rights reserved. fullhyd, fullhyderabad, Welcome To The Neighbourhood are trademarks of LRR Technologies (Hyderabad) Pvt Ltd. The textual, graphic, audio and audiovisual material in this site is protected by copyright law. You may not copy, distribute, or use this material except as necessary for your personal, non-commercial use. Any trademarks are the properties of their respective owners. More on Hyderabad, India. Jobs in Hyderabad.