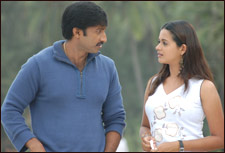 Or maybe we do. Maybe we just don't want you to go to a movie that will mess up your head for no rhyme or reason, when all you wanted was 2 hours of entertainment.

Indeed, there's such a thing as time and space. Yes, there have been tragedies in Telugu that were hits. The question to ask is, when was the last one. It's a whole new generation now. And coming to space, it's adventurous to assume that there's enough of an elite market in Tollywood that will look beyond the standard ingredients of cast, comedy, violence, romance and song & dance, and appreciate movies with harsh scripts. It's okay trying that in Bollywood, since even a small percentage there that can appreciate a Black makes up a big number. Out here, even K Vishwanath doesn't find enough of a market now, even when he puts Chiranjeevi in the lead.

Ontari is the story of Vamsi (Gopichand), a happy-go-lucky youngster who falls in love with Bujji (Bhuvana), an orphan staying alone. When Pandu (Ajay), a ruthless goon and brother of dreaded underlord Lal Mahankali (Ashish Vidyarthi), tries to molest her, he skunks him badly. That wins Bujji's love, but not Mahankali's, who swears devastating revenge.

While Vamsi, the typical Tollywood superhero, protects Bujji again once by bashing up a dozen armed goons with Herculean builds, Mahankali does manage to kidnap her the next time. All's not well after that.

Unrequited love is a powerful emotion, and denial can cause the mind to react in incredible ways. The question is, do you want to see that elaborately on screen. There was no need for the film to change tack randomly in the end, for it was doing a fairly decent job till then of being a mass movie.

The film also has too many Tollywood clichés, including standard dialogues assessing the hero as a tiger or a real man, a highly unrealistic sidekick to the villian who criticizes him in earshot (played usually by Krishna Bhagawan or, as in here, Raghubabu), and a police officer letting the hero escape asking him to take his revenge against the brutes who the system cannot handle (featured with such incredibly trite dialogues here, you can actually see Sayaji Shinde give up trying to put effort into them).

The script is in general tardy - with scenes like Bujji signing on Vamsi's chest and that entire courtship in general - and the climax fight is agonizingly unrealistic. How lousy the climax fight is in Tollywood is usually directly proportional to how big the hero is, and this one seems to want to fast-forward Gopichand into the A-list by making him single-handedly beat up an entire sword-wielding army.

Gopichand's weaknesses with comedy are still intact, especially the grin - it is in general his build rather than great expression that makes his movies work. Bhuvana is a good find - she is cute and expressive, and thankfully, doesn't need to show too much skin in this film. The other performances are all what you expect, with Ali's Sivaji imitation and a Neralu Ghoralu scene in ETV highlighting the comedy. The music by Mani Sharma is one of those tracks that will click only if the film itself does, which looks pretty unlikely.

Ontari has nothing much going for it except zero competition for a while. You shouldn't really be, either
Share. Save. Connect.
Tweet
ONTARI SNAPSHOT

See Ontari full details
ONTARI USER REVIEWS
1 - 3 OF 3 COMMENTS
POSITIVE  |  NEGATIVE |  NEWEST  |  OLDEST  |  MOST HELPFUL  |  LEAST HELPFUL
USER RATING
6.5
48 USERS
Performances
Script
Music/Soundtrack
Visuals
4.5
3.0
3.0
2.5
Can watch again - NA
Good for kids - NA
Good for dates - NA
Wait for OTT - NA
Gmk on 3rd Mar 2008, 9:28am | Permalink
What a really bad review. I thought the movie was great. It keeps up the suspence as to why hero chases the villain, what happened to the "Ninne Pelladutha" kind of family he has. It starts off cliched, but raises the tempo quite a bit and becomes a very good movie by the end. I think fullhyd is worsening by day in its ability to judge movies.
These reviews become soo cliched, it looks like a copy pasteof the punchlines from few of previous reviews.
Seriously, you guys were genuinely funny and authentic once.

ADVERTISEMENT
This page was tagged for
Ontari telugu movie
Ontari reviews
release date
Gopichand, Bhuvana
theatres list
Follow @fullhyderabad
Follow fullhyd.com on
About Hyderabad
The Hyderabad Community
Improve fullhyd.com
More
Our Other Local Guides
Our other sites
© Copyright 1999-2009 LRR Technologies (Hyderabad), Pvt Ltd. All rights reserved. fullhyd, fullhyderabad, Welcome To The Neighbourhood are trademarks of LRR Technologies (Hyderabad) Pvt Ltd. The textual, graphic, audio and audiovisual material in this site is protected by copyright law. You may not copy, distribute, or use this material except as necessary for your personal, non-commercial use. Any trademarks are the properties of their respective owners. More on Hyderabad, India. Jobs in Hyderabad.