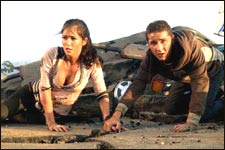 Of course, when stories and plots and logic and similar such party-poopers aren't there to pull us down, it's a rather fun ride. Apart from an irritating tinnitus of Pentagon-Pentagon-Pentagon in your ear - and all the applesauce about the fate of human race - the movie is pretty shamelessly lightweight.

There are times when the Autobots confer with each other about how the human race is young but shows promise, or when they solemnly condole the death of their brave comrade - times when you are reminded of a 5-year-old kid trying gravely to mimic his dad - but otherwise the Autobots slip away gaily into cheerful mayhem. They turn into zippy cars and large fiery trucks, pee on offending humans, speak in urban slang, and one of them even does a mean break-dance.

Once they begin buffooning around, there is no stopping them. Imagine half-a-dozen stooges in the guise of complex, giant robots, bumbling around, hiding in people's backyards while they are not saving the world - they'll tickly you silly.

Shia LaBeouf as Sam Witwicki comes back in a repeat of his role in Disturbia - that of a pheromone-driven, hyperactive teen, his nose helplessly on the trail of tanned bombshells in the neighborhood (Megan Fox as Mikaela). His antics are riveting as he zips through the movie, dribbling along Mikaela in her form-fitting, cleavage enhancing outfits, while helping the bots save the human race.

Undoubtedly, the funniest takeaway from the movie is Sector Seven - the mysterious, Secret-Service-like undercover organization that discovers the first Decepticon to land on earth, and hides it in its basement - under the Hoover dam. Funnier still is Agent Simmons (John Turturro) who wears Sector Seven underwear that has a Superman kind of logo and flashes his "Do whatever I want and get away with it" badge in the face of every kind of trouble.

They weave acronyms (NBA for non-biological aliens) on the fly, dealing as they are with diabolical robotic species. And in the end, they face a humiliating defeat at the hands of the more powerful US Army and Air Force which takes over once it discovers their crackpot endeavors under the dam.

That's about all the 'facts' you need to get you through The Transformers, but if you still insist on a story, well, here is what the scriptwriters throw at you. On a planet far far away called Cybertron, live two species of shape changing robots - Autobots and Decepticons. These robots ain't anything like our own homegrown rickety Asimo, mind you - each is as elaborate and bulky as a Venetian chandelier.

Autobots have a preference for turning into cars (mostly swanky, but sometimes 'piece of crap' Camaros). Decepticons fancy turning into more evil-looking critters - scorpions and other multi-legged, shrieky-voiced creatures.

The two species fall out in trying to own a powerful, energy-emitting 'cube', and leave their destroyed planet in hot pursuit of it as it floats around in space, finally finding its way to earth. Waiting on earth are Sam Witwicki and his car-mechanic friend Mikaela (she fixes car engines since she cannot just be a dumb bombshell), who then chaperone them around to victory over Decepticons and the threat they obviously pose to the human race.

Makes no sense? Well, it was never supposed to. Just let loose the non-judgemental, gizmo-loving, schoolboy inside you, and bumble along with the movie. You will find out soon enough that superficialities like stories and plots don't always make blockbusters. Giant buffooning robots and hormone-numbed teenagers can make good substitutes.
Share. Save. Connect.
Tweet
THE TRANSFORMERS SNAPSHOT

See The Transformers full details
THE TRANSFORMERS USER REVIEWS
1 - 4 OF 4 COMMENTS
POSITIVE  |  NEGATIVE |  NEWEST  |  OLDEST  |  MOST HELPFUL  |  LEAST HELPFUL
USER RATING
8.4
60 USERS
Performances
Script
Music/Soundtrack
Visuals
NA
NA
NA
NA
Can watch again - NA
Good for kids - NA
Good for dates - NA
Wait for OTT - NA
Itsme Again on 29th Aug 2007, 10:45pm | Permalink
appreciate the review by priyanka. it is unbiased. truly.
RATING
8
Hyderabadi In NewZealand on 26th Aug 2007, 2:25pm | Permalink
Priyanka Pulla...undoubtedly this is the worst of all the reviews you have done to date (yeah, ive read them all) and im apalled by your shoddy write-up and sarcasm. Personally, i thought Transformers was a good movie, but to really appreciate it you ought to have followed the cartoon.

I cant believe you completely sidelined the amazing special effects! If only you had mentioned those involving Optimus Prime, Bumblebee, Starscream, Bonecrusher and Megatron....

For me the point of the movie was a trip back memory lane to my childhood and that's all that matters.

RATING
8
Rahul on 25th Aug 2007, 11:37pm | Permalink
You can call it mindless - but its AN ORIGINAL US BRED IDEA!!! Its a great special FX movie that sticks to the cartoon to the T. If you have not grown up watching even one episode of this show - you have no reason to even watch (nor enjoy) the movie... go watch Partner and Hey Baby instead!
RATING
8
Kris Ray on 21st Aug 2007, 10:06am | Permalink
Yeah... I agree with the reviewer. We are sick of these mindless movies with gluttony of aliens waging war against earth and only Americans (who have exhibited their IQ levels by electing someone like Bush, not once, but twice) as saving grace for human race (sic). These movies treat the audience as dumb and idiots. Pl. give us a break.
Don
RATING
2
LEAVE A COMMENT
fullhyd.com has 700,000+ monthly visits. Tell Hyderabad what you feel about The Transformers!
MORE MOVIES
Latest Reviews
Jayeshbhai Jordaar
Sarkaru Vaari Paata
Doctor Strange In The Multiv...
Ashoka Vanamlo Arjuna Kalyan...
Runway 34
more
Heropanti 2
Acharya
Kanmani Rambo Khatija
Jersey (Hindi)
K.G.F. Chapter 2
Beast (Telugu)
Ghani
Fantastic Beasts: The Secret...
The Contractor
The Lost City
Contemporary Reviews
Pellaindi Kaani
Shoot 'Em Up
Pournami
The Bourne Ultimatum
Rakhi
more
Happy Days
Dhol
Lakshyam
Adavari Matalaku Ardhale Ver...
Spiderman 3
Heyy Babyy
Next
Johnny Gaddaar
Adavi Ramudu
Random Reviews
D-War
College
Collateral Damage (English)
Khiladi 420
Morning Raga
more
The Strangers
Bheemili Kabaddi Jattu
The Rise Of The Planet Of Th...
Kya Super Kool Hain Hum
Issaq
Broker 2
Jurassic World (3D)
Collateral Beauty
Mercury (Hindi)
Arjun Suravaram
SEARCH MOVIES
Dissatisfied with the results? Report a problem or error, or add a listing.
ADVERTISEMENT
SHOUTBOX!
{{todo.name}}
{{todo.date}}
[
ip{{todo.ip}}
]
{{ todo.summary }}... expand »
{{ todo.text }} « collapse
First  |  Prev  |   1   2  3  {{current_page-1}}  {{current_page}}  {{current_page+1}}  {{last_page-2}}  {{last_page-1}}  {{last_page}}   |  Next  |  Last
{{todos[0].name}}

ADVERTISEMENT
This page was tagged for
The Transformers english movie
The Transformers reviews
release date
Shia LaBeouf, Megan Fox
theatres list
Follow @fullhyderabad
Follow fullhyd.com on
About Hyderabad
The Hyderabad Community
Improve fullhyd.com
More
Our Other Local Guides
Our other sites
© Copyright 1999-2009 LRR Technologies (Hyderabad), Pvt Ltd. All rights reserved. fullhyd, fullhyderabad, Welcome To The Neighbourhood are trademarks of LRR Technologies (Hyderabad) Pvt Ltd. The textual, graphic, audio and audiovisual material in this site is protected by copyright law. You may not copy, distribute, or use this material except as necessary for your personal, non-commercial use. Any trademarks are the properties of their respective owners. More on Hyderabad, India. Jobs in Hyderabad.