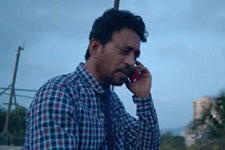 Prerna Prakash / fullhyd.com
EDITOR RATING
5.0
Performances
Script
Music/Soundtrack
Visuals
6.0
4.0
5.0
5.0
Suggestions
Can watch again
No
Good for kids
No
Good for dates
No
Wait to rent it
Yes
Dark comedies are not very easy to execute, and harder to keep up with. With Blackmail, his tragicomedy with a generous dose of dark humour, director Abhinay Deo has brought to the audiences a pill that can be swallowed very easily but has a lasting impact. The lessons in the story are bitter, the action is riveting, and the acting is admirable.

The story follows a simple, "average" man, Dev (Irrfan Khan), who is stuck in a rut in his marriage. He stays late in the office, and shows all the signs of being another common man stuck in a nine-to-six job and an unhappy marriage. In a bid to surprise his wife Reena (Kirti Kulhari), he comes back home earlier than usual one day, and finds his wife with an old lover of hers.

Instead of committing the crime of passion that he envisions in his head, he instead decides to extort money out of the lover so that he can manage the finances in his home while getting some payback at the same time. Dev has huge EMIs and expenses all around, and now he has a plan to settle scores.

However, what starts as a simple game of blackmail rapidly gathers momentum, with more players getting involved and the plot inevitably thickening. The story unravels perfectly for the film to dissect the human psyche, our behavioural patterns, and the inescapable reality of death. While the story takes quite some time to set up the dominoes, the second half of the movie is all about the chips falling and gaining momentum, until the last domino - suddenly, predictably and startlingly - falls.

There are many little intricacies in the movie that might get lost in the rich, undulating tapestry of murder, extortion and criminal intent, but these are the little things that deserve to be noticed and applauded. For example, the desperation of the lonely man who is secretly irreverent and rebellious to authority is portrayed perfectly in the character of Dev, who - outwardly - is a perfect employee, a good husband, and a staunchly average citizen of the country, but has a darker side, like almost all human beings.

However, while the film starts off with a lot of promise, it loses steam somewhere in the middle, and by the end of it, has to kill off a few characters just to make the plot comprehensive. The trope of the unhappy marriage and the consequent affair that the film starts off with is well-portrayed, but only until a certain point. As Irrfan's blackmail attempt goes awry, so does the whole plot. After a point, it feels like the movie is adding extra characters just to keep it going. There are a couple of sub-plots that are wholly unnecessary, and the screenplay could have definitely been tighter and smarter.

The movie also leaves you with a few questions - for instance, how Dev's marriage turned so sour - that are left unanswered.

Two things that give the film legitimacy are the acting and the music. Khan is the master of sardonic humour, and rules the film with his witty dialogues delivered with a deadpan expression. He is a pastmaster of the art of nonchalance, and his acting hits all the right spots. A good example of his acting (and a serious tip of the hat to the camerawork) would be the scene where he finds out about his wife's affair. His face is a perfect representation of a man going through shock and betrayal, with anger, sorrow, heartbreak and resignation flashing across his face in a matter of seconds.

Even though Khan far surpasses the rest of the cast with his brilliantly muted portrayal of a common married man, the others contribute in no small measure with their solid expressions, comic timing and generally competent performances. After Khan, the characters that command the most attention onscreen are Reena's lover Ranjit Arora (Arunoday Singh), and his smart, rich, alcoholic wife Dolly (Divya Dutta). Singh does a great job as the jacked up, beefy and slightly dumb gym guy with no plans and no occupation. He is a priceless foil to Khan's wily ideas, and his comic timing is brilliant. Dutta is equally impressive at playing the rich and smart wife who, while providing for her husband, does not leave any opportunity to make sure that he knows his place in the household.

Kirti Kulkarni's Reena is quite lacklustre and a little annoying, but the character itself does not give her much to work with. The limited screen time and few dialogues offer her little scope to stand out. In fact, all of Deo's female characters are empowered, yet they get very limited screen time. Though most of them are packaged and presented with much drama and promise, they amount to little. Time has been spent on what they will look like, and how that look will be shot, but then they are given nothing of essence.

The camera tilts and the whimsy cuts lend zest to the rather mundane proceedings on screen. The music is fun and hip, and reels you in with its interesting quirks. The songs are not forgettable or the usual. However, the whole essence of the film get a jarring slap in the face because of the completely unnecessary and unappealing item number with Urmila Matondkar. It feels like that number is there just for the sake of having one, as it is also pretty poorly executed.

On the whole, Blackmail makes you wonder if Abhinay Deo actually had a fully-formed plot and story, or just a half-baked idea that he directed to perfection with dark frames and dark humour and passed off as a film. It is certainly not a patch on his previous attempt at the genre, Delhi Belly.
Share. Save. Connect.
Tweet
BLACKMAIL (2018) SNAPSHOT 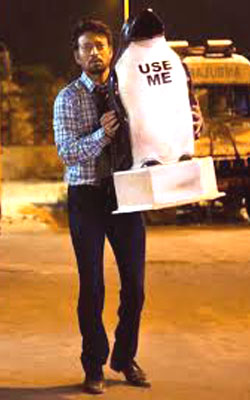 ADVERTISEMENT
This page was tagged for
Blackmail (2018) hindi movie
Blackmail (2018) reviews
release date
Irrfan Khan, Kirti Kulhari
theatres list
Follow @fullhyderabad
Follow fullhyd.com on
About Hyderabad
The Hyderabad Community
Improve fullhyd.com
More
Our Other Local Guides
Our other sites
© Copyright 1999-2009 LRR Technologies (Hyderabad), Pvt Ltd. All rights reserved. fullhyd, fullhyderabad, Welcome To The Neighbourhood are trademarks of LRR Technologies (Hyderabad) Pvt Ltd. The textual, graphic, audio and audiovisual material in this site is protected by copyright law. You may not copy, distribute, or use this material except as necessary for your personal, non-commercial use. Any trademarks are the properties of their respective owners. More on Hyderabad, India. Jobs in Hyderabad.