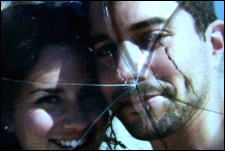 This isn't a bad film - not at all. In fact it is a quite well-made film, though constrained by its small budget and scope, and, frankly, pretty scary. It's relentlessly scary almost, and I mean that in a good way. This film is understated in its scariness, too - none of the mad CGI and lots of money on fancy colour treatments that are standard for all horror films these days. This is resolutely a small-budget, small-scale film with scare borne out of genuine atmosphere and sparse soundtrack.

Part of the reason it works so well in this setup is the way they chose to shoot it, and made it intrinsic to the plot. The story centers around a young couple, the girl of which has been facing some abnormal goings-on since she was a kid. The boyfriend buys a video camera in hopes of catching whatever it is that is troubling her. Much of the film is shot using this camera, and that makes it that much more immediate.

Comparisons to Blair Witch Project are obvious and immediate, but Paranormal stands on its own simply because Oren Peli is not interested in milking sub-par equipment, shaky hands and funky malfunctions for scares. Instead he keeps things claustrophobic and yet fairly clearly weird. Another smart decision was to keep the personal tension alive by interspersing these activities with character interaction that drives the plot forward.

Katie (Featherston) is actually quite a sympathetic character with a lot to like. You are invested in what she is going through, and are fairly inclined to root for her. The boyfriend, Micah (Sloat), is actually more real, though less sympathetic. His character feels intensely threatened by something he can't see or control, and lashes out increasingly, all the while obsessed with this footage.

Peli has got a sense of honest-to-goodness pacing, and he employs that to take his scares forward. For such a small film with a strong â€œBoo!â€ factor, that is quite refreshing. The editing is sharp, and the film only lags for a bit before picking right up with a well-timed nightly scare.

The ending, however, is a cheap shot, and feels out of place with a well-meditated film. It feels like something tacked on in the end when a real denouement could not be discerned. It isn't that it isn't scary - it just robs the film of its well-done sense of balance.

It is probably worth mentioning that what constrains this movie is its strength - the independent spirit. The smallness of the cast and the conceit work greatly to make a neat little horror film, but you can't shake off the feeling that this is a twee little film pretending to be a real one. While it is very much a real film, and scary in its own right, there is a sense of limitation to the story and the way it unfolds.

In a large hall this then turns into a movie whose scare quotient is directly proportional to how lonely you feel in an auditorium full of people. This is not a Drag Me To Hell, revelling in the collective consciousness, but a more personally disturbing film, begging to be let loose upon you while you are alone and scared.

I find it hard to recommend a movie whole-heartedly if your enjoyment of it hinges on how you watch it, and yet this is a neatly done independent film that works on almost all levels. It's a bleak little scary movie that will probably end up disturbing you for the day, and just for that it gets a free pass in my book.
Share. Save. Connect.
Tweet
PARANORMAL ACTIVITY SNAPSHOT

ADVERTISEMENT
This page was tagged for
Paranormal Activity english movie
Paranormal Activity reviews
release date
Katie Featherston, Micah Sloat
theatres list
Follow @fullhyderabad
Follow fullhyd.com on
About Hyderabad
The Hyderabad Community
Improve fullhyd.com
More
Our Other Local Guides
Our other sites
© Copyright 1999-2009 LRR Technologies (Hyderabad), Pvt Ltd. All rights reserved. fullhyd, fullhyderabad, Welcome To The Neighbourhood are trademarks of LRR Technologies (Hyderabad) Pvt Ltd. The textual, graphic, audio and audiovisual material in this site is protected by copyright law. You may not copy, distribute, or use this material except as necessary for your personal, non-commercial use. Any trademarks are the properties of their respective owners. More on Hyderabad, India. Jobs in Hyderabad.