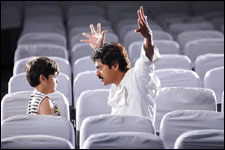 Deepa Garimella / fullhyd.com
EDITOR RATING
4.5
Performances
Script
Music/Soundtrack
Visuals
7.0
4.5
5.5
6.5
Suggestions
Can watch again
No
Good for kids
No
Good for dates
No
Wait to rent it
Yes
It is not uncommon to see a man completely weakened, wan and tired after he's been through a blood donation. And if it is his blood that was donated, it is even justified. However, Chiranjeevi (Jagapathi Babu) is a man of substance - he donates his blood 5 times in a single day to 5 different hospitals, and the next day donates some to his son, after which he attends the physical examination of the Home Guards in the running race of which he misses the finish line by exactly 3 inches.

Maa Nanna Chiranjeevi is the story of one man's efforts to move heaven and earth so his son can get a decent life. That, and the fact that it looks inspired by The Pursuit Of Happyness and Ta Ra Rum Pum make sure that theatres are irrigated with tears no less than the volume of the Bay Of Bengal.

It all starts in Razole, where the illiterate Chiranjeevi is the richest man around. After he gets married, his well-educated wife, who's a career woman, doesn't respect him or his riches. She invests in stocks, software, prawns, real estate, and everything except a course in acting. On top of it, she's rude to him, and accuses him of not earning enough to keep the family going, and finally, dumps him for a job elsewhere.

Chiranjeevi then takes his son (Master Atulith) to Hyderabad, where he wants to get him admitted to the finest school in town, but its fees are high enough to buy the whole of Italy. After being swindled out of his last paisa by a cheat called Rohit (Jayaprakash Reddy), however, they're in utter poverty.

So they eat in random places, bathe in random places, and once, sleep inside a railway station restroom. Later in the flick, they sleep inside an empty movie theatre. Not because it is screening this movie, but because they have nowhere else to go. Throughout the movie, Chiranjeevi never tells his child they're poor, and keeps him thinking that this is all part of a criminal pursuit because Chiranjeevi is an undercover CID.

Chiranjeevi scrimps and scrounges for 20 hours a day for the rest of the month, all the while preparing for the Home Guards entrance examination, and on the last day, donates his blood for the money. But then, some goons beat him up and rob him of all his hard-earned money. The next day, his son has an accident in which he might lose his eyesight. Chiranjeevi now needs money desperately, but not as desperately as he needs to end this flick. He quickly goes and beats up the thugs who robbed him, gets his son treated, gets recruited into the Home Guards service, re-unites with his wife, and calls it curtains.

Maa Nanna Chiranjeevi isn't a bad film. It can be heartwarming, and even inspiring, if watched in the right spirit. However, some overly melodramatic scenes show that the director's main mission is to yank at as many heartstrings as he can, and in the process, get us to yank out as much hair from our heads as we can.

The other problem with the movie is the character of the kid - he is evidently a fairly precocious child, and still actually believes what his father tells him about them both being in a Bond-style story. Otherwise, this tear-jerker seems to be a film targeted at kids, going by the strong presence of the child artiste, the absence of gore and nudity in the movie, and the absence of kids in the theatre.

Jagapathi looks tired and jaded, but pulls off a good performance. Master Atulith is cute and talented as well. M S Narayana, Telangana Sakuntala, Brahmanandam, Ali and a host of others play supporting roles, and they're good. The comedy track, which is inundated with references to other movies, won't make your stomach hurt, but won't make it kick your last meal out either.

There isn't much by way of music, except for a few songs. The last song, picturized on the kid, could have worked well if placed in a real children's movie. The production values are okay.

There are better things to do this New Year, than land up at this one and feel sorry for the protagonist. And if you already have, then feeling sorry for yourself would be a good start.
Share. Save. Connect.
Tweet
MAA NANNA CHIRANJEEVI SNAPSHOT

ADVERTISEMENT
This page was tagged for
Maa Nanna Chiranjeevi telugu movie
Maa Nanna Chiranjeevi reviews
release date
Jagapathi Babu, Neelima
theatres list
Follow @fullhyderabad
Follow fullhyd.com on
About Hyderabad
The Hyderabad Community
Improve fullhyd.com
More
Our Other Local Guides
Our other sites
© Copyright 1999-2009 LRR Technologies (Hyderabad), Pvt Ltd. All rights reserved. fullhyd, fullhyderabad, Welcome To The Neighbourhood are trademarks of LRR Technologies (Hyderabad) Pvt Ltd. The textual, graphic, audio and audiovisual material in this site is protected by copyright law. You may not copy, distribute, or use this material except as necessary for your personal, non-commercial use. Any trademarks are the properties of their respective owners. More on Hyderabad, India. Jobs in Hyderabad.