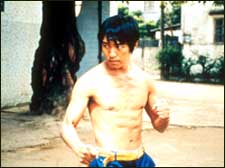 Himabindu Chitta / fullhyd.com
EDITOR RATING
5.0
Performances
Script
Music/Soundtrack
Visuals
NA
NA
NA
NA
Suggestions
Can watch again
NA
Good for kids
NA
Good for dates
NA
Wait to rent it
NA
Whoever gave birth to the ancient art of Kung-Fu could never have imagined that one day it would spawn a torrential genre of cinema with millions of die-hard fans. Kung-Fu Hustle is made from the same mould as the dozens of formulaic martial arts movies that China churns out each year. Now that the Bruce Lees and Jackie Chans have overturned our conventional concept of battle, Stephen Chow gives us his own brand of haiiiiiiii-yah in a movie whose brilliant fight sequences are weighed down neither by philosophy nor gravity. A poor man's Crouching Tiger, if you please.

In life, as in Kung-Fu, there is always a counter strike. And so, a man named 'The Beast' is brought in to deal with these two masters. A splendid game of one-upmanship is unleashed, with both sides trying to outwit the other. When the Beast is about to finish off the masters forever, our erstwhile vagabond Chow steps in and saves them.

Why does he save them? This question stumps the masters, the audience and the director himself, who saves himself the trouble of telling us why. But never mind if the dumdaar plot and strong logic make their absence felt; all we care about is the quality and intensity of the pounding. So we move on to the next twist in the tale.

It turns out that Chow is 'The One,' and he is advised that 'with great power comes great responsibility.' (Ok, so the director wasn't exactly 'fast as lightning' with the screenplay.) We're supposed to understand by these lines that Chow has great Kung-Fu potential which has, until now, been carefully suppressed, so carefully indeed that even Chow is completely unaware of it. But now that the director's given the go-ahead, Chow suddenly reappears minus beard and moustache, equipped with the latest age-old Kung-Fu techniques. Very reminiscent of Neo's fast-forward jujitsu lessons in the Matrix, but what the heck, at least the inspiration's from a good place.

The newly empowered Chow fights the Beast in a stunning climax, complete with the colorfully-named moves such as the Lion's Roar, the Frog's Croak and the Buddhist Palm. Just when it seems that the Beast has bellowed louder than his quarry, Chow pulls off a sizzling re-entry, and has the Beast begging for mercy at his feet. Good kicks evil's butt, Chow gets his girl in the end and everyone's happy.

It's hard to tell if the acting is good, because dialogues and non-action sequences are kept to a bare minimum. But the real meat is in place, and some B-grade comedy is thrown in for effect, though the Chinese still have a long way to go if they want to catch up with even the average innuendo-replete Telugu flick.

The style and charisma of the final Kung-Fu sequence cannot be erased even by the bad memory of the gaping holes in the plot. The English voice-over seems stilted in places but don't pop your popcorn, since the screenplay isn't exactly Oscar material.

Definitely one for the kids, and for martial arts aficionados.
Share. Save. Connect.
Tweet
KUNG-FU HUSTLE SNAPSHOT

ADVERTISEMENT
This page was tagged for
Kung-Fu Hustle english movie
Kung-Fu Hustle reviews
release date
Stephen Chow, Chan Kwok Kwan
theatres list
Follow @fullhyderabad
Follow fullhyd.com on
About Hyderabad
The Hyderabad Community
Improve fullhyd.com
More
Our Other Local Guides
Our other sites
© Copyright 1999-2009 LRR Technologies (Hyderabad), Pvt Ltd. All rights reserved. fullhyd, fullhyderabad, Welcome To The Neighbourhood are trademarks of LRR Technologies (Hyderabad) Pvt Ltd. The textual, graphic, audio and audiovisual material in this site is protected by copyright law. You may not copy, distribute, or use this material except as necessary for your personal, non-commercial use. Any trademarks are the properties of their respective owners. More on Hyderabad, India. Jobs in Hyderabad.