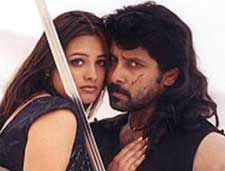 Deepa Menon / fullhyd.com
EDITOR RATING
3.0
Performances
Script
Music/Soundtrack
Visuals
NA
NA
NA
NA
Suggestions
Can watch again
NA
Good for kids
NA
Good for dates
NA
Wait for OTT
NA
From our Tamilian cousins and their fertile imagination comes Samurai, a tale of tall delusions. This is far from being the best that they can do. But it was a hit, nonetheless. And in the tradition of all hits, this one also pushes its luck with the dubbed version. It can safely be said that whatever charm this movie possessed in its original form is lost almost entirely in translation.

A band of unsmiling collegians stun a national media and audience when they kidnap six prominent politicians and bureaucrats from under the police's watchful eyes. The list of hostages reads like the welcome committee to Hell's crime department. All of them, including a random Laloo Prasad Yadav-lookalike, have charge sheets longer than the forlorn Secretariat flyover. The Supreme Court summons them but none are able to attend as they suddenly acquire various illnesses that require complete bedrest and strict abstinence from being hanged to death.

And make no mistake, they deserve to die. Vikram, our hero, establishes that. These slimebuckets sell adulterated drugs, misuse political clout to quench personal vendettas, and order the killing of innocent, not to mention, endangered deer, for their lavish dinners. Vikram and his friends, trained hard deep in a rain-soaked jungle, smuggle these thugs to their hideout and the police is stumped. The only trace the kidnappers leave is the occasional sample of muscle tissue that gets caught and torn on errant bits of nail. And to think, they went through so much trouble trying to avoid finger-prints.

The first one to notice the meaty evidence is the local DCP, Nassar, an honest man in the service of rogues. But he's unable to real get a lead on the gang, till he runs into Vikram at more than one crime scene and makes the connection. By then, his school-girl daughter is already moony-eyed over the outcast and wants to know all about what makes him ticked off.

Like many of us, the hero was once a younger person. He and his friends at medical school aimed to study well and get the hell out of there, but Jayaseal was different. Not only did she care deeply about her patients, she also reacted violently to any kind of injustice. When she finds out that the hospital she works at is using adulterated medicines, she loses her earlier poise and whips up a storm. Well, she tries to anyway.

Unfortunately, Jayaseal comes up against a wall of indifference from her friends. Disheartened and more than slightly unhinged at this point, she takes into her head to convince one of them to be a warrior, to rise up like a samurai. Towards this end, she sets herself on fire. Why she had to self-immolate to make a point is not clear. But hey, it works. Vikram promises his dying sweetheart that he will be her samurai, band with his mates and fight against corruption.

The movie ends on a note of Utopian satisfaction. It is everything you imagine a revolutionary tale to be: violent, thrilling and joyously out of touch with reality. Although well-shot and cast very effectively, Samurai is only for those times when you're in the mood for righteous raves and blood-pumping slogans.

ADVERTISEMENT
This page was tagged for
samurai full movie in telugu
Samurai telugu
samurai telugu movie
SAMURAI FULL TELUGU MOVIES
Samurai telugu movie
Follow @fullhyderabad
Follow fullhyd.com on
About Hyderabad
The Hyderabad Community
Improve fullhyd.com
More
Our Other Local Guides
Our other sites
© Copyright 1999-2009 LRR Technologies (Hyderabad), Pvt Ltd. All rights reserved. fullhyd, fullhyderabad, Welcome To The Neighbourhood are trademarks of LRR Technologies (Hyderabad) Pvt Ltd. The textual, graphic, audio and audiovisual material in this site is protected by copyright law. You may not copy, distribute, or use this material except as necessary for your personal, non-commercial use. Any trademarks are the properties of their respective owners. More on Hyderabad, India. Jobs in Hyderabad.