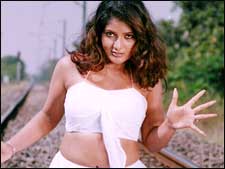 It seems in a land far, far away (not far enough though), there was a college where it was against the rules not to be retarded. You have to at least look retarded. Under such trying circumstances, our hero and heroine try to make their living.

So everybody's happy. But one day the hero realises something. The heroine not only wears the clothes of a four-year-old, but even behaves like one. Like, how cool is that? She can play basketball, and pole dance at the same time. And there are no baskets or poles involved! Wow! How can any guy resist her? So the hero says that he loves her.

To get things cleared up, she decides to pretend to be his wife and sleep with him for a month. Don't think hard. Just keep with the flow. Okay, she doesn't sleep with him, but generally starts living with him.

But the hero realises that after singing and dancing with her on the worst remixes of old Telugu songs ever made, he doesn't want to get married to her. He realises that marrying someone who's older, and who loves somebody else, can be disastrous. Moreover, the songs gave him ample opportunity to do whatever he wanted to. So, he walks away. The end.

Though sounding like a B-grade flick, this one is not for those cheap lechers, skin-show lovers or deperate guys. It is just for decent guys that love to see a hot girl gyrating in her undies. So how decent are you?
Share. Save. Connect.
Tweet
XTRA SNAPSHOT

ADVERTISEMENT
This page was tagged for
xtra telugu movie
Xtra telugu movie
Xtra reviews
release date
Ruthika, Vadde Naveen
Follow @fullhyderabad
Follow fullhyd.com on
About Hyderabad
The Hyderabad Community
Improve fullhyd.com
More
Our Other Local Guides
Our other sites
© Copyright 1999-2009 LRR Technologies (Hyderabad), Pvt Ltd. All rights reserved. fullhyd, fullhyderabad, Welcome To The Neighbourhood are trademarks of LRR Technologies (Hyderabad) Pvt Ltd. The textual, graphic, audio and audiovisual material in this site is protected by copyright law. You may not copy, distribute, or use this material except as necessary for your personal, non-commercial use. Any trademarks are the properties of their respective owners. More on Hyderabad, India. Jobs in Hyderabad.