The Chronicles Of Riddick Review 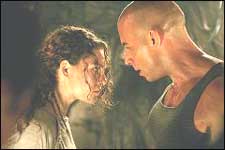 Charisma Murari / fullhyd.com
EDITOR RATING
1.0
Performances
Script
Music/Soundtrack
Visuals
NA
NA
NA
NA
Suggestions
Can watch again
NA
Good for kids
NA
Good for dates
NA
Wait to rent it
NA
Some times, when the trauma becomes too much to bear, the mind just wants to quell all memories associated with it. Believe us, we know, for we just watched The Chronicles Of Riddick. While the ol' brain pleads with us to not relive those moments of absolute anguish, the charitable nature compels us to regurgitate some info - for greater common good, you know.

For a movie that nurses aspirations of creating for itself a niche like the Star Wars, The Chronicles Of Riddick is abysmally disappointing. And that is a compliment. Riddick (from the 2000 release, Pitch Black) still has that built-in night vision, there still is a bounty on his head (and the rest of him), and there still is enough steroid to cure a small country of arthritis.

And we learn an important lesson in sci-fi - just because a sequel can be made doesn't mean it should.

The movie begins with a weird contraption of a space craft chasing Riddick in order to kill him. Riddick, and his brand of smile-less snappy, continues to thrive in a universe that seems to be succumbing, rapidly, to the imperialist Necromongers.

As civilisations lose their souls to the Necros, the grunting anti-hero must save the day. For all the people who like this kinda stuff, this just isn't the kinda stuff they'll like.

And through all the chaos and confusion of blitzkrieg scene-changes, the Oscar Winner Judi Dench (as Aereon) comes along looking ethereal in white, vanishing in and out of the frame. But as you watch this movie, you understand her reluctance to be in.

Thandie Newton plays the ambitious wife of Lord Marshall's second-in-command, goading and egging her husband on to dethroning Marshall. But by now, it is clear that only Riddick can save the universe. And nothing can save this movie.

TCOR includes its share of torture-paraphernalia, gore and claustrophobia-generating movie-sets. But it really has nothing that can be chronicled. It is, in all totality, just noise - incessant, grating on your nerves kind of noise. It has no reason to exist.
Share. Save. Connect.
Tweet
THE CHRONICLES OF RIDDICK SNAPSHOT

ADVERTISEMENT
This page was tagged for
chronicles of riddick full movie
The Chronicles Of Riddick english movie
The Chronicles Of Riddick reviews
release date
Vin Diesel, Colm Feore
Follow @fullhyderabad
Follow fullhyd.com on
About Hyderabad
The Hyderabad Community
Improve fullhyd.com
More
Our Other Local Guides
Our other sites
© Copyright 1999-2009 LRR Technologies (Hyderabad), Pvt Ltd. All rights reserved. fullhyd, fullhyderabad, Welcome To The Neighbourhood are trademarks of LRR Technologies (Hyderabad) Pvt Ltd. The textual, graphic, audio and audiovisual material in this site is protected by copyright law. You may not copy, distribute, or use this material except as necessary for your personal, non-commercial use. Any trademarks are the properties of their respective owners. More on Hyderabad, India. Jobs in Hyderabad.