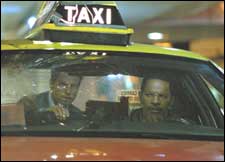 Deepa Menon / fullhyd.com
EDITOR RATING
1.0
Performances
Script
Music/Soundtrack
Visuals
NA
NA
NA
NA
Suggestions
Can watch again
NA
Good for kids
NA
Good for dates
NA
Wait for OTT
NA
Bad movies, of any language, have one thing in common; they all go on for interminably long periods of time. Blame it all on the theory of relativity, but at some point all stinking reels give you that same sense of an unfeeling eternity. You've long since stopped caring about any of the characters, the plot is busy chasing its own sorry tail, and even the actors look drowsy. Leave the popcorn and flee. It's each man to himself.

Collateral is a classic example of a movie that refuses to end. It starts off all right, and then it turns into the date from hell: at first there's promise, then some mandatory chit-chat, some groping about in the dark, till someone says something stupid, uncomfortable silence follows, frigid indifference close on its heels. There's definitely no happily ever after here.

Max (Jamie Foxx) is a cabbie in LA; a nice guy who camouflages his highly strung nature with an almost Zen-like air of capability. He knows his way around the city's streets and prefers to drive at nights. This is how he happens to meet the two people who would turn his whole world on its back.

The first, Annie Farrell (Jada Pinkett Smith), is an attorney gearing up for a big case. There's a connection of sorts between the two and by the time he drops her off, you know they're destined to meet again. Sooner than they think, actually.

Max's next customer is Vincent (Tom Cruise), a suspicious Richard Gere-look alike, who carries a bursting suitcase and has five stops to make. With some persuasion, he gets Max to drive him around town and back to the airport, a decision the cabbie spends the rest of the night regretting.

Vincent is a hired killer, with a list of names from his paymaster. By the time Max catches on, there's a body in the trunk of his car, blood on his windshield and a gun at his head. Driving from one spot to another, the bodies steadily piling up, the duo hold rushed, introspective dialogues that are neither original nor compelling.

The cops get on their trail, but don't interfere by helping in any way. Gunshots fly, pavements blur past, and a pointless, long-drawn encounter takes place, all during which the plot does not make any move that's remotely interesting. You've seen all this before, done much better and with less blah blah. You don't connect at all with any of the characters, except briefly with Max, who also gets buried under the avalanche of yawns towards the end.

Collateral could have been sharper, smarter, and, most importantly, shorter. Instead it takes the long route. With an empty tank and no one in the driver's seat.

ADVERTISEMENT
This page was tagged for
Collateral english movie
Collateral reviews
release date
Tom Cruise, Jamie Foxx
theatres list
Follow @fullhyderabad
Follow fullhyd.com on
About Hyderabad
The Hyderabad Community
Improve fullhyd.com
More
Our Other Local Guides
Our other sites
© Copyright 1999-2009 LRR Technologies (Hyderabad), Pvt Ltd. All rights reserved. fullhyd, fullhyderabad, Welcome To The Neighbourhood are trademarks of LRR Technologies (Hyderabad) Pvt Ltd. The textual, graphic, audio and audiovisual material in this site is protected by copyright law. You may not copy, distribute, or use this material except as necessary for your personal, non-commercial use. Any trademarks are the properties of their respective owners. More on Hyderabad, India. Jobs in Hyderabad.