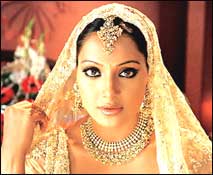 Anupama (Bipasha Basu) is a happy-go-lucky kid, except she isn't exactly happy, and isn't too lucky. Especially in the costume department. She traipses about in things that make her look like something the cat dragged in.

But Arpit doesn't think so. Naa Uh! He pines for her like a 12-year-old who has a crush on his English teacher. And he wastes no time in getting himself engaged to her.

Sure enough, every few minutes we burst into song, and when there comes el rain-songo, a satin bed-sheet clad Anupama heads out to make coffee. On her return one thing's for certain - no one's getting any coffee tonight. At this point, you are left wistfully reminiscing about the good old days when an engagement actually meant something.

With the crowd-pulling customary "steamy" scene over, we can finally get a move on. Soon enough Anupama calls off the wedding with Arpit, calls up Aman, and her mom calls in professional help. Why? Aman does not exist. Outside of Anupama's mind, that is. And with the way she's been acting throughout, you know nothing exists inside it for sure.

Anyway, wrist-slashing, shrill-yelping and something-and-all later, Arpit is still in love with her. While everyone is telling her to get a grip because Aman doesn't exist, Arpit is telling her that he believes her. And then he is forced off to the US for a brief period.

With Arpit gone, the movie becomes scary. Bipasha is not wearing any make-up and the doctors don't realise that that's the reason why she looks so ill. Some kind of twist happens, but you will figure it out yourself - we aren't about to waste any key-strokes on it.

But Bipasha has to be given kudos for having the courage to look really sick and troubled. Not her prettiest best, but definetely up there in professionalism. She's also delivered a good performance. John Abraham goes around looking like a grouch, but he does it so well! And Priyanshu looks like he needs to go easy on the sauce.

Madhoshi achieves one thing for sure - it isn't typically Bollywood. This time when they say "hatke", they are bang on.
Share. Save. Connect.
Tweet
MADHOSHI SNAPSHOT

ADVERTISEMENT
This page was tagged for
madhoshi
Madhoshi hindi movie
Madhoshi reviews
release date
Bipasha Basu, John Abraham
Follow @fullhyderabad
Follow fullhyd.com on
About Hyderabad
The Hyderabad Community
Improve fullhyd.com
More
Our Other Local Guides
Our other sites
© Copyright 1999-2009 LRR Technologies (Hyderabad), Pvt Ltd. All rights reserved. fullhyd, fullhyderabad, Welcome To The Neighbourhood are trademarks of LRR Technologies (Hyderabad) Pvt Ltd. The textual, graphic, audio and audiovisual material in this site is protected by copyright law. You may not copy, distribute, or use this material except as necessary for your personal, non-commercial use. Any trademarks are the properties of their respective owners. More on Hyderabad, India. Jobs in Hyderabad.