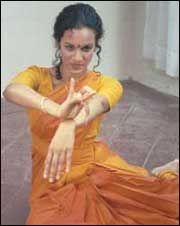 Deepa Menon / fullhyd.com
EDITOR RATING
5.0
Performances
Script
Music/Soundtrack
Visuals
NA
NA
NA
NA
Suggestions
Can watch again
NA
Good for kids
NA
Good for dates
NA
Wait to rent it
NA
Everyone studied their lines. Let there be no questions about that, the lines were studied and the tones were rehearsed and the scenes were painstakingly choreographed. All this makes Dance Like A Man an excellent study of Mahesh Dattani's play, but not much of a screen adaptation. There is such a thing as too much rehearsal.

All your pleasure from watching the movie is likely to come from its plot, not its screenplay or its actors. Depending on where you're standing, Dance Like A Man tells the story of an over-ambitious mother, a man who drowns his happiness in liquor, an only child who can't shake off the stifling expectations, or the forced conspiracy and crippling power of guilt. In short, everything Bollywood carefully filters out when it gives you family drama. Secrets, shame and tangled histories - this is family drama, and this is the reason shrinks live in luxury.

Ratna - we must start with her - was a celebrated dancer. Note the past tense, note the pain it wrings. She is married to Jairaj (Arif Zakaria), a man who missed that Shakespearean tide entirely when he succumbs to the wishes of a willful father and wife and gives up his dream of being a great dancer. Or any kind of dancer. Disillusioned, resentful and resigned, he spends his time dodging his wife's more vicious barbs and drinking himself sane. Their one joy is daughter, Lata, a seemingly untroubled girl who has three dreams to fulfil at her arangetram.

While Ratna goes about pulling all the strings she can reach to make Lata's first public performance a success, she and her husband relive memories centered around their rambling ancestral home. Primarily around the battles won and lost there. Jairaj's father, a social reformer of the Independence era, died believing his son an effete wimp for loving to dance. But as a judge of human fallibility, he did pretty well. Knowing Ratna loved fame more than anything else, and would give up a lot to have it, the father asks her to help him wean Jairaj from dance.

Jairaj quits, like they wanted him to, and he reduces himself to a mere flautist in the background. The power play between the genders is portrayed powerfully, and you think of all the times the story's been told in reverse. And how equally tragic it is for a man to be discriminated against.

As the couple battles their private demons, Lata is trying to figure out whether it's possible for her to separate her parents from the art she loves so well. Her hapless, and overly ingratiating, fiancé (Samir Soni) is witness to the whole messy family drama. His reaction is inadequate, to say the least. Both he and Anoushka Shankar (Lata) seem excessively giggly given the somber texture of the movie.

Shobana plays Ratna with grace, but her limitations as an actor are obvious in the more keenly wrought emotional scenes. Arif Zakaria tends to look rather spaced out, like he's been hypnotized or is sleep-walking. Very strange. We'd say, skip the movie, catch the play.

ADVERTISEMENT
This page was tagged for
arif zakaria dance like a man
Dance Like A Man english movie
Dance Like A Man reviews
release date
Shobana, Arif Zakaria
Follow @fullhyderabad
Follow fullhyd.com on
About Hyderabad
The Hyderabad Community
Improve fullhyd.com
More
Our Other Local Guides
Our other sites
© Copyright 1999-2009 LRR Technologies (Hyderabad), Pvt Ltd. All rights reserved. fullhyd, fullhyderabad, Welcome To The Neighbourhood are trademarks of LRR Technologies (Hyderabad) Pvt Ltd. The textual, graphic, audio and audiovisual material in this site is protected by copyright law. You may not copy, distribute, or use this material except as necessary for your personal, non-commercial use. Any trademarks are the properties of their respective owners. More on Hyderabad, India. Jobs in Hyderabad.