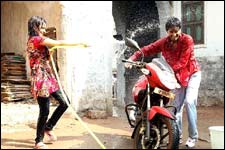 Deepa Garimella / fullhyd.com
EDITOR RATING
3.5
Performances
Script
Music/Soundtrack
Visuals
6.0
2.0
4.0
4.5
Suggestions
Can watch again
No
Good for kids
No
Good for dates
No
Wait to rent it
Yes
Varun (Varun Sandesh) is a loafer whose dad (Tanikella Bharani) keeps lamenting over how complete a wastrel he is. But sometimes Varun does behave like a responsible son - he joins him in the lamenting. Once, he even demands a full apology from his father for bringing him up this way.

In response, his father gives him a fat wad of cash, with which Varun promptly buys the fastest bike in town. Like all teenagers with a cool new bike, he goes squandering away precious hours of his promising life - which, unfortunately, is what the audiences are doing, too.

Anyway, thanks to his new steed, Varun gets a job. What's more, the girl he's been ogling at for 2 years, Hema (Neha Sharma), becomes his girlfriend. However, trouble is round the corner. One night Varun is cavorting with Hema, and does not notice that a lot of atrocious things are happening - a man is getting murdered, his bike is getting stolen, and the audiences are beginning to wake up because of all those songs. Behind all these happenings are some sociopaths whose main business is to settle scores between other people by using torture, violence, and horrendous hairstyles.

Varun eventually finds out that his bike's thief belongs to the gang of Satya (Ravi Shankar). Satya is a criminal with a difference - unlike the makers of Kurradu, he believes that the general public must not be tortured. Satya's brother consequently revolts against him, and even gets Varun's father beaten up, following which Varun gets back at the villains.

Kurradu is essentially a slow and pointless movie. Fortunately, it's hard to aggravate a lethal combination like that. Unfortunately, the director still manages to do it. There are sad jokes, a lame romance and some bland action. And for the most part, it feels like a documentary on one guy's fascination for a bike, and on what could go wrong with yours when you buy one.

The sub-plot involving the goons seems to have been added to satiate your appetite for action. However, all it does it splatter ketchup all over the place, and we're not sure that does much for anyone's appetite.

The performances are all amateurish, and no one in the cast does anything remarkable enough to rise above the script. Varun Sandesh is enthusiastic, Neha Sharma hardly has a role to play, and the bigger actors - Tanikella, Ali and MS - are wasted.

Few things can be worse than getting caught in a theatre screening this movie, and among them is getting caught in the movie. So hopefully you weren't at Necklace Road or the Golconda Fort when they were making this, because that's where a lot of the scenes were shot. The songs sound like they were on auto-compose or something, but Koti has pitched in with a pleasant background score.

In all, Kurradu is a flick that competes in substance, style and entertainment with the best advertisement slides ever seen in the history of movie intervals.
Share. Save. Connect.
Tweet
KURRADU SNAPSHOT

ADVERTISEMENT
This page was tagged for
padaharella prayam varun sandesh
Kurradu telugu movie
Kurradu reviews
release date
Varun Sandesh, Neha Sharma
Follow @fullhyderabad
Follow fullhyd.com on
About Hyderabad
The Hyderabad Community
Improve fullhyd.com
More
Our Other Local Guides
Our other sites
© Copyright 1999-2009 LRR Technologies (Hyderabad), Pvt Ltd. All rights reserved. fullhyd, fullhyderabad, Welcome To The Neighbourhood are trademarks of LRR Technologies (Hyderabad) Pvt Ltd. The textual, graphic, audio and audiovisual material in this site is protected by copyright law. You may not copy, distribute, or use this material except as necessary for your personal, non-commercial use. Any trademarks are the properties of their respective owners. More on Hyderabad, India. Jobs in Hyderabad.