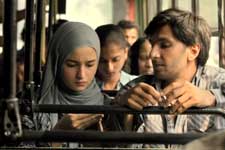 T J Reddy / fullhyd.com
EDITOR RATING
8.5
Performances
Script
Music/Soundtrack
Visuals
9.0
8.0
10.0
8.0
Suggestions
Can watch again
Yes
Good for kids
Yes
Good for dates
Yes
Wait to rent it
No
If we were to distill a moral out of Zoya Akhtar's Gully Boy it would go something like this: "In life, you don't need to apologize for where you're from and where you want to go. All you need to do is dream and have the conviction to work towards it." A simple moral that most of us have heard throughout our lives from sources ranging from friends and family to the innumerable talking heads on TV and those arbitrary chief guests in our annual days at school.

Most of us have tuned these morality lessons out simply because the people telling us these principles just aren't gripping enough as characters. They usually lack cadence, rhythm and charisma, but the universally present fatal flaw is that they talk about the destination without helping us understand the journey.

On the contrary, during the 2-hour 36-minute running time of Gully Boy, you observe the rise of Murad Sheikh (Ranveer Singh) from a lowly, down-trodden, confidence-free, vulnerable, slum-dwelling college student to, well, Gully Boy, the new face of Mumbai's booming hip-hop scene, from very close quarters. The audience is invited to experience his uninviting home and his unsavoury surroundings through the eyes of a bunch of young men and women who choose music as the avenue of expressing themselves, and his breaking out of there slowly but surely.

The populous silver screen that is almost emblematic of the over-populated Section 17 of Dharavi rarely muddles itself with unnecessary sub-plots and unwarranted twists and turns. There is a sense of clarity that is deeply-rooted within Murad and co-writer/director Zoya Akhtar. Lest we forget, there is a laundry list of distractions that threatens to derail Murad from achieving his goals and the film from being a focused narrative, but to their credit the movie and its lead character make lemonade out of the lemons they are afforded by sticking to the Standard Cinematic Underdog Recipe™ while also sprinkling in some identity to make the proceedings interesting and engaging.

These spurts of identity come in the form of Murad's take on the world around him. He is a young man looking for his place in the world. He is not one seeking to create that place for himself by breaking down walls or kicking down doors - he leaves that to his feisty girlfriend Safeena (Alia Bhatt) - but wants to occupy his predestined position by leaving as light a footprint as possible. The reverence he shows to the life he wishes to have, his meek and unrhythmic rendition of his soulful poetry, and the thousand-mile stare he has when confronted with jabs that threaten to smash his veneer of confidence, are all human indicators of the kind of person that comes out from an upbringing such as his.

An array of emotions such as those mentioned above and ones left out of the conversation entirely, because some sequences work better when experienced, are all delightfully brought to life by the inimitable Ranveer Singh. Be it the fearsome warmongering Khilji or the over-the-top Simmba or the Indian version of B Rabbit (there's the 8-mile reference you were waiting for), Singh is an actor for all seasons. Subtle touches such as his foresight to have his character retain a tinge of his childlike wonder and vulnerability even after his cinematic story has concluded solidify this tale as one to remember.

He is ably supported by a fiery female lead performance that jumps rope with the pre-set Alia Bhatt tropes we have grown accustomed to since her debut. Manipulative and strong-willed yet kind and caring, Safeena plays the perfect yin to the subdued Murad's yang.

As the couple grow into the identities they will occupy over the course of their lives, the people who mould said identities are introduced into the film in the form of M C Sher, Music Producer Sky, Aftab and Razia (Murad's parents), and Moeen (Murad's childhood friend), played to perfection by a revelatory Siddhanth Chaturvedi, Kalki Koechlin, Vijay Raaz, Amruta Subhash and Vijay Varma respectively. While some of these seem to make up the numbers in terms of character archetypes, almost all of them are given their share of stories to tell. Each of their trials and tribulations adds venom to Gully Boy's rhymes, and hence is made essential to the narrative at large.

It is this inter-weaving of the bombastic and the personal that makes the visual and auditory presentation of Gully Boy unique. Alternating between the cramped pseudo-streets of Dharavi and the open expanse of a desolate midnight Mumbai, the movie offers a photographic window into what a person from a lower economic stratum sees on a daily basis and how one's hand-made sand castle might pale when compared to a technically proficient skyscraper.

However, the rage one feels at this unfair comparison is channelled into the film's delectable and downright rowdy soundtrack. With an array of artists, spanning the country, coming together to create an auditory experience like no other, Gully Boy's musicality stands head and shoulders above what most mainstream cinema has to offer week in and week out.

And with that, Zoya Akhtar hammers home the importance and relevance of the creative arts in the modern day. She does not use subtle brush strokes and bold colouring that was meant to be reflected upon in a quiet room. No. This is an art form that originated in the streets. Expensive paints are replaced by graffiti, and the story being told and themes being explored shatter the silence of a cinema like a hammer making contact with glass. Gully Boy refuses to be silenced and demands to be heard. Yes, his film, and he in himself, have flaws and are reminiscent of legends past, but it is still oh-so-watchable because of the swagger and humanity with which he presents himself.
Share. Save. Connect.
Tweet
GULLY BOY SNAPSHOT 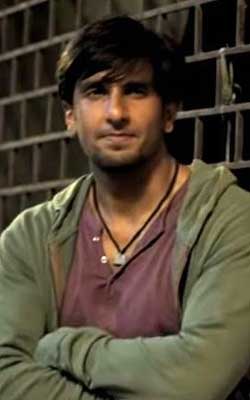 ADVERTISEMENT
This page was tagged for
3gp hindi movie gully boy
gully boy is it meant for kids
gully boy rating for kids
gully boy movie review
gully boy 3GP movie full
Follow @fullhyderabad
Follow fullhyd.com on
About Hyderabad
The Hyderabad Community
Improve fullhyd.com
More
Our Other Local Guides
Our other sites
© Copyright 1999-2009 LRR Technologies (Hyderabad), Pvt Ltd. All rights reserved. fullhyd, fullhyderabad, Welcome To The Neighbourhood are trademarks of LRR Technologies (Hyderabad) Pvt Ltd. The textual, graphic, audio and audiovisual material in this site is protected by copyright law. You may not copy, distribute, or use this material except as necessary for your personal, non-commercial use. Any trademarks are the properties of their respective owners. More on Hyderabad, India. Jobs in Hyderabad.