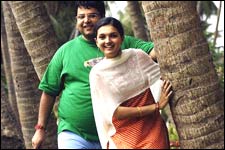 They've just met the well-stocked Karthik (Krishnudu), the boyfriend of Kavya (Saranya Mohan), and want nothing to do with him. That's because they're not broadminded enough. But Karthik makes up for the "broad" part. And he grows on them later. It's just Kavya's dad, Lakshmipati (Rao Ramesh), who's difficult to please. He's an army guy, and doesn't think much of things growing on him, whether it's later or sooner.

Exasperated, he introduces Kavya to a handsome military officer (Bharat Reddy) who has won the Shaurya Chakra. This is not surprising. Anyone who's part of this flick ought to win a Shaurya Chakra. The rest of the movie is about who ends up happy and who ends up with 100 bucks less in their wallets.

Vinayakudu was a cute, charming romantic comedy on how love transcends waistlines. Villagelo Vinayakudu was supposed to be all that and more. However, it is not. Unless we went to a different movie altogether and missed all the action.

Firstly, it's as much a romance as Abhishek Bachchan is Miss World. It's the story of how a family gets around to accepting an unconventional future son-in-law. That would have been very cute, if the characters behaved at least a day older than a quarter of their respective ages. Since they do not, this ends up feeling like an amateurishly put-together school play.

The makers wanted parts of it to be funny and parts to be thought provoking. The comedy is hardly funny, but the movie sure is. And that should be thought-provoking - for the makers, that is. Yandamuri's full-length role as Laskhmipati's well-meaning friend tunes up the silliness by a few notches.

The evidently low budget prevented any real talent from coming onto the screen, as the performances show. Rao Ramesh and Bharat Reddy, hence, are refreshing to watch. The rest are victims of poor direction and poor lines.

And all the fuss about being set amid rich bucolic charm should have been toned down. There are just a few pretty shots of Konaseema, and what you'd like for your next holiday, but that's about it. The banks of the Godavari do nothing much except make it all the more easier for the flick to find a place to rest - several feet under.

The music is among the nicer things about the movie. And like Vinayakudu, it has a charming rehash of a Carnatic hit.

Villagelo Vinayakudu is not going to stand in the way of your weekend plans. Walk around it if it does.
Share. Save. Connect.
Tweet
VILLAGELO VINAYAKUDU SNAPSHOT

ADVERTISEMENT
This page was tagged for
Villagelo Vinayakudu
Villagelo Vinayakudu telugu movie
Villagelo Vinayakudu reviews
release date
Krishunudu, Sharanya Mohan
Follow @fullhyderabad
Follow fullhyd.com on
About Hyderabad
The Hyderabad Community
Improve fullhyd.com
More
Our Other Local Guides
Our other sites
© Copyright 1999-2009 LRR Technologies (Hyderabad), Pvt Ltd. All rights reserved. fullhyd, fullhyderabad, Welcome To The Neighbourhood are trademarks of LRR Technologies (Hyderabad) Pvt Ltd. The textual, graphic, audio and audiovisual material in this site is protected by copyright law. You may not copy, distribute, or use this material except as necessary for your personal, non-commercial use. Any trademarks are the properties of their respective owners. More on Hyderabad, India. Jobs in Hyderabad.