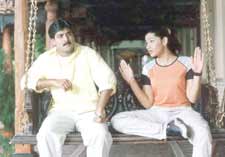 Mithun Verma / fullhyd.com
EDITOR RATING
7.0
Performances
Script
Music/Soundtrack
Visuals
NA
NA
NA
NA
Suggestions
Can watch again
NA
Good for kids
NA
Good for dates
NA
Wait for OTT
NA
Finally, here's a Tollywood film that you can bestow upon some of your concentration, which is these days normally reserved for munching cheese balls in the hall. That also means that you can masticate peacefully without worrying about stuff on screen causing your internals to erupt. This adds two stars all by itself, courtesy the eminence of Telugu films lately.

Sharath Babu and Chandramohan play Pip and Herbert who fancy that their 'dosti' 'badal' into 'rishtedaari' by wanting the former's son and the latter's daughter, Radha (Tarun) and Krishna (Aarti) respectively, to get hitched. There, all that the filmmakers could do to make this theme new-fangled was to toy with the genders of the central characters.

Anyway, the kids disagree on the basis of being each other's prank buddies and nothing else. But they know that we know that they'd be doing it in the end anyway, and so they fall in love. Yawn. To be fair, the first half is filled with cute encounters and re-encounters between Tarun and Aarti. They don't truly appear dissolute together. The film thankfully doesn't have any uncouth college sequences. It proves that a so-called youth picture can be made without those witless scenes.

They then decide it's time for their love to make way for the grave assessment. The predicament this time around is not a factionist, but a philanthropist, Ramchandra (Vishwanath), who saves the public limited company started by Sharath Babu and Chandramohan from going kaput.

Ramchandra wants his grandson to wed Krishna, and so our lovebirds decide to surrender their cage for the sake of their dads and their villas, which owe Ramchandra their lives. There isn't an iota of an electron of the outer most orbital of the surprise element here, and so Ramchandra finds out about their affection. He concurs that the hero and heroine sacrificing their love will supersede crucifixion, and hence blesses them to say I do.

Tarun is a bright young chap and he's done well in this film, too. And as for Aarti, we all know that milk does a body good, but damn, girl, how much have you been drinking? It would've been icing on the cake if her acting skills also had those engaging dimples. A lot of characters like Laya and her uncle are wasted in narrating a fairly straightforward copy. The comedy track of Sunil, who's been the roar of Andhra since Premaku Velaayera, is likeable. Most of the flick is lighthearted and cheerful.

The music is delightful. R P Patnaik comes up with another masterpiece after Nuvvu Nenu and Manasantha Nuvve. The cinematography in the song Premo Yemo is outstanding. The most popular song might probably be the one sounding a little like Main Tho Aarti Utaarun Re Santhoshi Maathaaki, with the dandia beats.

It appears like Kasi Vishwanath was also among the defaulters of Krushi. He makes references to it a couple of times and then shows how if D Venkateshwar Rao had a bubbly daughter, a rich whacko would've paid off the debts. Although the story is stale, the feel of the movie is generally pleasant. This one wins by a walkover in the absence of grossness. Take it or leave it.
Share. Save. Connect.
Tweet
NUVVULEKA NENULENU SNAPSHOT

See Nuvvuleka Nenulenu full details
NUVVULEKA NENULENU USER REVIEWS
1 - 11 OF 11 COMMENTS
POSITIVE  |  NEGATIVE |  NEWEST  |  OLDEST  |  MOST HELPFUL  |  LEAST HELPFUL
USER RATING
6.5
55 USERS
Performances
Script
Music/Soundtrack
Visuals
NA
NA
NA
NA
Can watch again - NA
Good for kids - NA
Good for dates - NA
Wait for OTT - NA
Swati Reganti on 9th Jun 2002, 9:35pm | Permalink
i loved the movie very much since tarun acted very well and arti did a great job and sunil was the comedy actor but arti needs to loose a little weight and i think she has for other movies that she is starrin in but otherwise excellent movie!
RATING
10
Saini Preeti on 1st May 2002, 6:51am | Permalink
Movie is great,I really liked n njoyed every part of it,n even songs are good too, n the cast is good too especially tarun,he was handsome n aarti ,"hey this is for u pls loose some weight. u look too fat in this movie. so if u wann be in the industry for a while, then u got to watch out for ur weight no offense ok."
who ever see my rating my advice to them is to go n watch the movie n decide forurself
RATING
10
Ravi on 11th Apr 2002, 2:06am | Permalink
Movie is good. Songs are good. We had fun. I guess Tarun and Aarti puton lot of weight.
RATING
8
Raj A, on 4th Mar 2002, 11:13pm | Permalink
You are right Ananth... the days of good and great are long gone!!!
Yet, the director seems to have made a good attempt at making a thin story line into passable entertainment.
R.P's music, as usual reminds you through out of two songs 'naa lo unna prema neetho ceppana' and 'eto vellipoyindi manasu'!!!!
The comedy tracks are not *too* parallel to the main story. Sunil is a welcome change to the comedy scence of the telugu films today.
Tarun's potential seems to be wasted... but then, what can one do with such a thin storyline?
If you have nothing else to do... 'Nuvvuleka' is a good time pass - atleast, you will find your hair intact on your head after you are done with the movie.

ADVERTISEMENT
This page was tagged for
Nuvvuleka Nenulenu telugu movie
Nuvvuleka Nenulenu reviews
release date
Tarun, Aarti Agarwal
theatres list
Follow @fullhyderabad
Follow fullhyd.com on
About Hyderabad
The Hyderabad Community
Improve fullhyd.com
More
Our Other Local Guides
Our other sites
© Copyright 1999-2009 LRR Technologies (Hyderabad), Pvt Ltd. All rights reserved. fullhyd, fullhyderabad, Welcome To The Neighbourhood are trademarks of LRR Technologies (Hyderabad) Pvt Ltd. The textual, graphic, audio and audiovisual material in this site is protected by copyright law. You may not copy, distribute, or use this material except as necessary for your personal, non-commercial use. Any trademarks are the properties of their respective owners. More on Hyderabad, India. Jobs in Hyderabad.