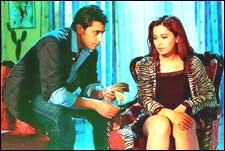 Deepa Menon / fullhyd.com
EDITOR RATING
5.0
Performances
Script
Music/Soundtrack
Visuals
NA
NA
NA
NA
Suggestions
Can watch again
NA
Good for kids
NA
Good for dates
NA
Wait for OTT
NA
Woh is a thriller, with lots of twisted twists, some really wonked red herrings, plus one woman in a wet cotton shirt, rubbing up against a Ferrari. The car turns a bright red in embarrassment but the babe just will not quit. Much like the plot of this film.

One of the things that make bad films bad is that they're so predictable. But Woh shows us that it's possible to maintain the same high standards of inanity by being unpredictable. The storyline (and your cue to run for cover):

Shekar (Priyanshu Chatterjee) is a carefree soul from Goa who comes to Mahabaleshwar looking for job. Unfortunately he's not the only one; apparently this small town is filled with hot career opportunities for enterprising youth. Especially if they're open to the idea of committing murder. So Shekar gets mistaken for another man of the same description and before he has the chance to rearrange his features to register shock, he is given a great big wad of cash and sent out on an assignment to kill some guy's niece.

But being an honest man, Shekar not only doesn't kill Sonali, the girl in question (Cleo Isaacs), but also spills the beans on her villainous uncle. And, of course, falls for her like a ton of bricks. Sonali doesn't seem to have any strong feelings about anything in particular, and goes through the entire film looking like a deer caught in the headlights of an oncoming truck. A couple of times she even makes you wish you were the one driving that truck.

Shekar leaves the scene with his heart in her hands, and, on her insistence, her uncle's money in his wallet. Then, like any self-respecting guy, he goes out and gets royally sloshed. Which means that when a man steps in front of his jeep, he's unable to do anything but scream in horror and run straight into him. There's a lesson in here for all of us, i.e. before you panic and confess to killing a man you've run over, check him for bullet wounds.

Turns out this man was shot before he got run over, but still insisted on walking to the middle of the road, just to make Shekar look bad. Our hero gets caught by the police, and - horror of horrors - the chief inspector of the place is none other that the villainous uncle. So Shekar, who is quite a shrewd guy for the hero of a flick, escapes police custody and runs straight into a hearty Punjab da puttar, Ambarsari, from the CBI.

Unluckily for Shekar, Amabarsari is the original killer he was mistaken for and CBI stands for Criminal By Inspiration (which, we must admit, is truly inspired). This little acronym and Ayub Khan are the two good things that the movie has going for it, although you should let neither stop you from leaving during the interval.

Shekar manages to escape from this predicament also, by the simple process of showering currency notes in a bar and getting away in the grabbing frenzy. He rescues Sonali, they run far away and we never hear of them again. Ha, you wish.

We are, by the way, only half-way through the movie at this point. The second half gets even more muddled with the same general motif: bad guys smart, good guy smarter. The problem is we're not used to our heroes being clever, and on the whole, it doesn't suit them.

One thing's for sure - the scriptwriter had a blast with this film. He's devoted his entire time to planting surprises and being a smartass. As a result there's not much of a story to sink your teeth into. But hey, at least your talons get a workout.
Share. Save. Connect.
Tweet
WOH SNAPSHOT

ADVERTISEMENT
This page was tagged for
Woh hindi movie
Woh reviews
release date
Priyanshu Chatterjee, Cleo Isaacs
theatres list
Follow @fullhyderabad
Follow fullhyd.com on
About Hyderabad
The Hyderabad Community
Improve fullhyd.com
More
Our Other Local Guides
Our other sites
© Copyright 1999-2009 LRR Technologies (Hyderabad), Pvt Ltd. All rights reserved. fullhyd, fullhyderabad, Welcome To The Neighbourhood are trademarks of LRR Technologies (Hyderabad) Pvt Ltd. The textual, graphic, audio and audiovisual material in this site is protected by copyright law. You may not copy, distribute, or use this material except as necessary for your personal, non-commercial use. Any trademarks are the properties of their respective owners. More on Hyderabad, India. Jobs in Hyderabad.