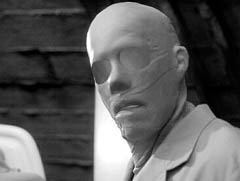 Pratima Agnihotri / fullhyd.com
EDITOR RATING
7.0
Performances
Script
Music/Soundtrack
Visuals
NA
NA
NA
NA
Suggestions
Can watch again
NA
Good for kids
NA
Good for dates
NA
Wait for OTT
NA
"We are the hollow men, we are the stuffed men," wrote T S Eliot in a scathing critique of the 20th century. Never would his words ring as true as now, when the proliferating progress of science helps man play God. How hollow this power is when an amoral genius manipulates it! This Frankenstein dilemma is what Verhoven analyses in "Hollow Man".

The performances are adequate. Elisabeth Shue cannot really generate another Academy award nomination performance given the limitations of the genre. Kevin Bacon conveys Sebastian's dare devilry, but cannot add any depth to the character as the script itself lacks it. In brief, watch "Hollow Man" if you are the type who freaks out on the ethics of science presented in a visually powerful way.
Share. Save. Connect.
Tweet
HOLLOW MAN SNAPSHOT

ADVERTISEMENT
This page was tagged for
hello manEnglish movie
Hollow Man english movie
Hollow Man reviews
release date
Elisabeth Shue, Kevin Bacon
Follow @fullhyderabad
Follow fullhyd.com on
About Hyderabad
The Hyderabad Community
Improve fullhyd.com
More
Our Other Local Guides
Our other sites
© Copyright 1999-2009 LRR Technologies (Hyderabad), Pvt Ltd. All rights reserved. fullhyd, fullhyderabad, Welcome To The Neighbourhood are trademarks of LRR Technologies (Hyderabad) Pvt Ltd. The textual, graphic, audio and audiovisual material in this site is protected by copyright law. You may not copy, distribute, or use this material except as necessary for your personal, non-commercial use. Any trademarks are the properties of their respective owners. More on Hyderabad, India. Jobs in Hyderabad.